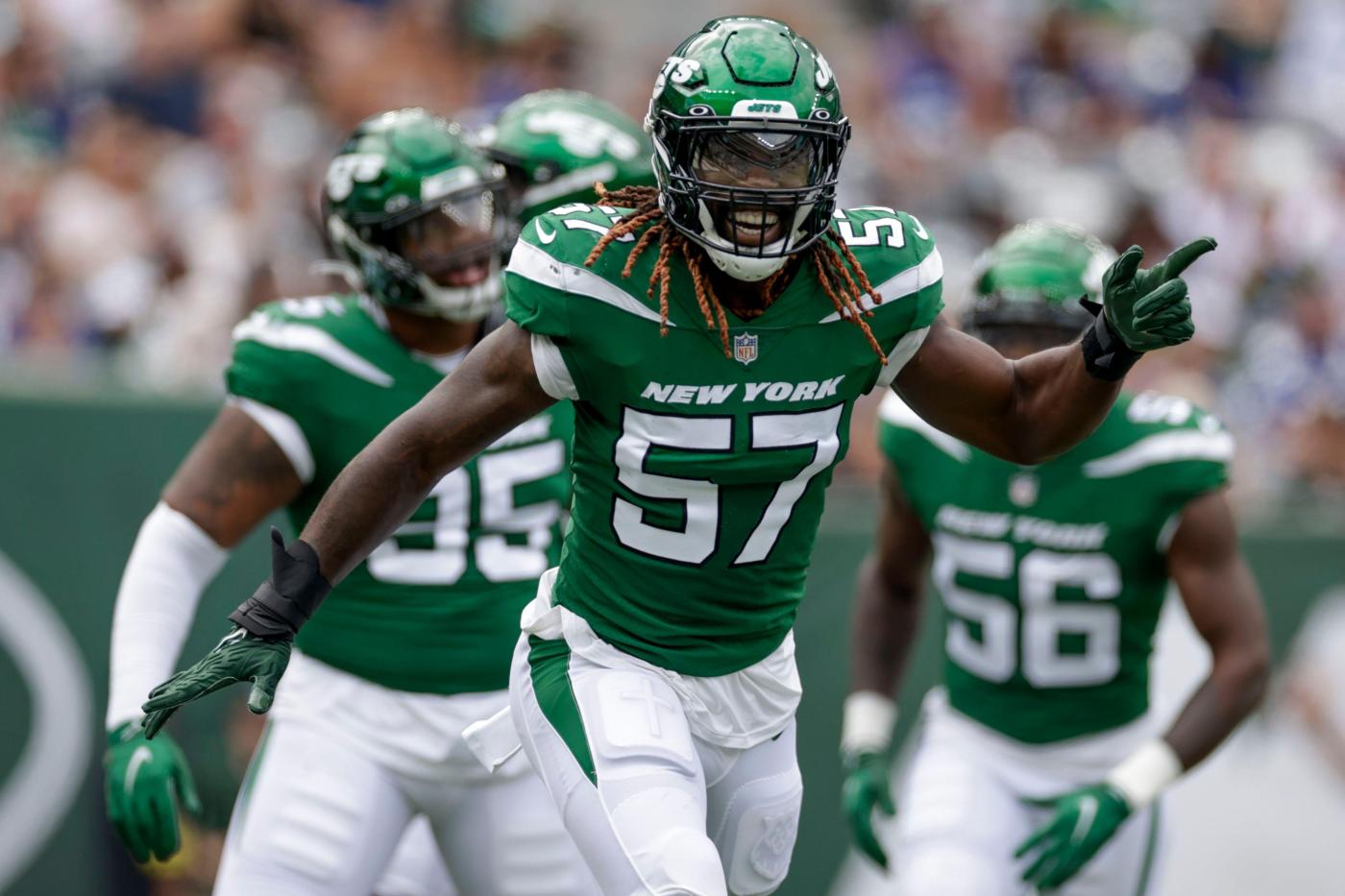 The Ravens’ 2022 season doesn’t kick off until Sunday, and already one of the NFL’s biggest storylines belongs to them.

With quarterback Lamar Jackson and Ravens officials failing to agree to an extension before Friday’s deadline, the league’s most scrutinized contract talks will be suspended until next offseason. Jackson, the 2019 NFL Most Valuable Player, was already coming off the most disappointing and painful season of his career. Now, as he plays out the final year of his rookie contract, every game will become a referendum on his value to the franchise.

Jackson’s first start since Dec. 12 will come against the New York Jets at MetLife Stadium. Here’s what to watch in their Week 1 matchup.

1. The Ravens team that awaits new starting quarterback Joe Flacco on Sunday doesn’t look much like the one he left after the 2018 season. Just 12 Ravens on that year’s roster are still on the team, two of whom — defensive linemen Michael Pierce and Brent Urban — returned within the past year. Two former teammates, defensive back-linebacker Anthony Levine Sr. and punter Sam Koch, are now on the Ravens’ coaching staff.

“There are some players that are still there,” Flacco said on “The Official Jets Podcast” this week. “But if you’re talking about the bulk of my career, and the guys that I actually played with, in terms of that, it’s a completely new football team. It’s just the same organization. So you know, sometimes we make too big of a deal out of these things and stuff like that. Guys switch teams all the time. You know, I think I’m a quarterback, so obviously, it’s a little bit different, for whatever reason. And Coach [John] Harbaugh is still there, but a lot of the coaching staff is probably pretty similar.”

2. A decade ago, after declining a contract extension, Flacco entered his fifth season in Baltimore without any long-term security. Then he led the Ravens to their second Super Bowl title with a historic run of playoff production. Less than a month later, he signed a six-year extension that briefly made him the highest-paid player in NFL history. With Jackson now set to play this season on the final year of his own rookie contract, Flacco was asked Wednesday whether he could relate to Jackson “betting on yourself.”

“I think it makes for a decent story, one way or the other,” he told local reporters. “At the end of the day, I didn’t really view it as betting on myself, and therefore, I didn’t really have to put any extra pressure on myself. I was confident in the player that I was and what was going on at that time and what it all is.

“I’m sure he feels the same way. He’s confident in the player that he is, and he’s going to be that player and all that. So I think at the end of the day, he probably feels like it’s all going to settle where it should as long as he continues to play football. So I know people like to talk about that and bet on yourself, but I don’t think that we really look at it that way. I just think that we kind of look at ourselves as the football players that we are and see what’s out there and know the nature of the business. It just kind of is what it is when it comes to contract talks.”

3. The Ravens’ thin outside linebacker room should get some help Saturday, when practice squad players Steven Means and Kyler Fackrell are eligible for promotion to the active roster. But Odafe Oweh and Justin Houston could also get some relief Sunday from defensive lineman Calais Campbell, who can function as a hand-in-the-dirt edge rusher. The 36-year-old was disruptive there early in his career and played 67 snaps in outside alignments last season, according to Pro Football Focus.

“You’re going against tight ends, and tight ends can’t block me in this league,” Campbell said Wednesday with a laugh. “But at the end of the day, though, I’ll play wherever they put me. I just want to get out on the field and try to help the team win football games. … We did a little bit of it in camp, and I think it looked really good. I felt just at home doing it, like I used to, so it’s no big deal.”

4. In the Ravens’ final road game of 2021, their struggling defense, depleted by injuries and the coronavirus, allowed a franchise-worst 498 passing yards in a Week 16 blowout loss to the Cincinnati Bengals. They should be better prepared Sunday against a talented receiving corps led by a recent big-money signing (wide receiver Corey Davis), two recent top-35 draft picks (wide receivers Elijah Moore and Garrett Wilson) and two tight ends coming off career years (Tyler Conklin and C.J. Uzomah).

Marcus Williams, Chuck Clark and rookie Kyle Hamilton form one of the NFL’s most versatile safety trios. Cornerback Marlon Humphrey is back to full strength and had an impressive training camp. Even if fellow starter Marcus Peters (knee) is limited or unavailable, the Ravens can turn to Kyle Fuller and Brandon Stephens out wide. And defensive coordinator Mike Macdonald said Thursday that he’s comfortable playing rookies Damarion “Pepe” Williams and Jalyn Armour-Davis, fourth-round picks who missed time in the preseason with injuries but were full participants this week.

5. Rashod Bateman’s first big showdown of his second season might end up as more of a sideshow. The Ravens’ top wide receiver could spend much of Sunday’s game in a different neighborhood than rookie cornerback Ahmad “Sauce” Gardner, the Jets’ No. 4 overall pick and a projected starter.

Bateman lined up on the left side of the Ravens’ offense on over 72% of his snaps last season, according to Rotowire. Gardner, meanwhile, played all 31 of his defensive snaps this preseason at left outside cornerback, according to PFF, meaning he faced right-sided receivers. In the Jets’ “Cover 3″-heavy scheme, which drops three deep defensive backs into deep zones, outside cornerbacks typically stick to one side before the snap.

6. In August, the Jets lost starting left tackle Mekhi Becton to a second straight season-ending knee injury. On Friday, his replacement, free-agent signing Duane Brown, was ruled out of Week 1 with a shoulder injury. Now starting right tackle George Fant, who impressed at left tackle after replacing the injured Becton last season, will return there Sunday. Rookie Max Mitchell, a fourth-round pick who graded out poorly in the preseason, according to PFF, will start at right tackle.

The Jets’ musical chairs up front could make Flacco a sitting duck for edge rushers like Odafe and Houston. “You’re not playing a rushing quarterback, let’s just put it that way,” ESPN analyst Matt Bowen said in a recent interview. “You start moving late rotations [in coverage], you’re going to see it fast and get the ball out, try to be efficient with the ball. But Joe Flacco is not a high-end mover, and I would heat him up. That’s what I would do as a defensive coordinator. I’d go after him.”

“If we play well, it will show, and I do believe our guys will go out and they will play well,” Ravens special teams coordinator Chris Horton said Thursday. “It’s just one of those things. They are a good football team; they have good players. It’s going to be for our guys to create the matchups and the things we want to see. Sunday is Sunday, and we’ll find out once we actually get out there and see the guys out on the field.”

8. The Ravens and Jets share another distinction, this one unwanted: They were the NFL’s two most injured teams last season. While the Ravens finished 2021 with the most “adjusted games lost” in Football Outsiders’ two decades of charting — a metric that accounts for the relative value of starters — the Jets actually had more games lost on defense. Defensive ends Carl Lawson and Vinny Curry missed the entire season. Safeties Lamarcus Joyner and Marcus Maye played in just seven games total.

The Ravens are still getting back to full strength, with left tackle Ronnie Stanley, running back J.K. Dobbins and Peters all either questionable or doubtful for Sunday’s game. Running back Gus Edwards, tight end Charlie Kolar and outside linebackers Tyus Bowser and David Ojabo will miss at least the first four games.

9. Devin Duvernay could be one of the busiest players inside MetLife Stadium on Sunday, and in every week the Ravens play after that. Already the team’s top kickoff and punt returner, Duvernay is now expected to start at wide receiver alongside Bateman. He played at least 60 combined snaps in just two games last season. With a more regular workload on offense, that could be the norm.

“He can handle everything that we ask of him,” Harbaugh said Friday. “There’s no doubt about that. And then we’ll try to ask of him the right amount. So however that shakes out, we’ll see.”

10. Sunday will mark Jets inside linebacker C.J. Mosley’s first game against the Ravens since leaving Baltimore after the 2018 season to sign a five-year, $85 million deal. Mosley, a four-time Pro Bowl selection with the Ravens, took a while to get going in his new home. A groin injury limited Mosley to two games in 2019, and he opted out of the 2020 season amid the coronavirus pandemic. Last season, he finished fourth in the NFL in tackles with a career-high 168.

But Mosley’s pass defense was a glaring issue. According to Pro Football Reference, he was targeted 68 times in coverage in 2021 and allowed 58 completions (85.3% accuracy) for 525 yards and three touchdowns. Tight ends last season regularly hurt the Jets, who had the second-worst efficiency in the NFL when defending the group, according to Football Outsiders. That bodes well for the Ravens’ Mark Andrews and Isaiah Likely.

11. Two former Bengals standouts could loom large Sunday. Uzomah had 49 catches for 493 yards last season for Cincinnati, with over a quarter of his yardage coming against the Ravens. He had three catches for 91 yards in Week 7, shedding Humphrey for a 55-yard catch-and-run score, and five catches for 36 yards in Week 16. Uzomah signed a three-year, $24 million contract with the Jets in March.

Lawson, who agreed to a three-year, $45 million deal in 2021, had less success in his AFC North days. In seven games against the Ravens from 2017 to 2020, he had just one sack and six quarterback hits. He missed all of last season with a torn Achilles tendon but is expected to play Sunday, likely lining up across from Ravens left tackle Ja’Wuan James. Jets defensive coordinator Jeff Ulbrich said Lawson’s physical ability makes him a “unicorn.” “We missed him last year, we’re excited to have him back, we really are,” Ulbrich said Thursday, “and I know he’s excited, too.”

12. Jackson needs 33 passing yards Sunday to reach 10,000 for his career. He would become the fastest quarterback in NFL history to record 10,000 passing yards and 3,500 rushing yards (59 games), marks only seven others have reached. With another 100-yard rushing performance, he’d also set an NFL regular-season record for the most by a quarterback, breaking his tie with Michael Vick (10).

Bateman needs four catches Sunday to become the fastest player in Ravens history to reach 50 in his career (13 games). In 2011, wide receiver Torrey Smith (Maryland) had 50 receptions over his 16-game rookie season.

13. Under Harbaugh, the Ravens are 10-4 in season openers and have won five of their past six. Harbaugh’s .714 winning percentage in Week 1 is tied for the NFL’s third-best mark since he took over in 2008.

Winning on Sunday, Harbaugh said, is “important. It’s 1-0. There’s a big difference if you go 0-1. Then you have to win two in a row to get back to where you would have been if you had won in the first place. That’s kind of the math of it. So it’s a big deal.”