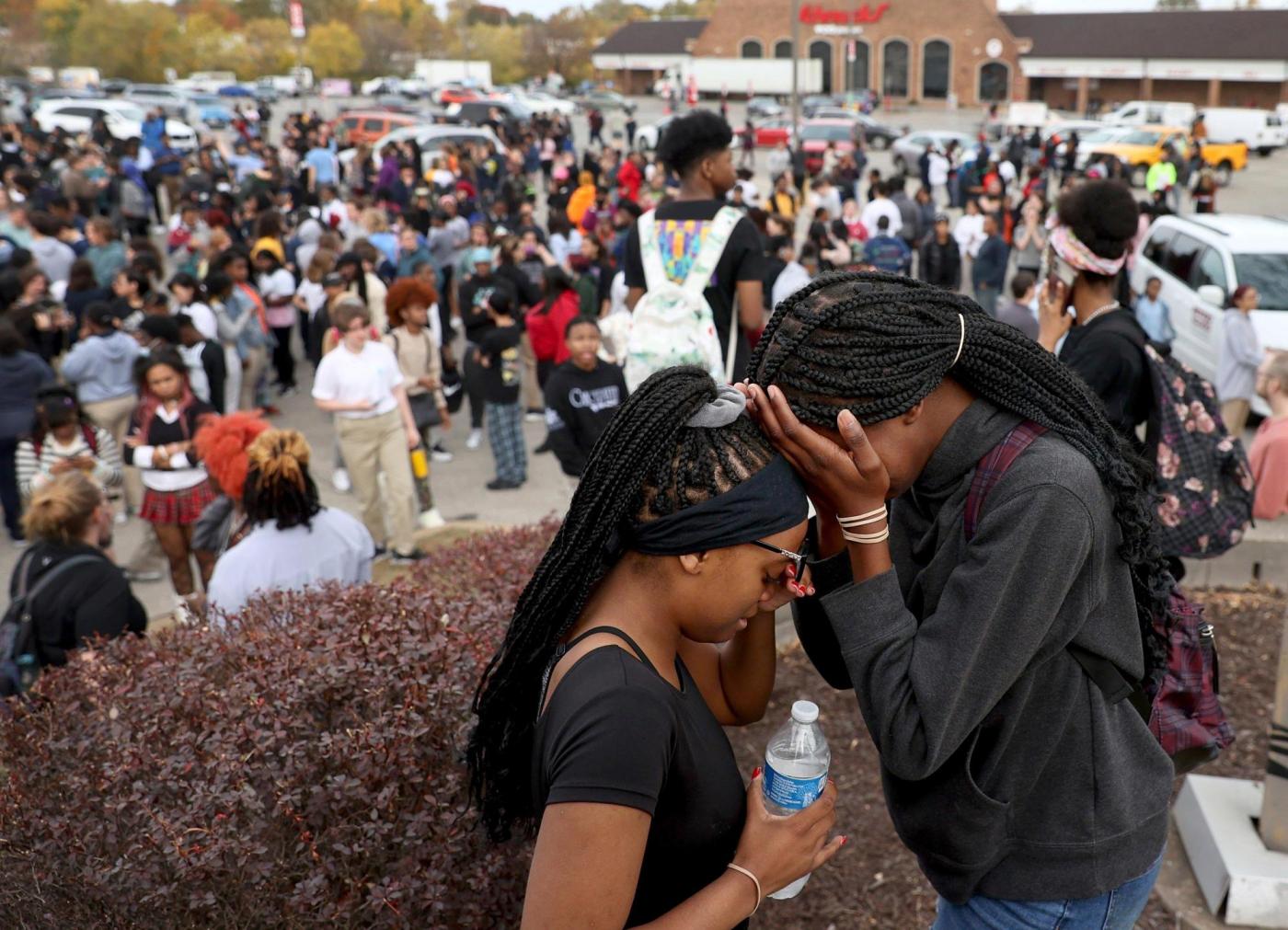 By MICHAEL PHILLIS and JIM SALTER

ST. LOUIS (AP) — A gunman broke into a St. Louis high school Monday morning, fatally shooting a woman and a teenage girl and wounding six others before police killed him in an exchange of gunfire.

The shooting just after 9 a.m. at Central Visual and Performing Arts High School forced students to barricade doors and huddle in classroom corners, jump from windows and run out of the building to seek safety. One terrorized girl said she was eye-to-eye with the shooter before his gun apparently jammed and she was able to run out.

Others inside the school said they heard the shooter declare: “You are all going to die.” The city’s police chief said fast actions by a security guard and police officers who “ran to the gunfire” helped end the shooting before more people were killed or hurt.

Speaking at a news conference, Police Chief Michael Sack said the shooter was about 20 years old but did not provide a name for him or his victims. He declined to say if the woman killed was a teacher.

St. Louis Schools Superintendent Kelvin Adams said seven security guards were in the school at the time, each at an entry point of the locked building. One of the guards noticed the man trying to get in at a locked door, but couldn’t. The guard notified school officials and ensured police were contacted, Sack said.

“It was that timely response by that security officer, the fact that the door did cause pause for the suspect, that bought us some time,” Sack said.

He declined to say how the man eventually got inside, armed with what he described as a long gun. Central Visual and Performing Arts shares a building with another magnet school, Collegiate School of Medicine and Bioscience, which also was evacuated. Central has 383 students, Collegiate 336.

Officers worked to get students out of the three-story brick building, then “ran to that gunfire, located that shooter and engaged that shooter in an exchange of gunfire,” killing him, Sack said.

Monday’s school shooting was the fortieth this year resulting in injuries or death, according to a tally by Education Week — the most in any single year since it began tracking shootings in 2018. These include the killings at Robb Elementary School in Uvalde, Texas, in May, when 19 children and two teachers died. Monday’s St. Louis shooting came on the same day a Michigan teenager pleaded guilty to terrorism and first-degree murder in a school shooting that killed four students in December 2021.

Some of the six people hospitalized suffered gunshot wounds, while others were struck by shrapnel, Sack said. He did not provide any information on their conditions.

One student, 16-year-old Taniya Gholston, told the St. Louis Post-Dispatch she was in a room when the shooter entered.

“All I heard was two shots and he came in there with a gun,” Gholston said. “And I was trying to run and I couldn’t run. Me and him made eye contact but I made it out because his gun got jammed. But we saw blood on the floor.”

Ninth-grader Nylah Jones told the Post-Dispatch she was in math class when the shooter fired into the room from the hallway. The shooter was unable to get into the room and banged on the door as students piled into a corner, she said.

Janay Douglas’ 15-year-old daughter got stuck in a hallway when the school was locked down. Douglas said she received a call from her daughter letting her know she had heard shots.

“One of her friends busted through the door, he was shot in the hand, and then her and her friends just took off running. The phone disconnected,” Douglas said. “I was on my way.”

The school district placed all of its schools on lockdown for the remainder of the day, and canceled all after-school activities, including sports.

Central Visual and Performing Arts High School is a magnet school specializing in visual, musical and performing arts. The district website says the school’s “educational program is designed to cre­ate a nurturing environment where students receive a quality academic and artistic education that prepares them to compete successfully at the post-secondary level or perform competently in the world of work.”