Todays Though > News > 3 things we heard from the Chicago Bears, including Lucas Patrick’s season-ending toe surgery and Justin Fields’ apology to the defense
News

3 things we heard from the Chicago Bears, including Lucas Patrick’s season-ending toe surgery and Justin Fields’ apology to the defense 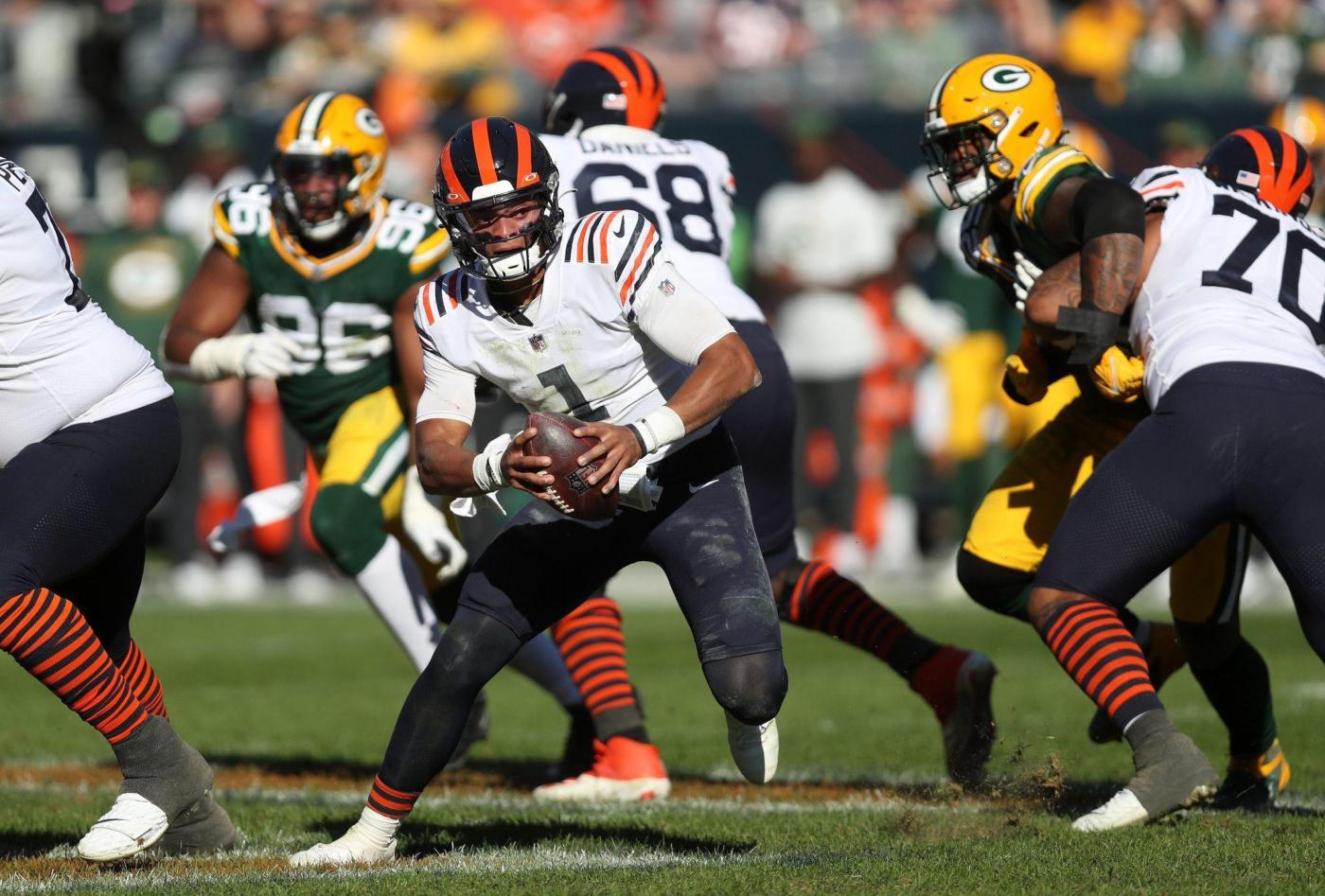 Along with Fields’ update on his left shoulder injury, here are three things we learned.

Patrick hasn’t played since he left the Oct. 24 win against the New England Patriots with the injury. The Bears put him on injured reserve that week, and Sam Mustipher has started at center the last four games.

It was Patrick’s second surgery in four months. He had surgery on his hand during training camp and couldn’t snap the ball — and therefore play center — early in the season. He spent the first two games in a right guard rotation with Teven Jenkins, then started two games at right guard and two at left guard.

His lone start at center — the position the Bears signed him to play— was the game during which he was injured. He played only 10 snaps in that game.

Eberflus said Patrick still has been around Halas Hall helping an offensive line that has started seven combinations of players this season.

“He’s been in every meeting, been engaged,” Eberflus said.

Poles talked multiple times about viewing Patrick as a tone setter, but now Patrick must do that from the sideline.

“You can feel his effect already,” Poles said in April. “He’s got energy. He’s got toughness. There’s just a presence about him. And then you can feel everyone else coming. And that was the thought process was these catalysts that kind of bring the whole group along.”

2. Fields apologized to the defense after the Bears’ 27-24 loss to the Atlanta Falcons.

Before Fields rode a cart from the locker room to get an X-ray on his shoulder Sunday, he told his defensive teammates he was sorry for not coming through on the final drive. The defense held the Falcons to a field goal with two minutes to play. But the Bears offense managed just three plays, with Fields throwing an interception on third down to seal the Falcons win.

“Any time we have that opportunity to either go tie the game or even go win the game, we want to do that,” Fields said. “So I apologized to those guys, especially for that game-ending pick. I felt like they did their job in terms of holding them to a field goal … so we needed to then score a touchdown.”

Fields said safety Eddie Jackson stopped him and said, “The game is not won or lost with one play. We all have to be better.”

“I play pretty much for those guys in the locker room,” Fields said. “I see how much work they put in each and every day. So just having them as my teammates, having the leaders we do have on this team, be there for everybody and lead like they do. It’s a big example of how our team is and how we’re built and what our culture is here.”

The apology was in direct contrast to now-benched Jets quarterback Zach Wilson, who replied “no” when asked if he let his defense down in a 10-3 loss Sunday to the New England Patriots.

“For him to do that, that’s bold,” linebacker Nicholas Morrow said. “And you like that, that’s a good leadership quality to take that type of responsibility and accountability. But at the same time, there’s 11 men on the field at a time, and we’ve all got to take responsibility.”

3. Right guard Teven Jenkins was estimated to practice in full at the Bears walkthrough.

The Bears didn’t hold a full practice Wednesday as they recover from what Eberflus said has been a stretch of physical games. So their injury report gave estimated statuses.

Jenkins was listed as full participation after he sat out his second straight game Sunday. Jenkins was active but didn’t play, and Eberflus said the second-year lineman was an emergency backup. Jenkins said last week that he has been managing a hip issue since the beginning of the season.

Jenkins’ status will be worth monitoring Thursday. Michael Schofield has started in Jenkins’ place.

Along with Fields being limited, the Bears had three players who didn’t practice while in the concussion protocol: safety Jaquan Brisker, cornerback Kyler Gordon and linebacker Sterling Weatherford.