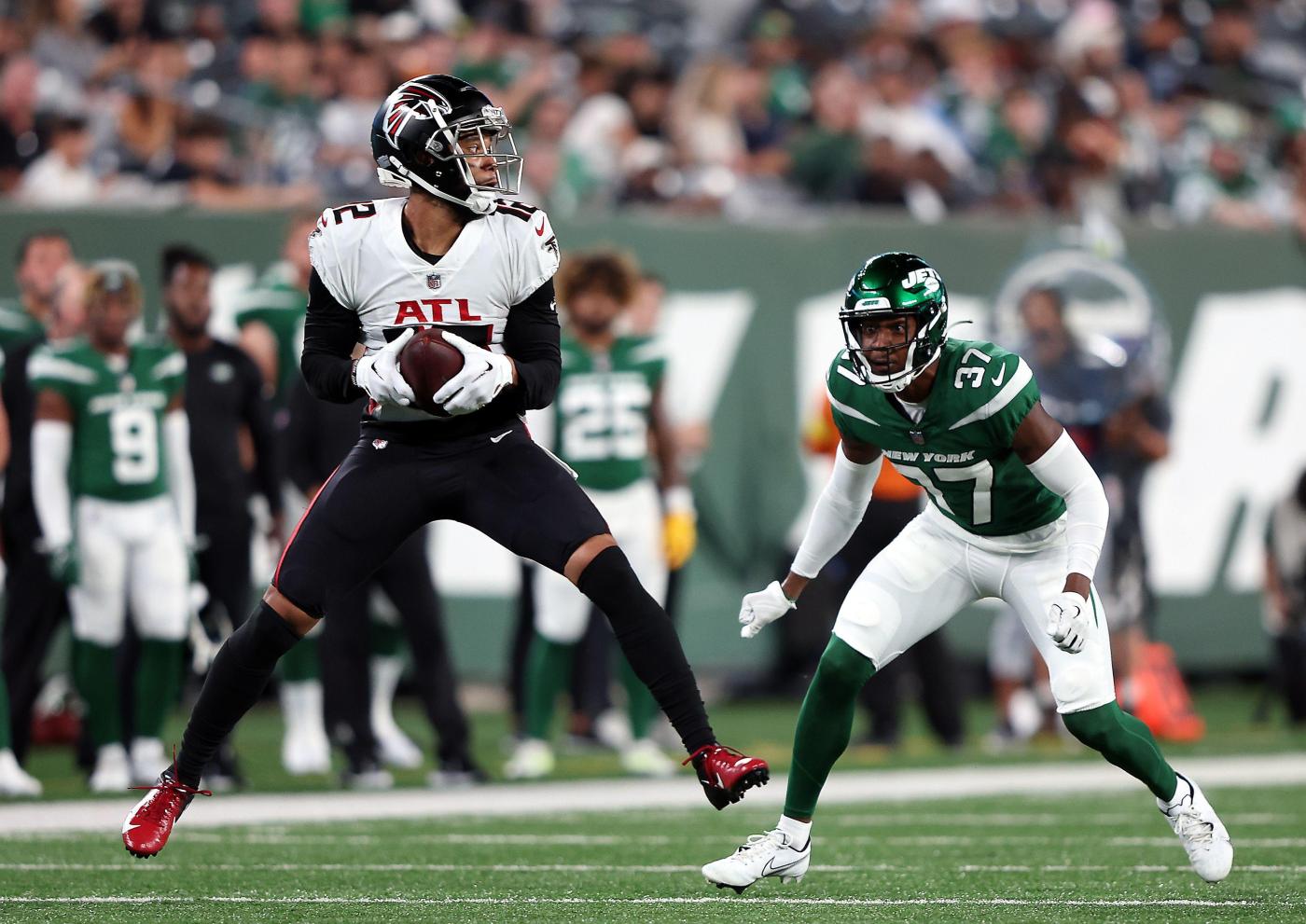 With the Jets scheduled to have a joint practice against the Giants Thursday afternoon, Jets coach Robert Saleh thought it would be better to rest the players with a shorter week ahead.

“I want to treat this week as a dress rehearsal,” Saleh said about the upcoming game against the Giants. “I felt like it would be a heavy load to play in this game, practice Thursday, have a dress rehearsal and call it a preseason.”

But even with many starters out of the lineup, there was still plenty to take away from the Jets’ win over the Falcons.

Bryce Hall had a rough night in the secondary

Hall started at cornerback opposite Ahmad “Sauce” Gardner and the Falcons were obviously targeting the former Virginia Cavalier. On the opening drive, Falcons quarterback Marcus Mariota completed a 52-yard pass to tight end Kyle Pitts on the left side against Hall, which set up a field goal.

On the next possession, Atlanta completed two passes with Hall in coverage, including a 13-yard touchdown reception by Olamide Zaccheaus.

“Poor vision, poor eyes,” Saleh said. “The two plays that we gave up were big plays. Overall, we held them to three points on the first explosive play and the second one, we gave up a touchdown and we had them go three and out versus their guys.

“Overall, it was two plays, but it was kind of a lesson that if you give up explosive plays in this league, you’re going to give up points 90% of the time.”

Hall entered the preseason in a cornerback competition with Gardner. He did nothing to help his case against the Falcons as they rarely looked Gardner’s way. Meanwhile, Hall missed a couple of assignments in coverage on long pass plays. He also had a holding penalty that was declined on a pass play to Damiere Byrd in the second quarter.

The rest of the Jets secondary wasn’t a lot better as they allowed 275 passing yards in the first half. Last season, the Jets defense was 30th in the league in passing defense. That’s the primary reason New York drafted Gardner in the first place. After Monday night’s game, it’s time to end the charade and start Gardner opposite DJ Reed in Week 1 against the Baltimore Ravens.

Jets offense was flat with Mike White under center

While the Falcons’ first-team offense was able to move the ball, the Jets second-stringers couldn’t do the same. Mike White, who started the game for Joe Flacco, looked flat as he finished 12-for-17 for 90 yards. It wasn’t until Chris Streveler entered the game that the Jets offense showed life after he threw a 34-yard touchdown pass to Lawrence Cager.

The Jets rushing attack was nonexistent as they registered 70 yards on the night, with 33 of them coming from Streveler.

“It was one of those preseason games where you couldn’t get into a rhythm,” White said. “There was some things going on, presnap, postsnap penalties that kind of hindered that.

“Those are the type of games where you can kind of fall into the trap of trying to force things and making too much that’s not there as a quarterback and start throwing unnecessarily interceptions. From that aspect, I was happy with how I took care of the football.”

Yes, many starters had the night off, but during the joint practices last weekend, the Jets second and third teams didn’t have a lot of problems gaining yards against the Falcons defense. That certainly wasn’t the case during this game.

Jets were a different team after halftime

After allowing 16 points in the first half, the Jets offense and defense looked completely different after halftime.

New York scored 21 unanswered points to take a 24-16 lead in the fourth quarter. Not only did Streveler perform well by completing 8 of 11 passes for 119 yards with one touchdown and an interception, but the Jets defense and their secondary was stingy in the second half.

New York allowed just 74 yards during the final 30 minutes. The most significant moment of the game defensive was when Bradlee Anae sacked Feleipe Franks and forced a fumble in, which he recovered and scored a touchdown.

“For them to fly around making plays and doing what they were doing, we are feeding off that offensively too,” Streveler said. “We go down and get a touchdown and then we can feel the energy shift. Everyone is just feeding off that.

“That’s the nature of football, there are ebbs and flows in a game and you can try not to ride that wave when you’re low. But when you’re on the high side of that, you try to ride that momentum and continue making plays.”

Jets have an upcoming decision with Denzel Mims

One of the strengths of the Jets offense is their receiver corps with Elijah Moore, Garrett Wilson, Corey Davis, Braxton Berrios, Jeff Smith and Calvin Jackson. That’s why the Jets must make the difficult decision and cut bait with Denzel Mims.

Against the Falcons, Mims did have three catches for 43 yards, but it appeared the Jets were showcasing Mims on special teams for possibly other teams to see. Either way, it is difficult seeing Mims making the Jets’ 53-man roster.

That’s why it’s probably in the team’s best interest now to either trade Mims before Tuesday’s cut down from 85 to 80 players for release him now. Unlike last season, the Jets are in a good spot at receiver and the team doesn’t have to rely on Mims on special teams or offensively.

Ahead of Tuesday’s roster deadline, the Jets settled their kicking competition.

Gang Green released Eddy Pineiro, the team’s kicker at the end of last season. The Jets will now move forward with veteran Greg Zuerlein as their kicker.

During the last couple of seasons, the Jets have had a revolving door of kickers. Alex Kessman and Matt Ammendola were the two kickers before the club signed Pineiro last December.

The Jets will hope they’re getting the Zuerlein who was a first-team All-Pro and Pro Bowler with the Los Angeles Rams in 2017, not the kicker who was inconsistent with the Dallas Cowboys in 2021, which led to the team releasing him in May.

In addition to Pineiro, the Jets also released safety Elijah Riley, offensive linemen Isaiah Williams and Caleb Benenoch and linebacker Kai Nacua as they had to trim their roster from 85 to 80 players before the 4 p.m. deadline.

The final set of roster cuts will be Aug. 30, two days after the last preseason game against the Giants, as all NFL teams will have to cut from 80 players down to 53.