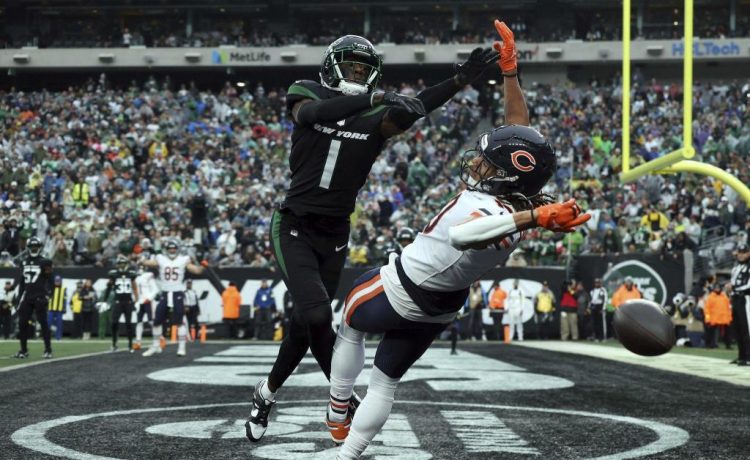 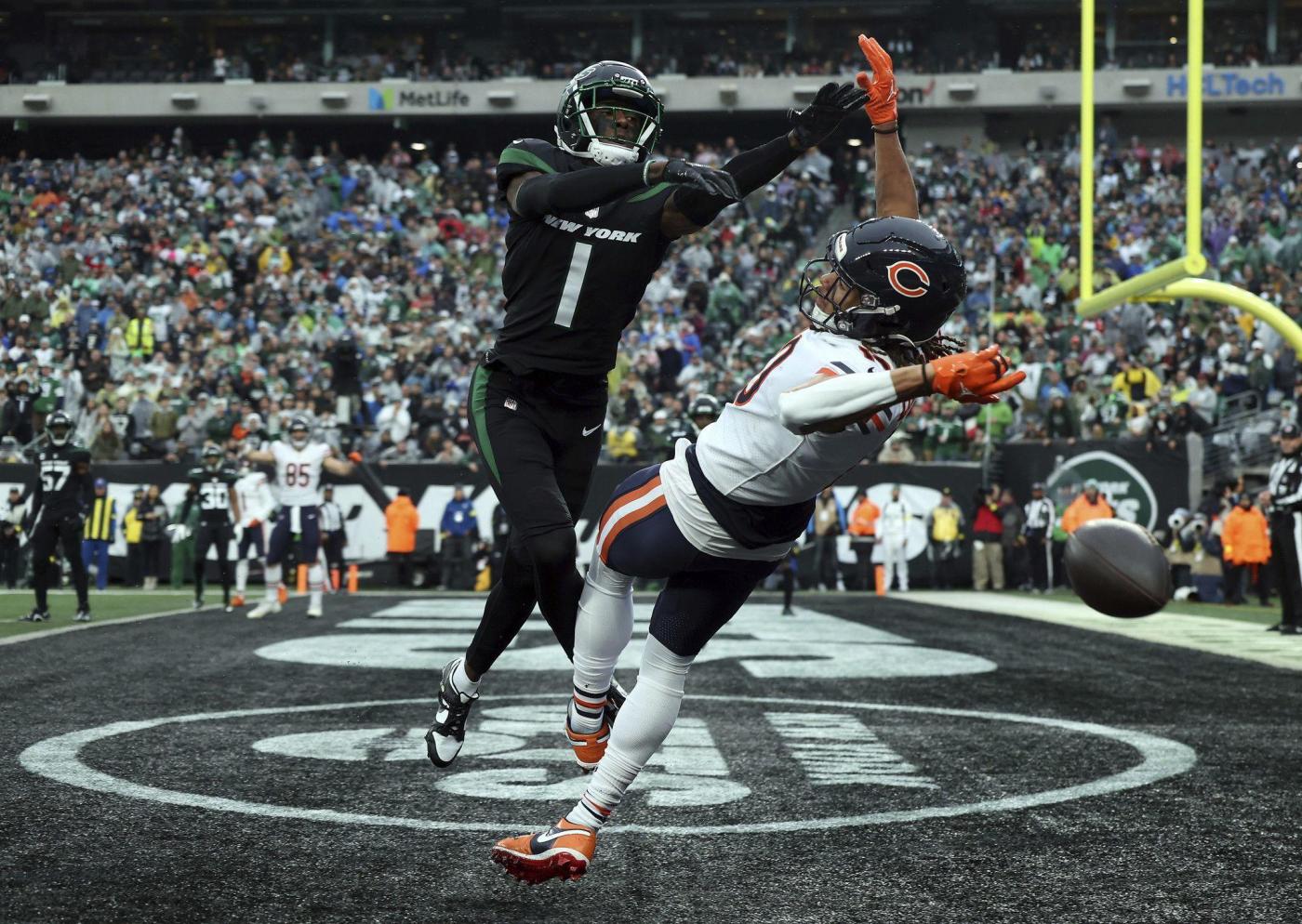 The Chicago Bears return from their bye week to one of their toughest tests of the season — a meeting with the 12-1 Philadelphia Eagles on Sunday at Soldier Field (noon, Fox-32).

In his third season, Hurts is among the favorites to win the NFL MVP award.

The 2020 second-round pick has completed 68% of his passes for 3,157 yards and 22 touchdowns and has thrown just three interceptions, good for a 108.4 passer rating. He also has rushed for 686 yards and 10 touchdowns.

“He’s really clear and concise on his reads and where he wants to go with the ball,” Bears coach Matt Eberflus said. “He doesn’t mess around with a lot of different, ‘Look here, look over there.’ He does a really good job of knowing where the coverage is telling him to put the ball. And he delivers it on time. He’s a very accurate passer. Throws a good deep ball. He’s really running that offense at a high rate. And the skill level that he’s got around him … they have good stock of receivers and the tight ends are good too.”

Hurts’ stats show he has made big strides this season while surrounded by a talented offense. But when Bears quarterback Justin Fields was asked about Hurts on Thursday, he started by talking about his intangibles, including “the way he carries himself.”

“Me and him are similar in our humility, and he’s a great leader, great person on and off the field,” Fields said. “And just how hard he works, blocking out the outside noise. Of course, being in Philly, that’s a city where they have passionate fans as well. So just hearing all of that and the stuff he had to go through in Year 1 and 2, where some people didn’t believe in him, and he just stayed down, believed in himself. And that’s really all you have to do. And just keep working, his work ethic. And you see what happened. He’s a great, great person, great leader for the team and great player.”

Can the Bears protect Justin Fields?

The Eagles defense leads the league with 49 sacks, setting the tone for the season in September when they sacked Washington Commanders quarterback Carson Wentz nine times. In the last two weeks against the Tennessee Titans and New York Giants, they recorded 13 sacks.

While the Bears’ team leader in sacks is safety Jaquan Brisker with three, the Eagles have five players with six or more, led by linebacker Haason Reddick’s 10. That pressure has helped force opposing quarterbacks into a league-leading 15 interceptions.

The Bears had their best passing performance of the season before the bye week in the loss to the Green Bay Packers, totaling 254 passing yards, and offensive coordinator Luke Getsy acknowledged better pass protection will be key to helping Fields unlock the passing game. But can they continue that against such a tough opponent?

“Being able to protect in the pass game is the most important thing that you need to do,” Getsy said. “You talk about developing a quarterback, the first thing you do is you go through pass protections before you even talk about a pass play. You’ve got to be able to protect the quarterback first.”

Fields needs 95 rushing yards to become just the third NFL quarterback to run for 1,000 yards in a season. Michael Vick did it in 2006 with the Atlanta Falcons, and Baltimore Ravens quarterback Lamar Jackson did it in 2019 and 2020.

Fields said it would be “crazy” to be in the same category as Vick.

“Me growing up in Atlanta, I remember I was 8, 9 years old, I had his cleats,” Fields said. “So that would just be crazy, kind of just full circle. It would be awesome. And Lamar, everybody knows he’s a great quarterback, a dynamic playmaker. Having my name with those two guys would be great for sure.”

Fields has twice rushed for more than 95 yards in a game this season — when he had 178 rushing yards against the Miami Dolphins and 147 against the Detroit Lions in back-to-back weeks in November.

“Within the first couple months of being around Justin, you saw the type of guy he was, the type of competitor he was, what kind of a teammate he is,” Getsy said. “He’s a fighter. He wants to win, and he’ll do whatever it takes to win. (Nearing 1,000 rushing yards) speaks to the type of teammate he is and what he’ll do for this organization more than anything else.

“Yes, he’s a phenomenal athlete. The things we’ve seen him do on the field have been awesome. They’ve been really cool to watch and be a part of. But for me, the bigger things are how do we grow him to be the leader that he wants to become and the player that he wants to become? All that stuff is based on the type of person that he is and the type of work ethic that he has.”

Bears defensive coordinator Alan Williams started his analysis of the Eagles by saying, “I am not quite sure that they have any weaknesses.”

“Usually you try to make a team play left-handed,” Williams said. “But they run the ball well, they have big plays in the passing game, they have three complete wide receivers, the quarterback is outstanding. Yeah, (they’re) the most complete team in the NFL, so we have our hands full.

Wide receiver A.J. Brown, in his first season since the Eagles acquired him from the Tennessee Titans, has helped Hurts’ development. Brown is on pace for a career season with 65 catches for 1,020 yards and 10 touchdowns. DeVonta Smith is second with 66 catches for 775 yards and five touchdowns. And the Eagles also have a 1,000-plus-yard rusher in Miles Sanders.

They are looking to get another target back soon too.

Tight end Dallas Goedert hasn’t played since Week 10 because of a shoulder injury. But he returned to practice this week and told Philadelphia reporters things were “trending in the right direction” for a potential return.

Goedert had 43 catches for 544 yards and three touchdowns in nine games before his injury.

The status of Bears wide receiver Chase Claypool is most notable after he missed Wednesday and Thursday practices with a right knee injury.

While Fields returned to practice Thursday after missing Wednesday with illness, running back David Montgomery sat out Thursday with an illness.

Players echoed the sentiment coach Matt Eberflus shared — they look at the game against the top team in the NFL right now as a great challenge. It’s only one game but will show how the Bears stack up against a team with few deficiencies. The Eagles have the top scoring offense in the league, which is a big problem for the defense. It means the Bears will need to control the ball on the ground and steal a possession or two along the way. What’s more likely: The Bears win or keep it close or the Eagles turn to backup QB Gardner Minshew in mop-up time? I’ll go with a Minshew appearance.

The Bears have lost six straight, and it could be argued that none of those opponents is in the same class as this Eagles team. Maybe the Dallas Cowboys — but the Bears lost by 20 to the Cowboys. So the biggest question for me is, can the Bears can keep it from being a blowout? And against an Eagles defense that leads the league in sacks and interceptions, can Justin Fields keep up with Jalen Hurts to make it a fun game, even if it’s not a close one? At this point, that’s what is worth watching for Bears fans.

This is a well-timed test for Justin Fields and the Bears offense to measure how much progress they have made. Unfortunately, the Eagles defense may be too talented, too deep and too opportunistic. And the Bears’ struggling defense will be overmatched against the league’s highest scoring team.