Todays Though > News > 5 things to watch in the Chicago Bears’ season finale vs. the Minnesota Vikings — plus our Week 18 predictions – Boston Herald
News

5 things to watch in the Chicago Bears’ season finale vs. the Minnesota Vikings — plus our Week 18 predictions – Boston Herald 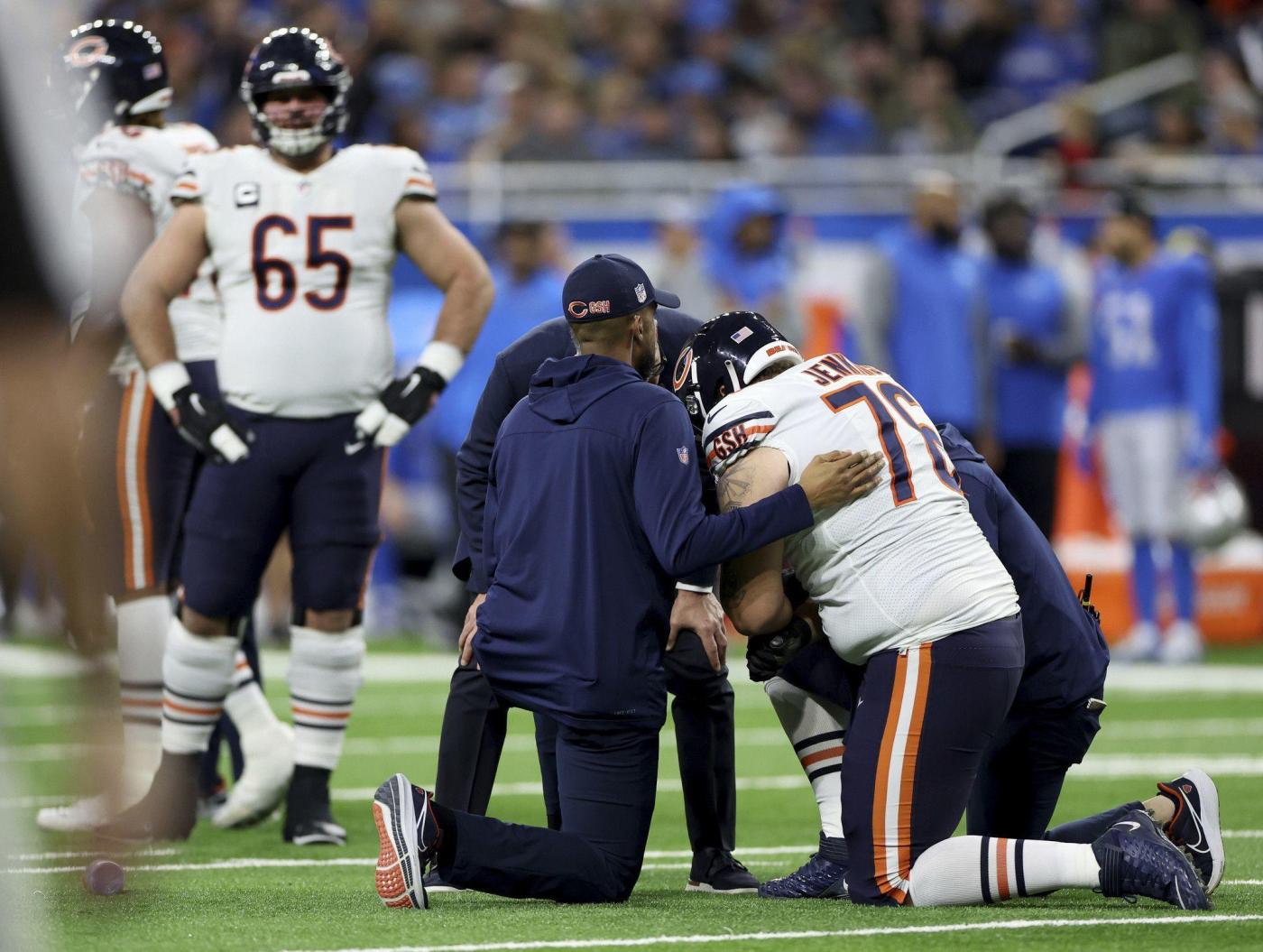 The Chicago Bears will host the Minnesota Vikings in the regular-season finale Sunday at Soldier Field.

The 12-4 Vikings clinched the NFC North on Dec. 17 but could seize the No. 2 seed in the NFC with a win and a San Francisco 49ers loss to the Arizona Cardinals. Meanwhile, the 3-13 Bears could avoid setting a team record for losses if they come out on top.

Where will the Bears pick in the first round of the 2023 draft?

Bears players are going to be focused on winning. But with Fields not playing, the focus for many fans will be how the Bears can land the highest draft pick possible.

If the Bears lose to the Vikings and the 2-13-1 Houston Texans beat the Indianapolis Colts, the Bears would get the No. 1 pick in the 2023 draft. If the Bears and Texans lose, the Texans will pick No. 1 and the Bears No. 2.

And if the Bears win, they could drop to No. 3 or 4, depending on whether the Cardinals or Denver Broncos — both 4-12 — lose.

The Vikings could help the Bears’ draft standing if they play their starters. Vikings coach Kevin O’Connell was asked early in the week whether he would sit starters such as quarterback Kirk Cousins or wide receiver Justin Jefferson or whether lineup changes would be more subtle than that coming off a 41-17 loss to the Green Bay Packers.

“It would probably be more subtle than that, just knowing the 2 seed is still available for us,” O’Connell said. “We still have a lot to play for, just from a momentum standpoint of a football team that has kind of had some highs this year for sure and then one of our low moments of the season (against the Packers), where you’d like to be able to rely on a lot of things we’ve built here to come back together and make sure we rectify some of the issues that contributed to (the Week 17 loss).”

In the teams’ Week 5 meeting, Cousins threw for 296 yards and Jefferson had 12 catches for 154 yards.

2. Player in the spotlight

Peterman didn’t know until Wednesday morning that he would be the Bears’ Week 18 starter, a bit of a surprise twist after coaches, front-office leaders and the team’s medical staff made a collective decision not to tempt fate by playing Justin Fields in a meaningless finale.

Fields, Matt Eberflus said, reported discomfort in his hip Monday morning, underwent an MRI and was diagnosed with a hip strain the team didn’t want to fool around with. So now Peterman will get his first start since 2018, when he was a second-year player with the Buffalo Bills. He went 31-for-49 for 188 yards with three interceptions in that game, which coincidentally was a 41-9 loss to the Bears.

Sunday will be his fifth career start.

“(I’m) extremely confident,” he said. “I’m excited. It’s been a little bit. (It’s) just be great to get out there with the guys and play some football and have some fun.”

Don’t be surprised, though, if Tim Boyle, who joined the Bears in Week 13, also sees time Sunday. That has been discussed.

For a hot minute in Week 12, Peterman looked like he would be the Bears’ emergency starter against the New York Jets after Trevor Siemian — filling in that day as Fields dealt with a separated left shoulder — suffered an oblique injury during pregame warmups. But after the team announced Siemian was out in the hour before kickoff, he pushed to play and found a way to gut through his pain in a 31-10 loss. The Bears placed Siemian on injured reserve three days later.

Peterman was asked this week about the chaos of that day in New Jersey.

“Crazy time,” he said. “I don’t really want to go into it too much. Yeah, a lot of crazy stuff that day.”

Instead, Peterman has turned his focus toward giving his best effort Sunday against the Vikings. He will be the 43rd quarterback to start a game for the Bears since they won Super Bowl XX.

The Bears wide receiver said the frustration he showed on the sideline Sunday during the Bears’ 41-10 loss to the Detroit Lions stemmed from not wanting to settle for such an ugly showing.

Claypool said he had “a good little back and forth” with Fields about how to handle such frustrations, which the wide receiver said came after the Bears went three-and-out on two straight drives.

Wide receivers coach Tyke Tolbert said he told Claypool that he loved the passion — “but channel it the right way.” Claypool hasn’t had an ideal start with the Bears since joining the team via trade in November. He has 12 catches for 111 yards and missed a couple of weeks with a right knee injury. So if he’s healthy and able to play Sunday, it’s a chance to head into the offseason on a positive note.

Buffalo Bills safety Damar Hamlin’s health continued to improve this week after he suffered cardiac arrest on the field during a “Monday Night Football” game against the Cincinnati Bengals.

Doctors from the University of Cincinnati Medical Center said Thursday that Hamlin was awake and responsive, was able to move his hands and feet and communicated with them and family members through writing. On Friday, his breathing tube was removed and he joined his Bills teammates on a video conference call, at the end of which he told them, “Love you, boys.”

Bears coaches and players have offered their well wishes and prayers to Hamlin all week while also processing their emotions of getting back on the football field after witnessing a traumatic reminder of the violence of the sport. Coaches have stressed that every player will handle that differently and offered mental health services for those who need them.

Tight end Cole Kmet said the Bears had their trainers walk them through all of the medical personnel who are on hand at a stadium on game days and the protocol they follow before a game to prepare for emergencies.

“If something were to happen, the one place you’d want to be is on a football field because you’ve got all these professionals there ready to help,” Kmet said. “That stuff makes you feel better about it and you’ve got a lot of people looking out for you.”

Kmet said he is praying for Hamlin but also said he will have to block out the emotions from the incident when he plays Sunday.

“Those are the things you think about in the offseason and really evaluate in the offseason,” Kmet said. “You can’t be going into a game on Sunday thinking about the things that may or may not happen to you on the football field. Obviously an unfortunate situation and we’re all praying for Damar. But guys have dealt with it in their own ways.”

Along with Fields sitting out, the Bears will be without guards Teven Jenkins (neck) and Michael Schofield (knee) and cornerback Josh Blackwell, all of whom they put on injured reserve this week.

I’m not sure if the Vikings will consider resting some key players with little chance they can gain the No. 2 seed, which would require a huge road upset by the Arizona Cardinals against the San Francisco 49ers. Injuries have crushed the Bears over the last five weeks. It’s a chance for more young players to show what they can do at the finish line.

The Vikings beat a full-strength Bears team by a touchdown in October, and now they will face a depleted Bears squad that is sitting another handful of players because of injury, including quarterback Justin Fields because of a hip strain. Vikings wide receiver Justin Jefferson had 154 receiving yards in the first game, and now, if Jefferson plays, the NFL’s top receiver could be going against a Bears secondary that is looking at playing third-stringers. The Bears players on the field — including backup quarterback Nathan Peterman — aren’t going to be thinking about how a loss would help the Bears’ first-round draft pick, but the circumstances set up well for it anyway.

For many Bears fans, this will be the perfect 10, the final stumble in a franchise-record 10-game losing streak that will give the team its 14th loss, something no squad in the previous 102 years of the franchise has experienced. If you’re not into the Nathan Peterman Show — or even a possible small dose of Tim Boyle — turn your attention to the game in Indianapolis, where a Houston Texans victory against the Colts could give the Bears the No. 1 pick in this spring’s draft.