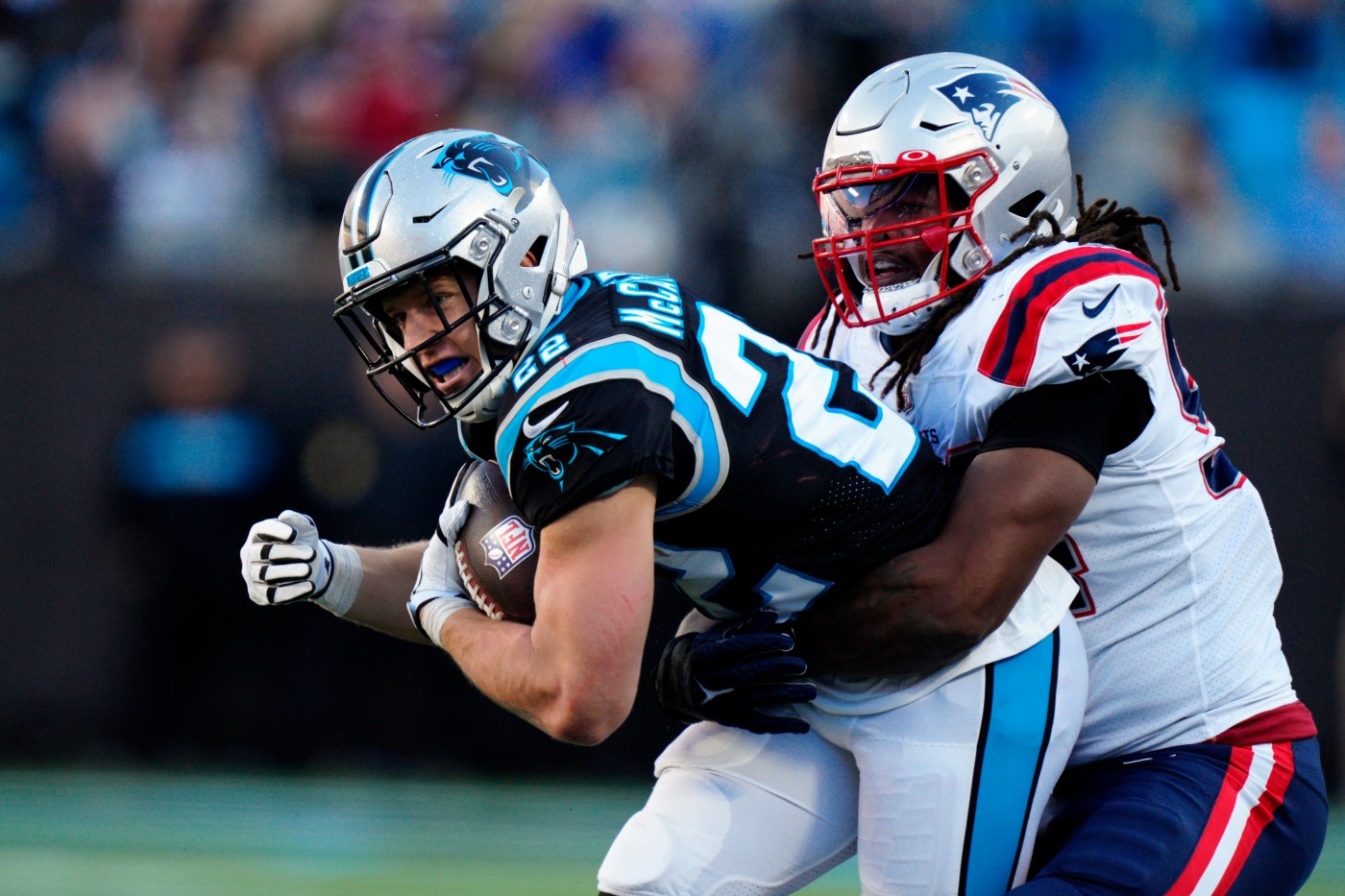 The fighting should be over.

The Patriots and Panthers will punctuate a fracas-filled week with a preseason game Friday night at Gillette Stadium. Three fights and several scrums broke out over their pair of joint practices Tuesday and Wednesday. What we know about Friday night’s game is Carolina intends to play its second and third-stringers, while it’s likely the Patriots’ starters see some more run after sitting out last week’s preseason opener.

Here’s what to watch for during the Foxboro edition of Friday night lights.

After Wednesday’s joint practice, Mac Jones smiled as he walked over to fulfill his weekly media obligation. And he had reason to, even after a so-so performance.

Because for the most part in team drills, he had time and space to throw, a world of difference from what his offensive line afforded him last week. Most of the pressure Jones felt during 11-on-11 periods and his two-minute drills versus Carolina was a function of having to hold the ball against tight coverage. The protection issues, which he hinted at by mentioning adjustments in his post-practice press conference, seem fixed.

The Panthers have serious rushers up from, including former high draft picks in Brian Burns, a Pro Bowler, Derrick Brown, a former seventh-round pick, and second-rounder Yetur Gross-Matos. If none of them play Friday, the Patriots should protect Jones well. If not, trouble is still brewing on the line of scrimmage.

2. Room in the running game

On Tuesday, Pats running back Damien Harris was asked whether he had enough room to run during team periods. He paused.

“Um, that’s a good question. You stumped me with that one,” Harris said. “I mean, again, it’s just about coming out here and executing. … We’ve got to get a hat on a hat in the running game, the guys with the ball in their hands, they’ve got take the right tracks, make the right reads, get the ball downhill. So it’s a work in progress.”

Harris had a right to be seemingly frustrated. Even on a day like Tuesday, when the Patriots called just five run plays during team drills, the running backs went nowhere. Wednesday brought more run stuffs and frustration. The outside zone scheme has been slow to take in training camp.

Granted, the Pats were down four offensive linemen this week, including starting right tackle Isaiah Wynn. But this can’t be a one-dimensional offense come Week 1. Friday will be telling.

Where is Kendrick Bourne?

It’s been a fair question as of late, with Bourne registering the fewest catches in team drills the past two weeks. The Patriots might fairly view him as the fifth-best receiver on the roster, with second-round rookie Tyquan Thornton steadily rising and DeVante Parker and Nelson Agholor enjoying productive camps around the ever steady Jakobi Meyers. Bourne isn’t at risk of reaching the chopping block, but his playing time could certainly take a hit.

How often Bourne reps with the starting offense will be our clearest look into where he stands relative to the others, especially Thornton and Agholor.

While unfortunate, Malcolm Butler’s placement on injured reserve this week — which ended his season — didn’t shake up the Patriots’ picture at cornerback.

Jalen Mills is firmly entrenched as the team’s top cover man, especially after shutting down perennial 1,000-yard receiver D.J. Moore in practice this week. Jonathan Jones has been repping as the starting corner opposite Mills for almost two weeks now. And inside, Marcus Jones has split nickelback duties with Myles Bryant, who offers some flexibility at safety.

This, it appears, is the Pats’ current rotation at corner. But if Jonathan Jones continues to surrender jump-ball catches as a 5-foot-9 perimeter corner or Terrance Mitchell forces another fumble like he did in last week’s preseason opener or Jack Jones remains sticky in man-to-man, might there be a shakeup?

The tiebreaker for many players vying for the final roster spots comes down to special teams impact.

The Patriots want the great majority of their players to impact at least two phases, playing offense or defense and then somewhere in the kicking game. Players like sixth-round rookie running back Kevin Harris or undrafted players Brenden Schooler and DaMarcus Mitchell have been regulars on the starting special teams units so far in camp. All of them could be fairly viewed as sitting squarely on the roster bubble, with Schooler seemingly closest to locking down a spot on the 53-man roster.

Why? He’s seen by far the most special teams snaps in camp. So if a player is starting on multiple special teams in Friday’s first half, consider it an excellent sign for his chances of doing the same in Week 1.