Todays Though > News > 6 takeaways from the Chicago Bulls’ 114-107 win over the Utah Jazz, including Lauri Markkanen’s fiery shooting vs. his old team – Boston Herald
News

6 takeaways from the Chicago Bulls’ 114-107 win over the Utah Jazz, including Lauri Markkanen’s fiery shooting vs. his old team – Boston Herald 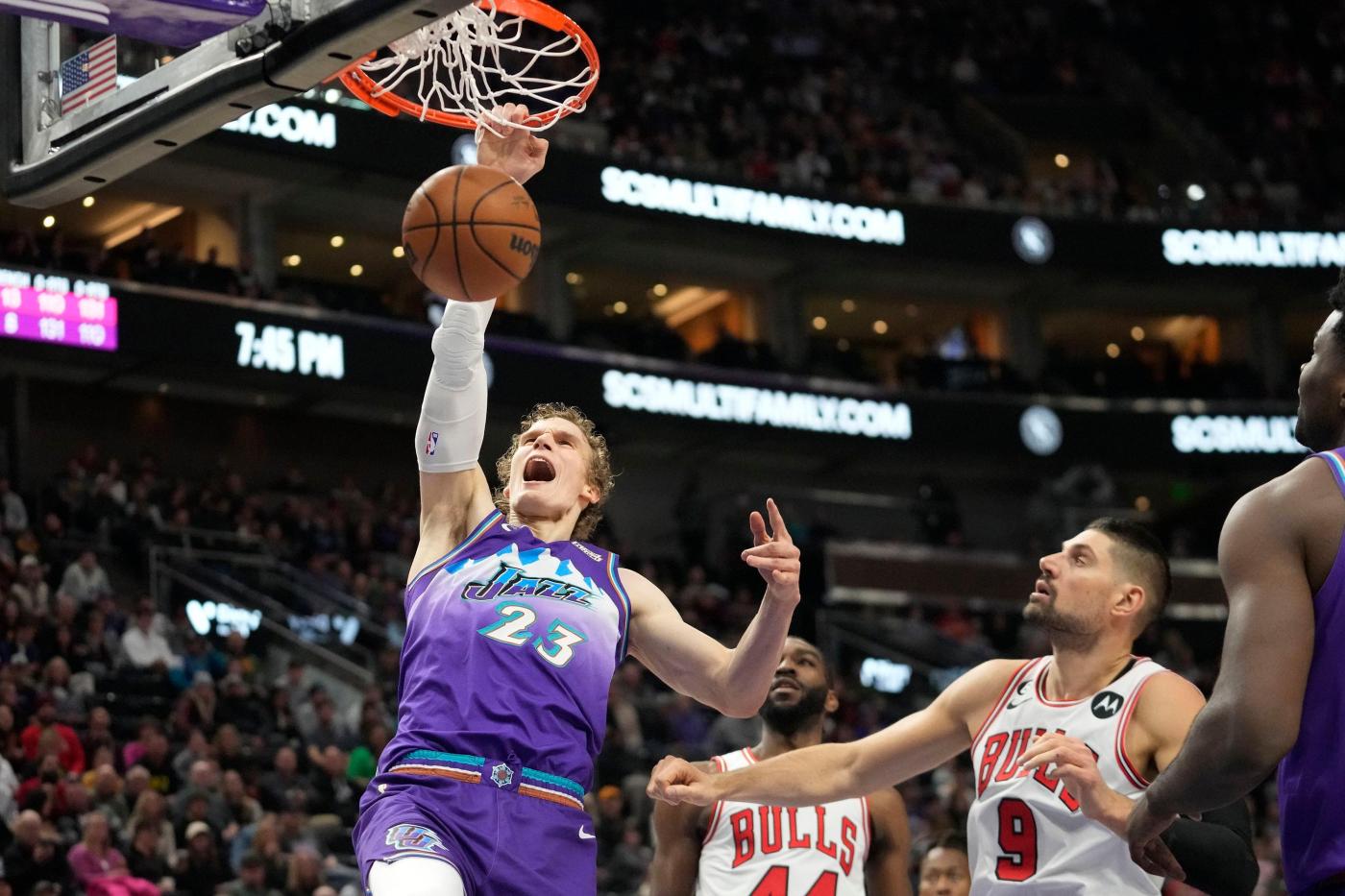 The Chicago Bulls tallied their second win in a six-game road stretch with a 114-107 victory over the Utah Jazz on Monday night.

The Bulls improved to 9-11, retaining their 11th spot in the Eastern Conference with the win. The team will continue on to Phoenix to face the Suns on Wednesday night in the fourth game of the West Coast trip.

Here are six takeaways from the game.

1. After clutch game losses, the Bulls figured it out in the second close win of the trip.

The Bulls are beginning to reverse their fortune in close games with their second clutch win in the last week. Heading into this six-game road trip, the Bulls were 0-7 in clutch game situations, which are defined as games with a five-point margin with five minutes remaining.

After winning a clutch game in Milwaukee last Wednesday then losing in overtime to the Oklahoma City Thunder on Friday, the Bulls clinched a decisive victory after the Jazz cut the margin to 102-99 with 5:26 remaining.

The Bulls succeeded by not allowing the win to rest on the decision of the final play. Five different players scored in clutch time, and the Bulls forced two turnovers and four offensive rebounds in the final five minutes of play.

One-time Bulls forward Lauri Markkanen gave his former team a taste of what they might be missing, scoring 32 points for the Jazz.

The Bulls acquired Markkanen as part of the draft-night trade in 2017 that brought Zach LaVine from the Minnesota Timberwolves. Markkanen went No. 7 overall in the draft, setting high expectations for Bulls fans who hoped the lanky young forward would usher in a new era.

But that dream never came to fruition. Markkanen butted heads with former coach Jim Boylen while struggling to fit into the offense, averaging 13.6 points per game in his final season with the Bulls before requesting a trade in 2021. Although his initial time with the Cleveland Cavaliers repeated familiar struggles, Markkanen has flourished after his trade to Utah, where he averages 22.2 points per game.

Markkanen scored the first eight points for the Jazz, missing only one shot in the first half to score 24 points on 5-for-6 shooting from behind the arc. He cooled off in the second half, scoring only two fourth-quarter points.

3. Bulls roared back in the third quarter after a slow start in the opening half.

The Bulls erased a 10-point deficit at halftime with a dominant third quarter led by 12 points from DeMar DeRozan. The team went on a 14-6 run to take an 80-76 lead, finishing the quarter with an 86-80 margin. The Bulls shot 55% from the field during the quarter, forcing four turnovers to disrupt the Jazz offense.

The comeback was bolstered by the containment of Markkanen, who went 2-for-5 from the field in the third after dropping five 3-pointers in the first half.

“He was a recipient of a lot of catch-and-shoot threes,” Bulls coach Billy Donovan said. “We didn’t get out there hard enough. There were some drives where our rotations were slow. He didn’t have to necessarily do a lot, to be honest with you. We did a better job of cleaning up in the second half.”

4. Utah turnovers provided opportunities for the Bulls to capitalize offensively.

The Bulls continue to define themselves through disruptive defense. The Jazz coughed up the ball 14 times and the Bulls capitalized on those errors, scoring 23 points off turnovers.

The fourth quarter opened with three straight turnovers by the Jazz which resulted in six points for the Bulls. The series reflected the importance of perimeter defense for the Bulls, who kept the Jazz from targeting stars like Markkanen or Kelly Olynyk by pouncing on passes.

Creating offense through turnovers opens up the floor for this Bulls team, allowing them to make larger teams like the Jazz uncomfortable through coast-to-coast drives. Continuing this trend will be a key, especially during a long road trip to face three more West Coast teams.

Andre Drummond came off the bench for the most efficient performance of the night, tallying 10 points, 10 rebounds and a steal in 14:26 total minutes on the court. Drummond continues to be an explosive addition for the Bulls, including running the court to Euro step around a defender for a rare big-man transition bucket in the fourth quarter.

Drummond led the Bulls bench in outscoring the Jazz bench 39-18 as the secondary unit continued to cement wins. Coby White added 15 points off the bench and closed the game with another dagger 3-pointer. Goran Dragić added seven points, including his first 3-pointer since injuring his neck against the Boston Celtics.

6. Despite the win, the Bulls’ lack of 3-point shooting is still concerning.

The 3-point line remains a weak point for the Bulls, who were outshot 19-6 from behind the arc in the loss. The Jazz shot at a 38.8% clip from 3-point range, scorching the Bulls who continue to be one of the bottom-5 defenses of the 3-point line. The Bulls are allowing opponents an average of 37.5% efficiency on 3-pointers while attempting a league-low 29.1 shots per game from behind the arc.

While the Bulls can dominate games through turnover points and midrange shooting, their lack of a 3-point offense raises serious questions in a league dominated by long-range shooting.