Todays Though > News > 6 takeaways from the Chicago Bulls’ 150-126 loss, including a scoring mark that hadn’t been reached in regulation since the 1980s
News

6 takeaways from the Chicago Bulls’ 150-126 loss, including a scoring mark that hadn’t been reached in regulation since the 1980s 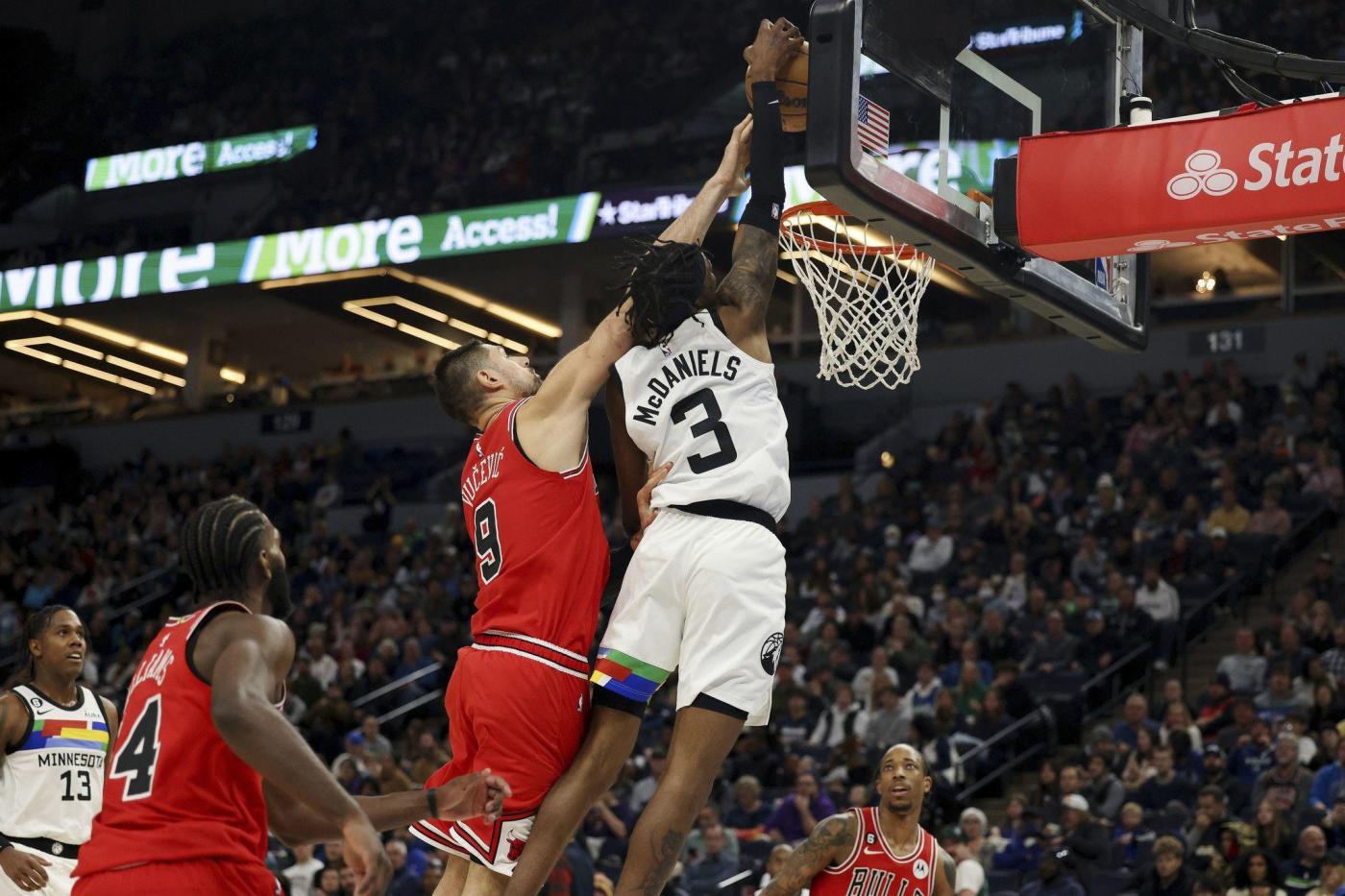 The Chicago Bulls collapsed Sunday in a 150-126 loss to the Minnesota Timberwolves, their fourth straight defeat.

The loss dropped the Bulls to 11-18 and they remained in 11th place in the Eastern Conference.

Here are six takeaways from the loss.

1. The Timberwolves scored 150 points, the most the Bulls have allowed this season — and the most in regulation since the early 1980s.

The Bulls hadn’t given up 150 points in regulation since a 152-144 loss to the Detroit Pistons in 1982. The Timberwolves tally was the sixth-highest the Bulls have allowed in franchise history, including a pair of four-overtime games.

The game started with a high-scoring bent on both sides, with the Bulls leading 34-32 after one quarter. But the Timberwolves exploded in the middle two quarters, scoring 39 points in the second and 42 in the third.

Anthony Edwards led the Timberwolves with 37 points and 11 assists, and D’Angelo Russell went 6 of 7 from 3-point range in the first half and 7 of 10 for the game to finish with 28 points as the Bulls allowed a season-high 23 3-pointers. The Timberwolves shot 65.5% from the field and 53.5% from 3-point range, scorching the Bulls at every point on the court to set a franchise scoring record.

2. A clear lack of communication left the Bulls floundering on both ends of the court.

Judging by the energy on the court, this was a new low point for the Bulls. By the end of the game, the Timberwolves — a 15-15 team that was trounced in blowouts on a West Coast trip just last week — were gleefully dancing.

The Bulls defense has become increasingly out of sync throughout this skid, failing to communicate during mismatches and switches. Coach Billy Donovan attempted to switch to a zone defense to quell the scoring, but the issue wasn’t the scheme — it was a severe lack of defensive rigor.

“I can switch to zone, I can switch to different pick-and-roll coverages,” Donovan said after the loss. “But if the compete level is not high enough collectively, it doesn’t make a difference.”

3. The Big Three provided the bulk of the offense.

On paper, it looks as if the Bulls’ Big Three — Zach LaVine, DeMar DeRozan and Nikola Vučević — recorded a strong night of offense despite the loss. All three finished with at least 20 points: DeRozan scored 29 points, Vučević 23 and LaVine 22.

But this is becoming a relatively meaningless statistic for the Bulls, who are consistently losing games despite 20-plus-point performances from their three stars.

4. The turnover count improved, but the Timberwolves still made them count.

In addition to poor shooting and tepid defense, the Bulls have been struggling with ball protection throughout their skid. That seemed to improve against the Timberwolves — the Bulls had only 11 turnovers, nearly halving their total against the New York Knicks (20) earlier in the week.

This was a welcome change, except that the Timberwolves still capitalized on those mistakes, scoring 20 points off turnovers. Transition defense has been a lowlight for the Bulls all season, particularly at the 3-point line. A buzzer-beating 3 off a steal by Edwards to close the third quarter accentuated this continued weakness.

The Bulls were short-handed once again Sunday as Green sat out with right knee soreness, which has kept him out of the regular rotation for two weeks after his one-game stint as a starter. But despite the loss of rim protection and size, Donovan did not play veteran center Andre Drummond at all.

6. The Bulls are facing another challenging road trip.

This is only the beginning for the Bulls, who play three more games on the road before returning home for their end-of-the-year slate. After going 1-4 on their West Coast trip at the start of December, the Bulls are back on the road to face the Miami Heat, Atlanta Hawks and Knicks.

The Bulls will have to break their four-game losing streak on the road — or else slip further in the East.