Todays Though > News > 6 things we learned from the Chicago Bulls preseason, including Ayo Dosunmu earning the starting PG role and Dalen Terry pushing for minutes
News

6 things we learned from the Chicago Bulls preseason, including Ayo Dosunmu earning the starting PG role and Dalen Terry pushing for minutes 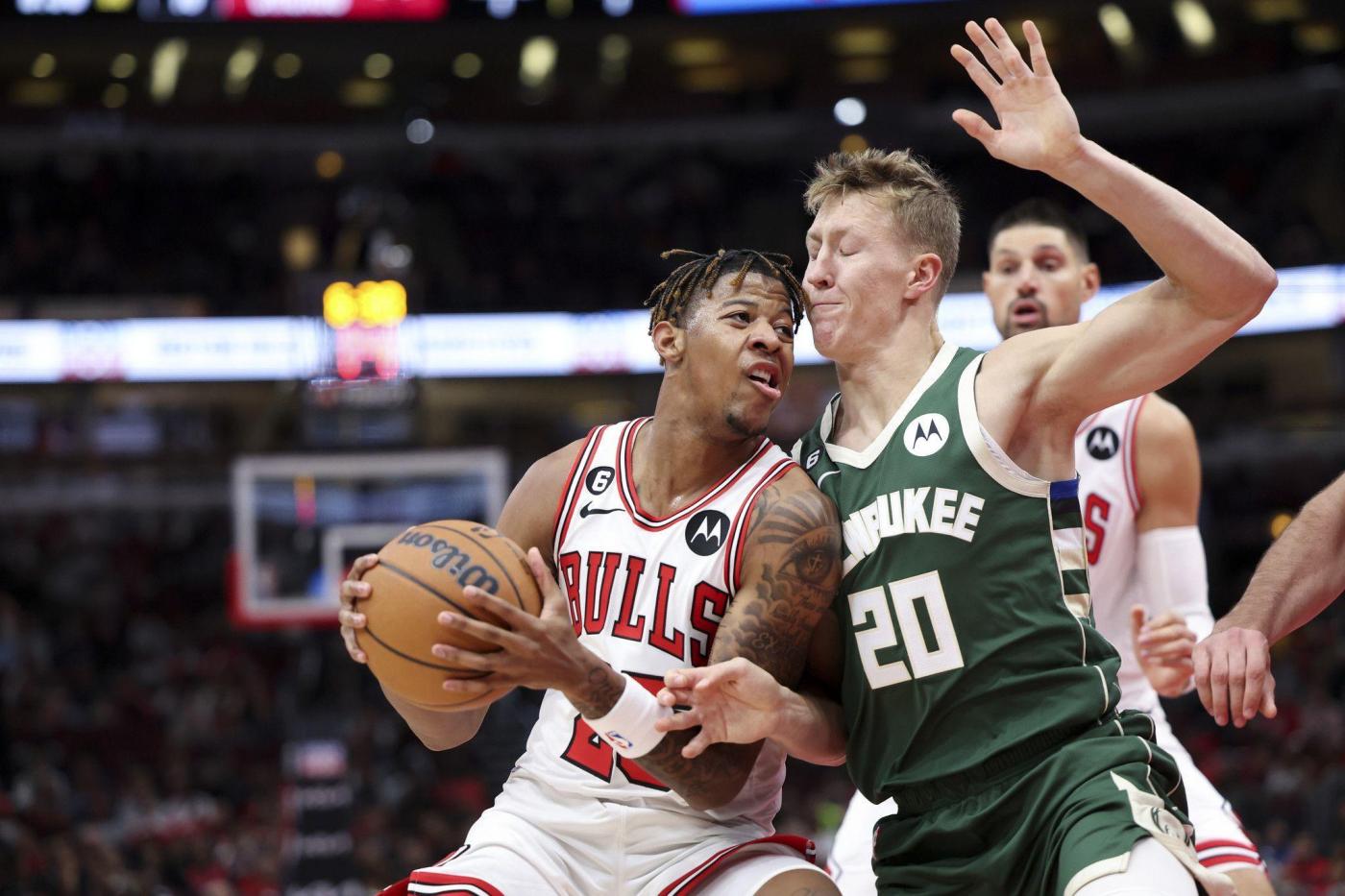 The Chicago Bulls capped a 3-1 preseason Tuesday, playing four games that offered a glimpse at the regular season.

Preseason results always need to be consumed with a grain of salt: Billy Donovan started a different lineup in every game, and key opponents such as Giannis Antetokounmpo and Nikola Jokić didn’t play.

But the preseason still offered a look at what’s working — and what isn’t — for the Bulls. Here are six things we learned from the preseason.

Dosunmu, 22, is set to fill in for Lonzo Ball until the point guard returns from a lingering left knee injury. Dosunmu averaged 10.3 points, 3.3 rebounds and 2.8 assists in preseason, going 6-for-11 on 3-pointers.

While Dosunmu was reliable at the position last season, he struggled with the physical and mental rookie wall in the final month. His main tasks will be improving confidence in making on-ball decisions and sustaining his pace through the season.

The preseason only threw more doubt about the role of the third-year power forward, who continues to struggle asserting himself.

Javonte Green made a strong bid to usurp Williams’ position in the starting lineup after stepping in at power forward last season. Green brings a different skill set to the position, but his ability to guard larger players and crush dunks in transition and in the paint stands out against Williams’ timidity.

Williams, 21, used the final preseason game to show that he can match Green’s rim aggression, throwing down three thunderous dunks. But he hasn’t been able to muster the same energy when factored in to the starting lineup with DeMar DeRozan and Zach LaVine.

3. Zach LaVine is healthy — but not himself

The layoff was visible in LaVine’s comfort throughout the preseason. Although he looked more confident than he did in the final half of last season, LaVine’s decision making with the ball lacked its typical precision. He turned the ball over 10 times while registering only nine assists in three games before sitting out the final preseason game.

This likely was a result of needing to sweep away cobwebs with a few scrimmages, but LaVine’s passing will be a key component for the Bulls offense — especially without Ball. The quicker LaVine can regain comfort, the better the Bulls will be for it.

The center didn’t share the same discomfort as LaVine in the preseason, playing all four games and voicing his confidence in his fitness. Vučević struggled last season when the Bulls became overly reliant on his corner 3-point shooting. The preseason showed the Bulls are eager to work Vučević into the post for more opportunities with his back to the basket.

Vučević made seven 3-pointers on 50% shooting and fared just as well in the paint, where he shot 68% in averaging 14.8 points and 9.5 rebounds. The increased activity in the paint also set up the center to connect with LaVine and Dosunmu in the two-man game and facilitate more effective ball movement from side to side.

Failing to find the right role for Vučević was a key detractor last season. If the Bulls have found an effective groove, the center could take a step up.

Donovan entered the preseason prepared for Terry to take a slow entry into the NBA. But after showing out in the preseason, the 20-year-old rookie has proved he’s ready to push for as many minutes as possible.

Terry’s work on his shooting over the summer was evident — he averaged 6.5 points on 55% shooting — but he especially excelled in assisting teammates and pushing a faster pace in transition. He didn’t appear to miss a beat against the elevated speed and skill of the NBA, particularly on the defensive end.

Although he likely will remain a deep rotational player, Terry did enough in the preseason to earn minutes with the first team much sooner.

6. The Bulls still can push the pace without Lonzo Ball

One of the biggest questions for the Bulls to start the season is how to maintain a fast pace in transition without Ball, who typically supplied the team with highlight-worthy, full-court passes to spark breakaways.

But the Bulls showcased an ability to supplement this pace even without Ball. Alex Caruso and Goran Dragić are capable guards in transition, and Terry added to the fast pace as well. But even bigs such as Vučević and Andre Drummond were actively pushing the pace in the final three preseason games.

If the Bulls can sustain this, they’ll be better fit to replicate the up-tempo offense that served them well at the start of last season.