Todays Though > News > 7 takeaways from the Chicago Bulls’ 120-102 win over the Boston Celtics, including the 19-point comeback and Nikola Vučević’s size advantage
News

7 takeaways from the Chicago Bulls’ 120-102 win over the Boston Celtics, including the 19-point comeback and Nikola Vučević’s size advantage 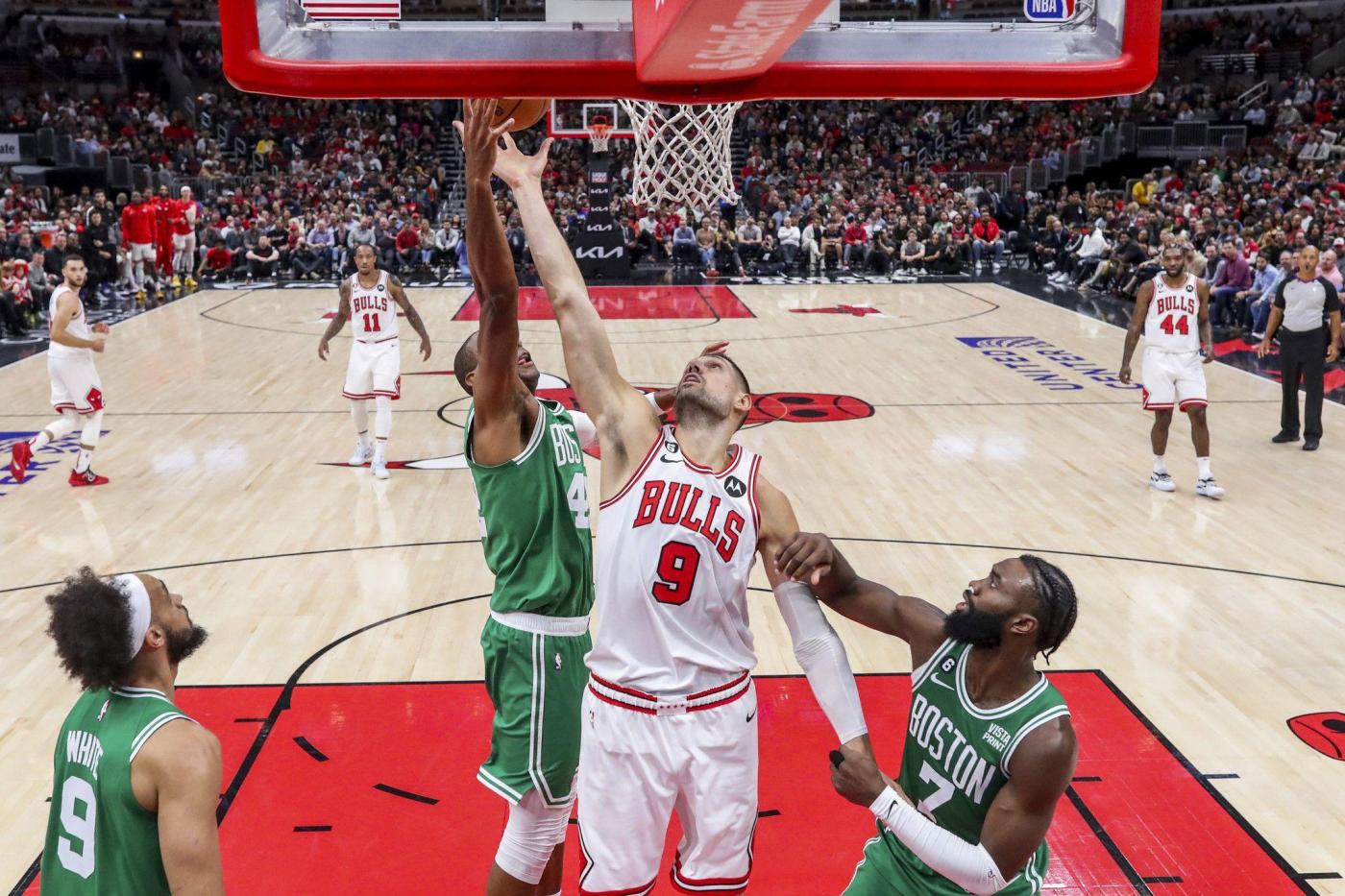 The Chicago Bulls recorded their first home win of the season Monday, blowing out the Boston Celtics in a 120-102 victory at the United Center.

Despite falling into a deep deficit in the first half, the Bulls were able to flip the script on the reigning Eastern Conference champions to level out their record at 2-2.

Here are seven things we learned from the win.

The Bulls seemed out of the fight early in the first half when the Celtics sprang ahead to a 19-point lead. But that lead didn’t last for long, as the Bulls dug into their depth to climb out.

Coach Billy Donovan criticized the secondary unit for slipping into a hole Saturday against the Cleveland Cavaliers, who took control during a long stretch between the first and second quarters without any starters on the court.

But the bench unit brought a different energy against the Celtics, aided by improved rotations that kept either Zach LaVine or DeMar DeRozan on the court to lead the secondary rotation. Backup guard Goran Dragić sank a left-handed layup to finally punch the Bulls ahead 46-44 in the second quarter.

The Bulls ultimately finished with an 18-point lead, completing a 37-point swing to blow out the Celtics.

2. Derrick Jones Jr. stands out off the bench.

Jones came off the bench to lead the secondary unit, providing the necessary spark to fuel the first-half comeback. He scored all 10 of his points in the first half, throwing down a pair of dunks that galvanized the Bulls through their 19-point surge.

Jones hasn’t always factored into the Bulls rotation as the third-string power forward, but he helped to fill the gap created by another stagnant night from Patrick Williams.

“Every moment I’m on the floor I cherish it,” Jones said. “We just played as hard as we could. Once we got the lead, we didn’t look back.”

This significant drop in shooting efficiency stemmed from the Bulls’ defensive effort, which elevated pressure around the perimeter. The Bulls have struggled against strong 3-pointing teams throughout this season. As the second-lowest 3-point shooting team in the league, this improvement in defending long-range shots will be a necessity for the Bulls to keep pace with opponents.

Vučević finished with 18 points and 23 rebounds on his 32nd birthday, leading the Bulls on both sides of the court against the small lineups of the Celtics. The Bulls exploited their size advantage against the Celtics, whose proclivity to switch on screens left Vučević paired up against smaller players like Jaylen Brown.

By maintaining movement and prioritizing touches in the paint, the Bulls were able to outscore the Celtics in both points in the paint (46) and second-chance points (16). Andre Drummond added 12 rebounds as the Bulls commanded the boards.

Dosunmu notched his strongest performance in his second season after a pair of lackluster games, in which he scored five points against the Cavaliers and seven points against the Wizards in the Bulls’ two losses. Dosunmu finished with 22 points and two assists, finishing 4-for-4 from 3-point range.

Consistency is the next step for Dosunmu, whose importance continues to grow for the Bulls as the stand-in starting point guard.

The Celtics pushed back against refereeing throughout the night, resulting in two ejections.

Interim head coach Joe Mazzulla drew a pair of consecutive technical fouls in the first half after beseeching a referee to review a foul by Vučević. Assistant coach Damon Stoudamire coached the remainder of the game in his place.

Grant Williams was also ejected with a pair of technical fouls in the fourth quarter after bumping into an official as the forward lunged to his feet after a foul.

With Monday’s win, the Bulls have already achieved two victories over teams expected to rank in the top four of the Eastern Conference — the Celtics and the Miami Heat. Those two wins match their record from last season, when they went 2-21 against the top competitors in the East.

It’s too early in the season to stake any claims on what these two wins could mean for the broader picture in the East. But this ability to compete with the best in the conference is a much-needed improvement from last season, when the Bulls consistently folded against the best in the league.