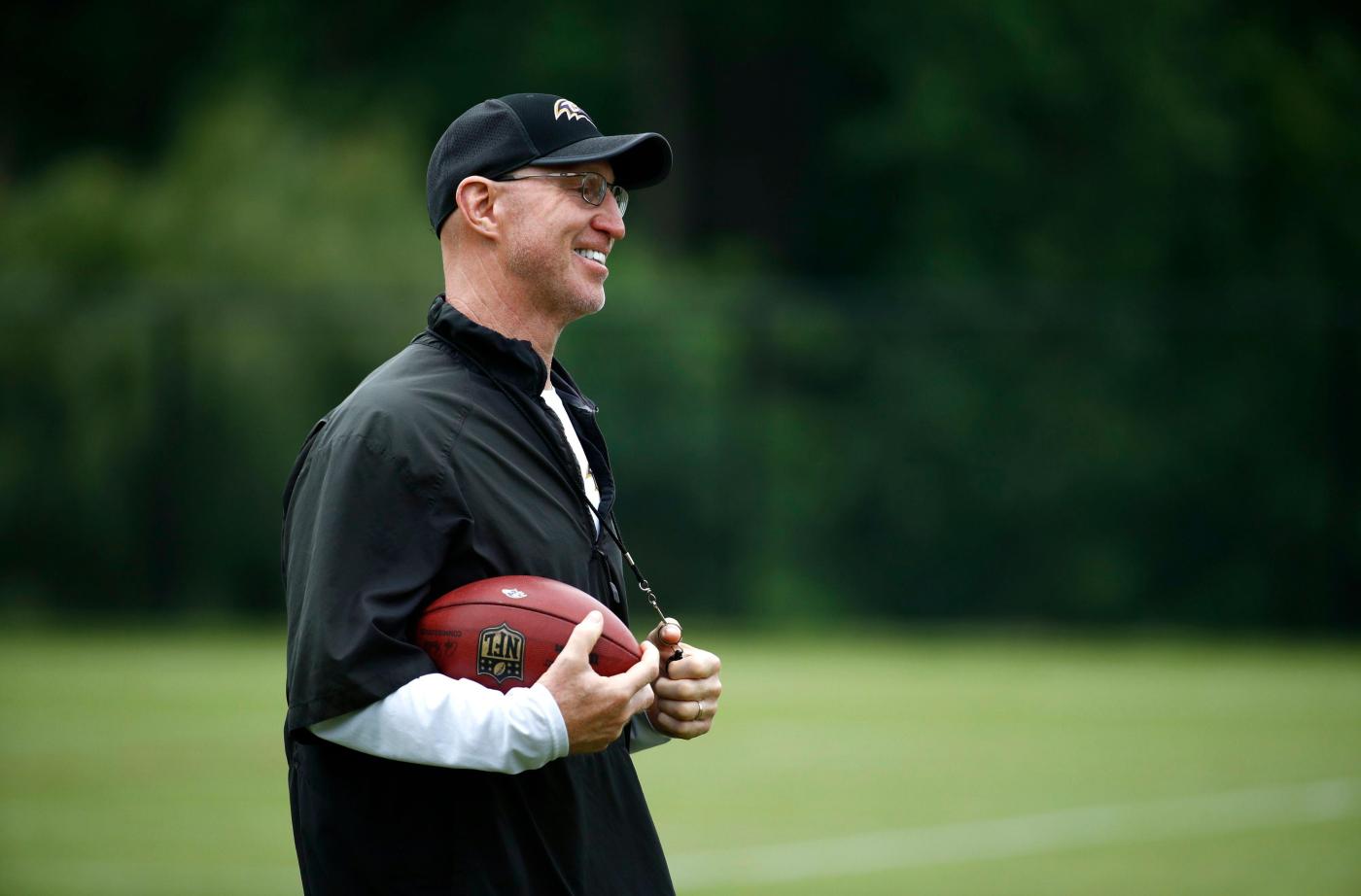 A crushing road loss to the Jacksonville Jaguars ended the Ravens’ four-game winning streak. Sunday’s game in Baltimore offers a prime opportunity to start over.

The Denver Broncos (3-8) have lost three straight games and seven of their past eight overall. Since trading away star outside linebacker Bradley Chubb on Nov. 1, Denver has graded out as the NFL’s worst team, according to Football Outsiders’ efficiency metrics, with a 29th-ranked offense, 27th-ranked defense and 32nd-ranked special teams.

1. Jackson has struggled with his downfield passing all season. In Sunday’s loss to the Jaguars, though, there were hints of a potential turnaround.

Jackson went 3-for-7 on attempts of at least 20 air yards, according to TruMedia, including a 62-yard bomb to wide receiver DeSean Jackson. The fourth-quarter throw traveled 63.2 yards in the air, according to the NFL’s Next Gen Stats, the longest completion of Jackson’s career.

Through 11 games, Jackson is 12-for-41 (29.3%) on deep passes, 30th in accuracy among 38 qualifying quarterbacks. His off-target percentage (43.9%) on passes of at least 20 air yards is third worst, according to TruMedia, behind only the New York Jets’ Zach Wilson and Atlanta Falcons’ Marcus Mariota.

That inaccuracy has seemingly emboldened some defenses to drop a safety into the box in hopes of stifling the Ravens’ ground game. When they’ve struggled to run against heavy boxes, passing woes have often followed.

“You’re always constantly setting the hook,” Roman said Thursday. “The better you can run it, the better you should be able to throw it, the better looks you should get. That’s part of it. That’s part and parcel. … I look at certain play-action things we do [as] just extensions of the run game, [and] the run game is an extension of them; they all fit together. When they work in concert, you have a chance to be really good.”

Denver has allowed just 12 completions on 34 deep passes this season (35.3% accuracy), according to TruMedia, but five have gone for touchdowns. None have been intercepted.

Over the last four games, however, a stretch coinciding with top wide receiver Rashod Bateman’s absence because of a season-ending Lisfranc (foot) injury, Duvernay’s efficiency has cratered. Despite a relatively higher volume of passing plays, he has just 62 receiving yards in that span. Duvernay’s 0.54 yards per route run would’ve finished outside of the top 200 among wide receivers last season, according to PFF.

Broncos cornerback Patrick Surtain II, one of the game’s brightest young stars, won’t cede many big-play opportunities Sunday. But the 2021 first-round pick is coming off maybe the two worst games of his season. Surtain allowed a combined eight catches on 11 targets for 183 yards and three touchdowns over the past two games, including Las Vegas Raiders wide receiver Davante Adams’ overtime, game-winning 35-yard touchdown in Week 11.

3. Think the Ravens have had bad luck at wide receiver? Consider Denver’s misfortune this season.

Former Raven Tim Patrick, who’d combined for nearly 1,500 yards over the past two seasons and signed a three-year, $34.5 million contract extension in November, tore his ACL in early August.

Jerry Jeudy, a 2020 first-round pick who struggled over his first two years in Denver, had a solid season (449 yards) interrupted by a Week 10 ankle injury. He was limited in practice Friday and is questionable for Sunday’s game.

KJ Hamler, a 2020 second-round pick, played in a combined 16 games over his first two seasons because of hamstring and knee injuries. This year, he’s been limited to seven games, in which he has seven catches for 165 yards and no touchdowns. After a setback in his recovery from a torn hamstring, Hamler won’t play in Baltimore.

4. The Broncos had little success through the air against the Ravens last season, with quarterbacks Teddy Bridgewater and Drew Lock combining for 4.8 yards per attempt in their Week 4 home loss. The silver lining for Denver’s offense was its ground game, which averaged 6.2 yards per carry and outgained the Ravens 106-102.

This year, with rising star Javonte Williams having suffered a season-ending knee injury in October and the recently released Melvin Gordon struggling (3.5 yards per carry), the Broncos’ rushing attack has been far from threatening. Denver’s No. 26 in efficiency, according to Football Outsiders, averaging just 4.1 yards per carry.

Former Ravens running back Latavius Murray, now the top option in Denver’s backfield, won’t have an easy afternoon against a defense that’s allowed just 2.5 yards per carry since Week 9. With another shutdown day, the Ravens could set a modern-era NFL record for the most consecutive games in which a defense has held an opponent to fewer than 50 rushing yards (five).

5. There might not be a bigger mismatch in the NFL this season than the Ravens’ special teams against Denver’s special teams.

The Ravens have generated 26.01 expected points added on special teams, according to TruMedia, the fourth most in the NFL. The Broncos have generated minus-34.17 EPA, the second worst. (EPA accounts for situational factors such as down, distance and field position.)

The Ravens rank first in the NFL in overall special teams efficiency, according to Football Outsiders’ metrics. The Broncos rank last.

6. When Denver hired former Ravens special teams coordinator Jerry Rosburg as a senior assistant in late September, it wasn’t to have him help the Broncos’ special teams. There was a more pressing need: game operations.

First-year Broncos head coach Nathaniel Hackett’s clock management and communication issues had drawn heavy criticism over the team’s first two weeks. So, on the recommendation of general manager George Paton, he reached out to Rosburg, 67, who’d retired in March 2019 after over a decade in Baltimore.

Rosburg visited Denver for team meetings and joined Hackett’s staff to help with game-day decisions ahead of their Week 3 matchup with the San Francisco 49ers. Rosburg’s wisdom hasn’t kept the Broncos completely out of late-game trouble — more clock mismanagement hurt them in the overtime loss to the Raiders — but Hackett said Wednesday that he’d been “nothing but unbelievable.”

“I felt like I needed a little more assistance with the different game management aspects of just how we managed everything,” Hackett said in a conference call with Baltimore reporters. He praised “his experience, his understanding, his communication skills, his ability to present to the guys. And he’s with me on the phones at all times, continually working to help me and guide me and put me through different situations during the week — and then, at the same time, help guide me during the game.”