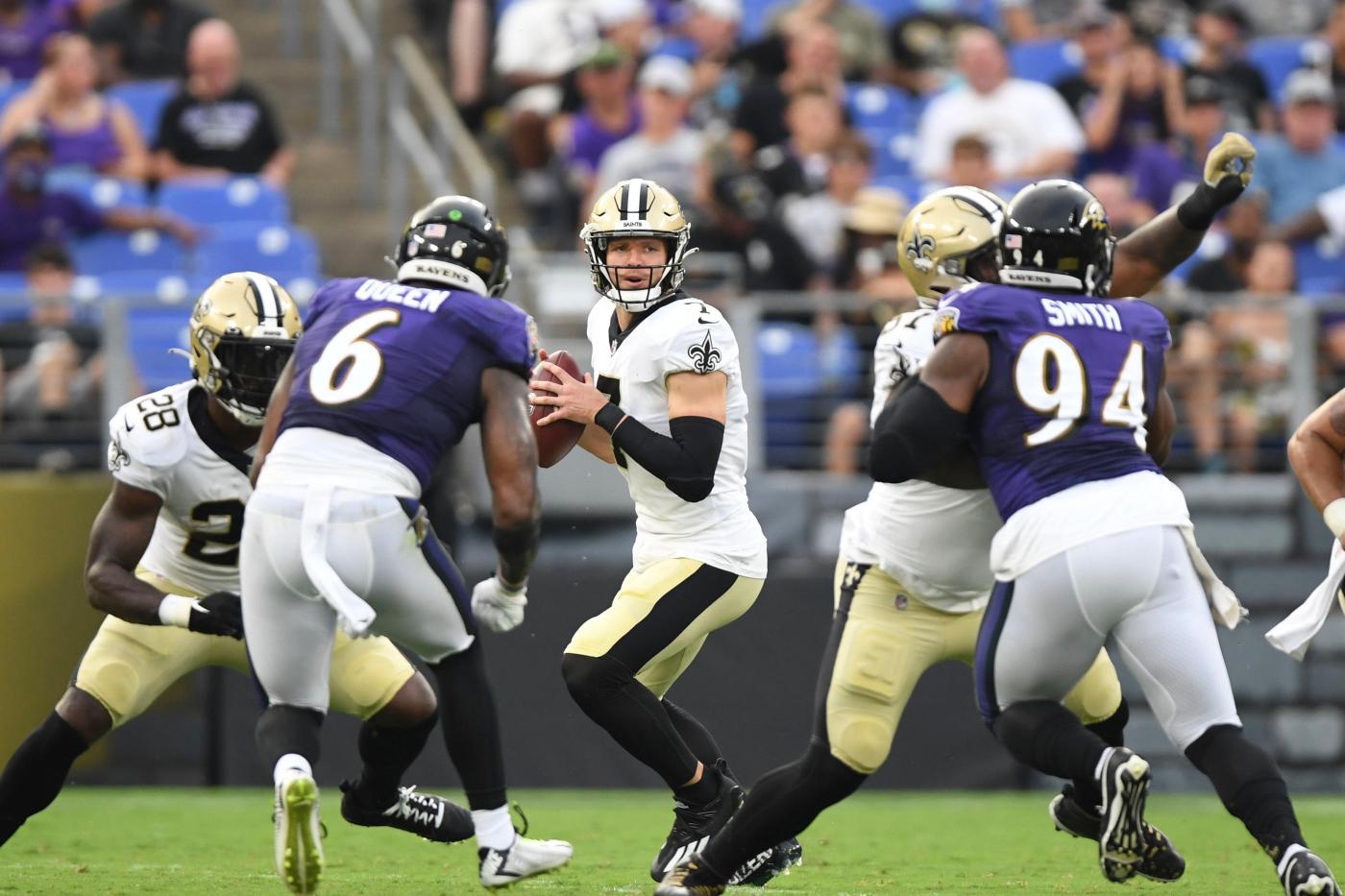 The Ravens packed a lot of news into their longest layoff of the season.

They gained a star inside linebacker in Roquan Smith on Monday, then confirmed they’d lost a potential star wide receiver in Rashod Bateman three days later. They activated outside linebackers Tyus Bowser and David Ojabo on Tuesday, but practiced without tight end Mark Andrews and running back Gus Edwards on Thursday, a week after both left an impressive win over the Tampa Bay Buccaneers.

With a third straight victory Monday night over the New Orleans Saints (3-5), the Ravens (5-3) could head into their bye week feeling good about their playoff chances. With a loss inside the Caesars Superdome, they’d have to stew over their season’s misfortunes and missed opportunities for longer than they’d like. Here’s what to watch in the teams’ Week 7 matchup.

It was a fairly typical game plan from the Saints’ defense, one of the NFL’s least aggressive units. According to Pro Football Reference, New Orleans ranks No. 29 in the NFL in blitz rate, sending five or more pass rushers on just 15.2% of opponents’ drop-backs. The Saints also have one of the NFL’s lowest pressure rates (17.2%, 26th overall).

They might not change things up against Ravens quarterback Lamar Jackson. Against four or fewer pass rushers this season, he’s completing 64.4% of his passes but averaging just 6.4 yards per attempt and taking a sack on 8% of his drop-backs, according to Sports Info Solutions. He’s also thrown six touchdowns and four interceptions on 146 attempts.

With the All-Pro Andrews sidelined at practice this week, the fourth-round pick is in line to make his first career start Monday. Likely earned a game ball after catching six of his seven targets for 77 yards and his first career touchdown in the Ravens’ win over Tampa Bay. Awaiting him in New Orleans is a Saints defense, led in the middle by All-Pro inside linebacker Demario Davis, that’s first in the NFL in pass defense efficiency against tight ends, according to Football Outsiders.

“There’s a lot about this NFL game that rookies have to learn on the fly,” offensive coordinator Greg Roman said Friday. “As a tight end in this offense, you have to learn a lot. He’s doing a nice job with that, but someone goes down, someone has to step up. That’s the name of this game, so he did a great job with that, and we look forward to working with him and him developing moving forward.”

3. Since Week 3, the Ravens have averaged 6 yards per carry on third and fourth down and converted those runs into first downs 64.5% of the time, according to TruMedia.

The Saints, meanwhile, have allowed just 3.2 yards per carry on third- and fourth-down runs this season, the fourth-best mark in the NFL. Only 30.8% of those attempts have been converted into first downs, by far the league’s best rate. In its loss to New Orleans last Sunday, the Raiders attempted just one run on third and fourth down — a third-and-1 end-around to wide receiver Davante Adams that lost a yard.

4. Over his nine seasons with the Cincinnati Bengals and one-year cameos with the Dallas Cowboys and Chicago Bears, quarterback Andy Dalton is a respectable 8-10 against the Ravens despite substandard play. His passer rating (78.3), completion percentage (.568), yards per attempt (6.8) and touchdown-to-interception ratio (1.3) in those 18 meetings are all lower than his career averages.

In his first season with New Orleans, where he’s replaced Jameis Winston, the 35-year-old Dalton is now enjoying a late-career resurgence. His QBR (55.0) would be his highest over a season since 2018, and he’s finished with a completion percentage better than his current mark (.652) just once in his career.

“He’s capable in so many ways,” Ravens coach John Harbaugh, who’ll face Dalton for the fourth time in as many years Monday, said Thursday. “We’ve played him so many times; we’ve seen him on tape so much. We understand his game, and we understand how he can win for an offense. So our job is going to be to do everything we can to take those things away from their offense. That’s a challenge, because they have a lot of good players around him, but we have all the respect in the world for Andy Dalton. He’s made a big difference in their offense; they’re playing good offense, and he’s done a good job.”

5. If facing Lamar Jackson every day in practice has prepared the Ravens’ defense for anything, it’s a run threat like Taysom Hill.

The Saints’ gadget player, technically a tight end, has 39 carries for 337 yards (8.6 per attempt) and five touchdowns this season. Designed quarterback runs account for most of his production: According to SIS, he has 18 such carries for 210 yards and three scores this season, with 145 yards coming after contact.

Hill’s been especially dangerous on third down, with five designed quarterback runs for 124 yards and a touchdown. He had a 60-yard score on third-and-1 against the Seattle Seahawks and a 57-yard run on third-and-1 against the Atlanta Falcons. Both came on “QB power” plays, in which Hill takes a shotgun snap in a heavy formation and follows a pulling lineman into the second level.

“The key to stopping them is, you have to play really sound defense, and everyone has to do their job in a very physical way,” Harbaugh said Thursday. “It’s the same thing you talk about with our offense; it adds an extra blocker to the equation, and he can throw. So we have to just do a great job against that offense. We run a lot of those plays, too. So we’re practicing hard against it. It’s not just that; he’s a very good runner, he’s very physical, he’s a very smart player, a very tough player. All those things come into account.”

6. Saints running back Alvin Kamara specializes in outside-zone run concepts, in which offensive linemen move in unison toward one side of the field, responsible for blocking zones on the field, rather than specific defenders. From there, it’s up to the running backs. As they read the defense, looking for a crease, they can either “bend” back to the weak side of the play, “bang” into an open rushing lane or “bounce” the run outside the tackle.

According to SIS, Kamara has more outside-zone carries (29) than any other kind of run this season, averaging 4.9 yards per attempt and scoring three touchdowns. Against the Raiders, he had seven such carries for 31 yards, including a 3-yard touchdown to open the scoring.

The Ravens should be well prepared. Their defense has allowed just 2.8 yards per carry on 18 outside-zone runs this season, bolstered by solid production at all three levels, from defensive lineman Justin Madubuike to inside linebacker Patrick Queen to safety Chuck Clark.

Smith, acquired Monday, is expected to play, too. “We’ll see how much,” defensive coordinator Mike Macdonald said Friday, praising the All-Pro’s grasp of the defense, “but he’ll be out there.”

7. The Ravens are tied for second in the NFL in turnover differential (plus-six) and have forced a turnover in 10 consecutive games, a streak that dates to the end of last season. The Saints are last in turnover differential this season (minus-nine); they’ve forced just seven turnovers (two interceptions, five fumbles) and have committed 16 themselves (nine interceptions, seven fumbles).

8. Jackson needs 14 rushing yards to pass Steve Young for fifth place in career rushing yards by a quarterback. Young finished his Pro Football Hall of Fame career with 4,239 yards in 169 games. Jackson has 4,226 yards in 66 games.

With a punt return touchdown, Devin Duvernay would become the first player in modern NFL history to record a touchdown on a fumble recovery, kickoff return, punt return, catch and carry. The Saints have one of the NFL’s worst special teams units and rank No. 28 in punt efficiency, according to Football Outsiders.