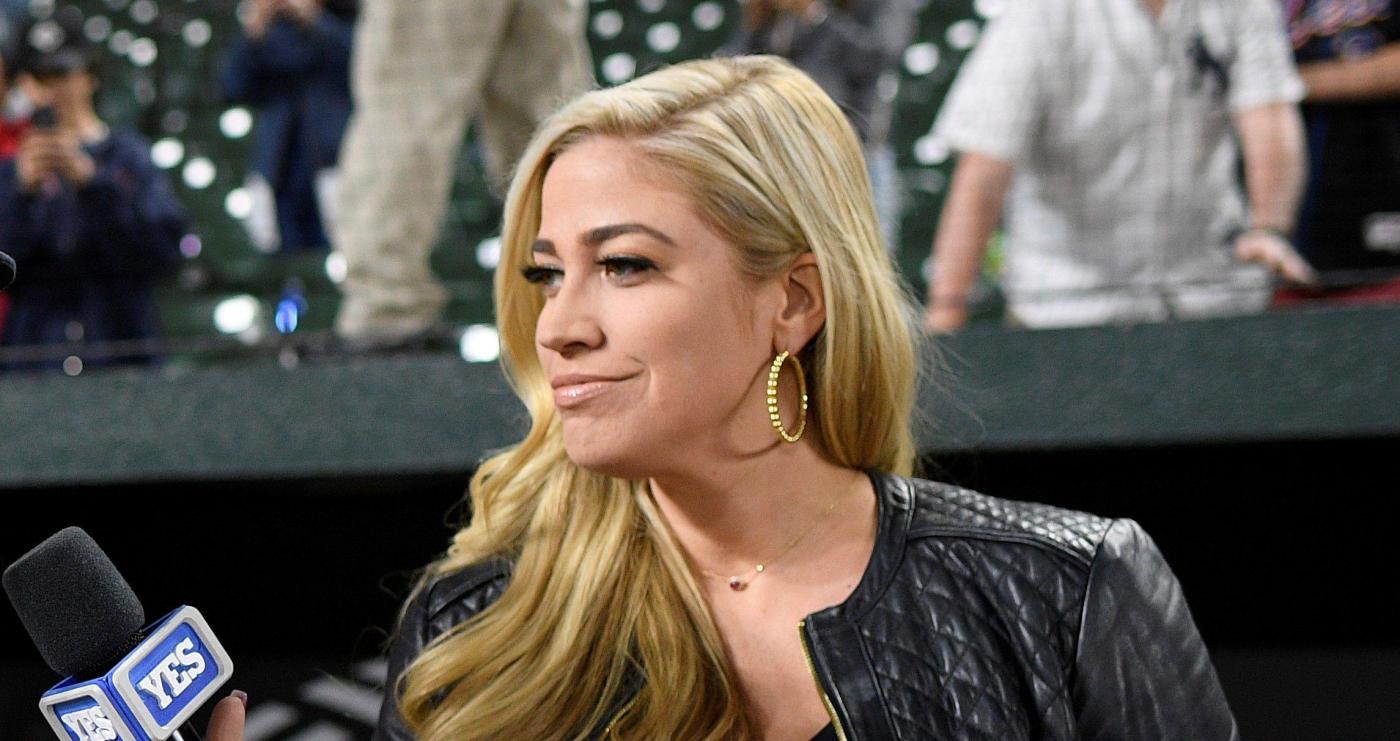 And with that, the YES Network commences another Yankees telecast.

As Michael Kay starts the show and introduces one of his many broadcast sidekicks, one person has already been hard at work, though not yet seen.

Meredith Marakovits has already done her open on the game and will offer insight, injury reports with knowledgeable banter with Kay (and sidekick) from the booth, leading up to the post-game report.

Not a bad gig for the former LaSalle University grad and D-1 volleyball player.

“I played three years, but not my senior year. I was injured, but they let me keep my scholarship,” states Marakovits. “My parents appreciated that.”

She’s been the pre- and post-game reporter since Opening Day, March 2012. Piece of cake, right?

“My actual first day on the job and Mariano Rivera blew a save,” she remembers with a chuckle. “Oh man, I have to go up to the greatest closer of all time and I’m the first one to ask a question. ‘Hi, my name’s Meredith, by the way, about that blown save?’”

Awkward moments aside, Marakovits has seen some historic moments up close as well.

How about watching Aaron Judge’s first Bronx Bomber home run or Derek Jeter and Andy Pettitte coming out to take the ball from Rivera for the last time?

“You get to see a lot of cool moments,” she points out. “That’s my favorite part of the job.

“I did the last interview on the field when Derek played his final game at Yankee Stadium,” says the beaming Marakovits, “and I had a front-row seat.”

Her job has its ups and downs, but you can’t let it eat you up.

“There was a little bit of a learning curve in how YES does things and what they expected of me,” she recalls, “but I don’t ever remember a time of feeling uncomfortable.

“You almost have to have a closer’s mentality. Shake it off and have a short memory.”

Marakovits has been around for someone still in their late thirties. The advantage for her was she was already working in the New York market.

“I had worked for SNY. I had worked for ESPN Radio and the FAN, so I wasn’t a complete stranger to these guys, the team and the way people did business here,” she states. She has also covered minor league baseball.

Oddly, the Marakovits household wasn’t big on baseball. It was basketball and the 76ers.

“When I became the Sixers’ sideline reporter,” she recalls, “that was insane.”

That was a team of Andre Iguodala and Doug Collins was the coach.

And that was before “The Process.”

“Which hasn’t really worked,” she points out.

What has worked for Marakovits is being part of a talented line of succession.

When Suzyn Waldman moved from the Yankee clubhouse reporter to radio color analyst, she was replaced by Kim Jones who held the spot from 2005 to 2012. Marakovits has been there ever since as has Waldman, one of her closest friends.

“I feel like I can’t call her mother. She would kill me,” says Marakovits. “She’s one of my best friends and advocate. I don’t she think she gets nearly the amount of credit she deserves for being a pioneer in this business. It’s the honest to God truth.”

Because of Waldman, Marakovits’ job isn’t as taxing.

“I don’t have to deal with some of the things she had to deal with early on because of people like her,” she notes. “I don’t think enough women in the business recognize that or appreciate that.”

The job of a Yankee TV reporter isn’t all sit back and kibbitz. There is a process even in baseball.

“I get to a home [night] game at 2:15,” she says, describing the start of her workday. “I look over my notes for the game, do my hair and makeup. The clubhouse opens at three. That’s the window when I can start grabbing Yankee players.

“From three to four the clubhouse will be open. [Manager Aaron] Boone will talk at four. Afterwards, if I need to go the opposing clubhouse, I’ll pop over there. Taking BP (batting practice), you never know who’s going to be floating around. I talk to my producer, decide what we’re doing for the pre-game show and then kind of go from there.”

All you young reporters, got it? But wait, there’s more!

“Pregame will be 6:30, do a segment for the beginning of the game. The game starts and I’m hoping to get in and talk to the guys,” she says.

The game ends and she’s back to work.

“We’re somewhat lucky this year in the sense that we’ve had some games that are three hours,” she says. “Post-game is usually 55 minutes or more. Probably done after 11.”

Then there are the quick turnaround days.

“People don’t realize the grind and what these athletes go through throughout the course of the season,” she says. “We just have to broadcast it and they have to go out there and play nine.

“I can think of four times this year that we got in at five, six a.m. and then there’s a game.”

She ain’t complaining, because she’s on the front lines as the Yankees try for world title number 28.

“I haven’t covered a World Series and I’m really hoping this is the year,” she says.

Being so close to the Yankees makes her the fan’s eyes and ears.

“I feel Aaron Judge has made himself more of a spokesman over the years,” she declares.

And she’s seen changes in the styles of the managers she’s covered – Joe Girardi and Aaron Boone.

“Any manager of the New York Yankees is going to be a little bit guarded,” she states, “but Boone appears to be a bit more relaxed than Joe.”

Even Covid-19 couldn’t slow her down.

Marakovits was well prepared for when the pandemic hit. She set up her home in Clearwater, FL to do interviews and You Tube stuff. Her home became a studio with all the tricks of the trade.

“Can’t tell you the amount of ring-light links I’ve sent to people,” she says with a laugh. “I was one of the most prepared people for working from home doing TV during the pandemic.”

And while she deals with many types from the Yankees to YES brass, she has a supporter in the main man of the telecast – Michael Kay.

“Michael has been fantastic to me,” she admits. “Met Michael for the first time in 2009 covering the Phillies for an ESPN radio affiliate at Citizens Bank Park. We crossed paths a couple of times before I got this job, and he has always been good to me.

Marakovits loves the job, but is there more to accomplish?

“YES has been good to me and I enjoy my current role,” she acknowledges, “but I always think there’s room for growth.

“What that looks like is still to be determined.”