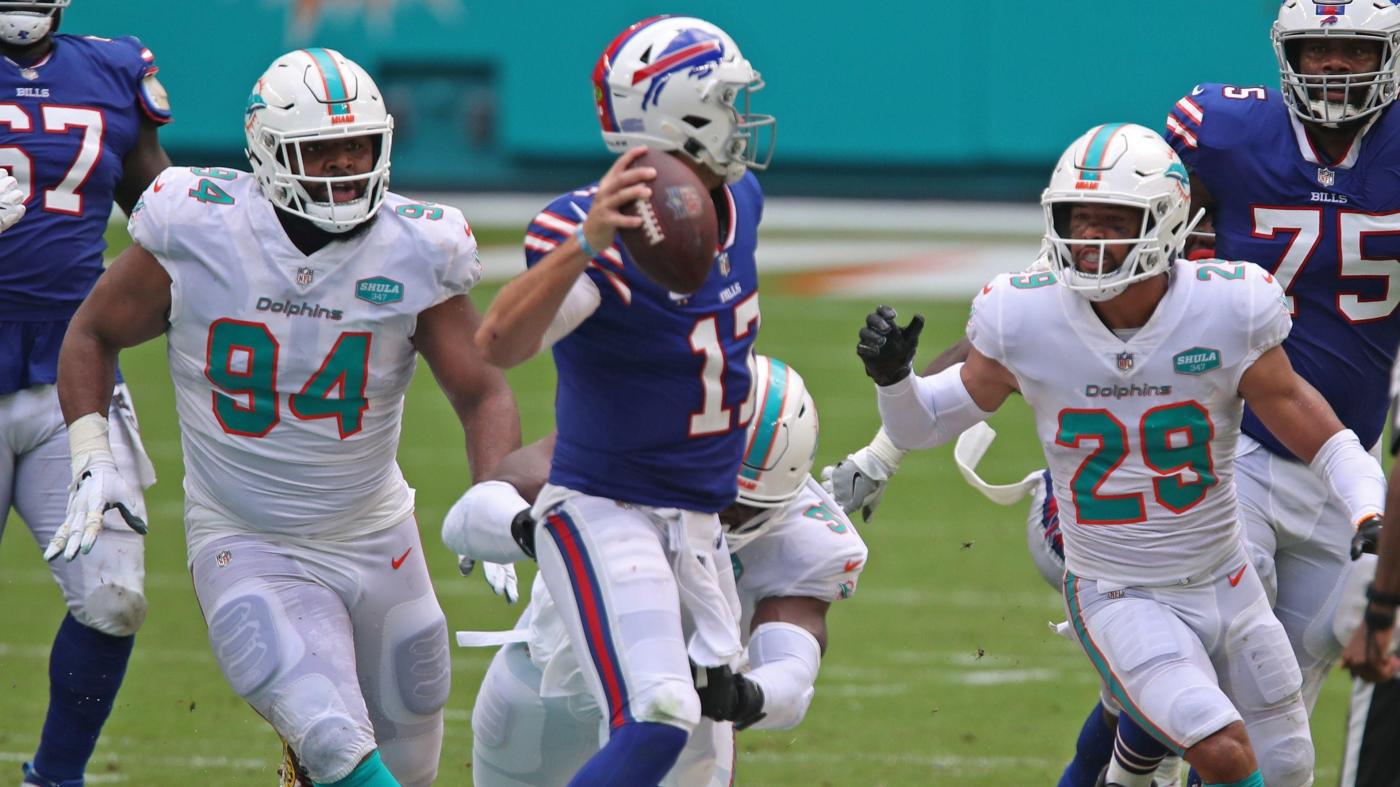 There’s no need to oversell this. There’s no need to pretty up the Miami Dolphins’ next game with dramatic words or historical themes like how it would be their biggest regular-season victory since clinching their last AFC East title at the New York Jets on the last day of the 2008 season.

That year was an oasis in the larger two decades of swill, too.

You could say this is bigger, too, because beating Buffalo on Sunday wouldn’t represent an overachievement like that 2008 season was. It would unlock the imagination in a manner Dolphins fans haven’t been allowed to do for football generations.

But, again, with the realization there’s no need to hype Sunday’s game between the 2-0 Dolphins and the 2-0, two-time defending AFC East champion Buffalo Bills, here’s what’s at stake: If the Dolphins win, you can consider them a contender.

Let’s pause to think of that.

When’s the last time you could imagine the Dolphins as a contender? Don’t say when they squeaked into the playoffs in 2016 or the aforementioned 2008 season. Making the playoffs were those ceilings — and false ones, as the following years proved.

Don’t say the last time you imagined the Dolphins as a contender was when Sports Illustrated picked them as a Super Bowl team in coach Nick Saban’s second year in 2006. That was blather. That season drove Saban to Alabama.

Coach Jimmy Johnson had an aging Dan Marino and the league’s best defense in 1998. But even Johnson didn’t think they were a top-end contender.

That’s three decades ago. Buffalo has lost four Super Bowls, gone a couple decades without the playoffs and rebuilt itself into the AFC East’s gold standard since then. The Dolphins? They’ve wandered through the desert the past 20 years.

Now comes a defining game in the third week. Sure, it’s early. It’s still September. But it’s not too early to push the Dolphins into the conversation of contenders if they win this.

Should the Dolphins be favored? They have some things going for them. They’re at home in the September heat. They won with suffocating defense against New England and with electric offense at Baltimore. Buffalo is on a short week, too, after dismantling Tennessee on Monday night 41-7.

But there’s no chance the Dolphins should be favored to win this game. That’s not just because they’ve lost seven straight to Buffalo. It’s because Buffalo is the best team in the NFL through two weeks. The Bills beat the defending Super Bowl champions in the Los Angeles Rams and the defending No. 1 seed in the AFC by a combined 72-17.

You also can love quarterback Tua Tagovailoa’s coming-out party in the fourth quarter against Baltimore, if it’s looked back as that someday. But Buffalo has Josh Allen. He makes Buffalo a contender as long as he plays there, like Marino once did for the Dolphins.

There have been times over the past couple of decades the Dolphins-Bills rivalry lacked juice – and not just, “The Juice,” of O.J. Simpson. That was bitter stuff. The 1972 Dolphins stood across the line and cursed the Bills running back because his team trailed three touchdowns and kept running him to pad his stats.

“You chickens—,’ Dolphins linebacker Nick Buoniconti told him. “Look at the scoreboard.”

There have been other times over the past two decades this rivalry lacked consequence, primarily because New England won 17 AFC East titles in 19 years and everyone else was playing for a participation trophy.

There also have been times there’s been in-the-moment drama, like when games at Buffalo knocked Joe Philbin’s 2012 Dolphins out of the playoffs and 2020 knocked Brian Flores’ Dolphins out. But no one pretended the Dolphins were built to contend those year.

Win this one and the landscape changes. Losing doesn’t mean either team is out of anything. Buffalo is a great team already. The Dolphins, with a win, will prove they can be in that conversation, too.