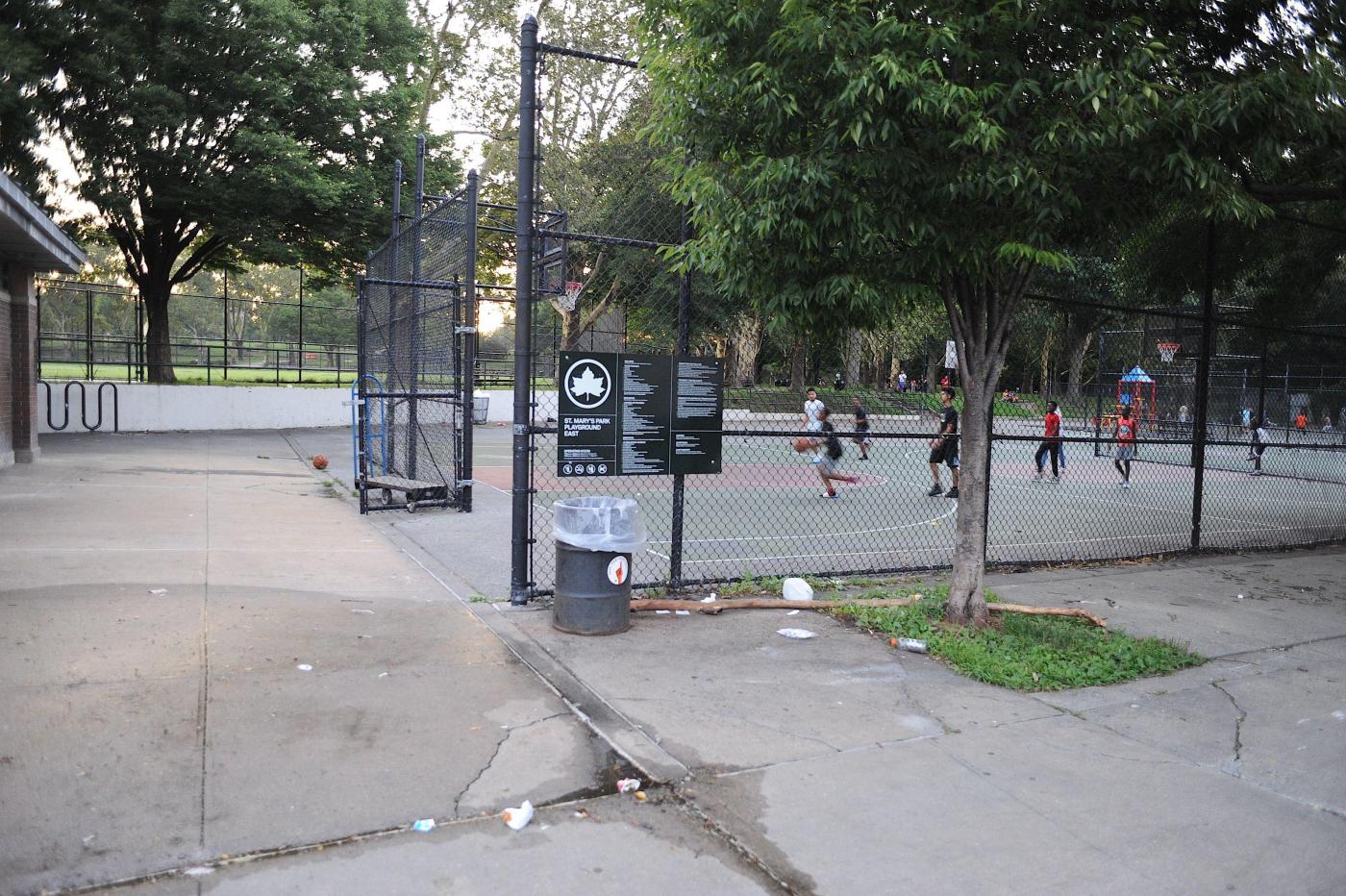 The smallest player on the court was the one his teammates looked up to.

Jayden Goodridge, killed by a gunshot fired in the Bronx this past Sunday, was always a leader during his four years as a 5-foot-2 point guard for the renowned Riverside Hawks AAU team, his former coach told the Daily News.

“A huge heart, a big smile, loved by everyone,” said coach Andre Thomas. “He always knew how to keep the fellas laughing. Good times, bad times, just a pleasure to coach, on and off the court.”

Goodridge, 21, was standing just outside St. Mary’s Park near E. 149th St. and Jackson Ave. in Mott Haven when the shooter opened fire Sunday night, with a fatal bullet hitting him in the stomach, cops said.

Police said it was unclear if Goodridge, known to friends by the nickname “Jiggy,” was the intended target of the bullets fired by gunman riding an e-bike. A second man on the Bronx street corner was wounded before the killer fled the murder scene.

A relative said Goodridge was walking with some friends on their way to visit another pal when the shooting started.

“He was screaming when he got hit like he was really, really scared,” Haynes said. “He ran and collapsed across the street right there in front of the school. There was a lot of blood on the ground after they put him into the ambulance. It was crazy, just crazy.”

The victim’s mother, Jennifer Gay, 42, said she was told that the e-bike made a U-turn before its rider started shooting.

Goodridge died just 10 days before his birthday, Nov. 23, which fell on Thanksgiving the year he was born. His grandmother nicknamed him “Butterball” to mark the occasion.

Gay remembered taking her son to a Harry Potter movie when he was just a few months old. She said the other movie goers were shocked to see that a baby had been in the theater the entire time.

“He was quiet and they were so surprised he was there,” she said. “Always good.”

Gay saw early on that her son would be interested in sports, and signed him up for basketball when he was 5 years old.

“He was so very athletic,” Gay said. “He taught himself how to do a backflip from watching wrestling.”

Hailey, Goodridge’s 13-year-old sister, was devastated by her brother’s death.

“He’s really fun to be around,” Hailey said.

Gay said she believes her son’s death was a case of mistaken identity.

She said she is sick of gun violence.

“I just feel like nobody cares anymore,” Gay said. “It’s so ingrained into kids’ brains that no life is worth it. Not even your own life is worth it. I don’t think changing policies will help. I don’t see a bright future. They’ll always find a way.”

Goodridge’s uncle, Miyani Mcnamee, 29, worked at the Kips Bay Boys and Girls Club, where Goodridge was a member. They developed a bond because of the countless hours they spent on the court together.

“I spent lots of time with him, and I don’t mean like once a week,” Mcnamee said. “He was there with me seven days a week, 6 o’clock in the afternoon to 9:30 at night. We’d have talks about everything.”

Family friend Deirdre Shaughnessy recalled Goodridge as both a baller and a devoted son, a “nice respectful kid” who always greeted her with a big hug and a kiss. She remembered driving him home after games where the opponents were shocked by both his size and his skills.

“Oh, he was fantastic,” she said. “It was an amazement. People didn’t expect it because he was so short. He was very kind, a nice respectful kid. His mother raised a good person … He was very well loved, let’s put it that way.”

The second victim, also 21, survived after a bullet grazed his lower lip and he refused medical attention at the scene, according to cops. Goodridge, who lived with his family in the Wakefield section of the Bronx, died Monday at Lincoln Hospital.

“All he really wanted to do was play basketball and stay out the way,” said Keyanna Drew, a high school friend of the victim. “Jayden was a great soul . . . If I ever needed advice or someone to talk to about basketball or just life, Jayden was the guy.”

The Riverside basketball program was home to future local hoopsters turned NBA stars like Kenny Anderson and Chris Mullin — and Goodridge was intent on following in their footsteps, playing there from 2016-19.

“Now I’m just focused on being a great basketball player and making my mom proud,” Goodridge tweeted in 2017. The undersized guard briefly wound up on the practice squad at the College of Mount St. Vincent in the Bronx, said Thomas, who was still reeling from news of his slaying.

“My first reaction was I just looked at the phone when I got the message,” he said. “Then I ran to my wife, I just fell out and yelled, ‘Jayden is gone!’ I didn’t want to believe it.”

Police were scouring the area for surveillance footage to help identify the fugitive killer.

The graduate of Archbishop Stepinac High School was also recalled fondly by his alma mater in a Facebook post, while his friend Jose Garcia remembered Goodridge for his relentlessly upbeat personality.

“He knew how to put a smile on your face without even trying,” said Garcia, 21. “If you loved Jiggy, Jiggy loved you. He showed love to any and everybody … He was that friend that you wanted to have in your life.”