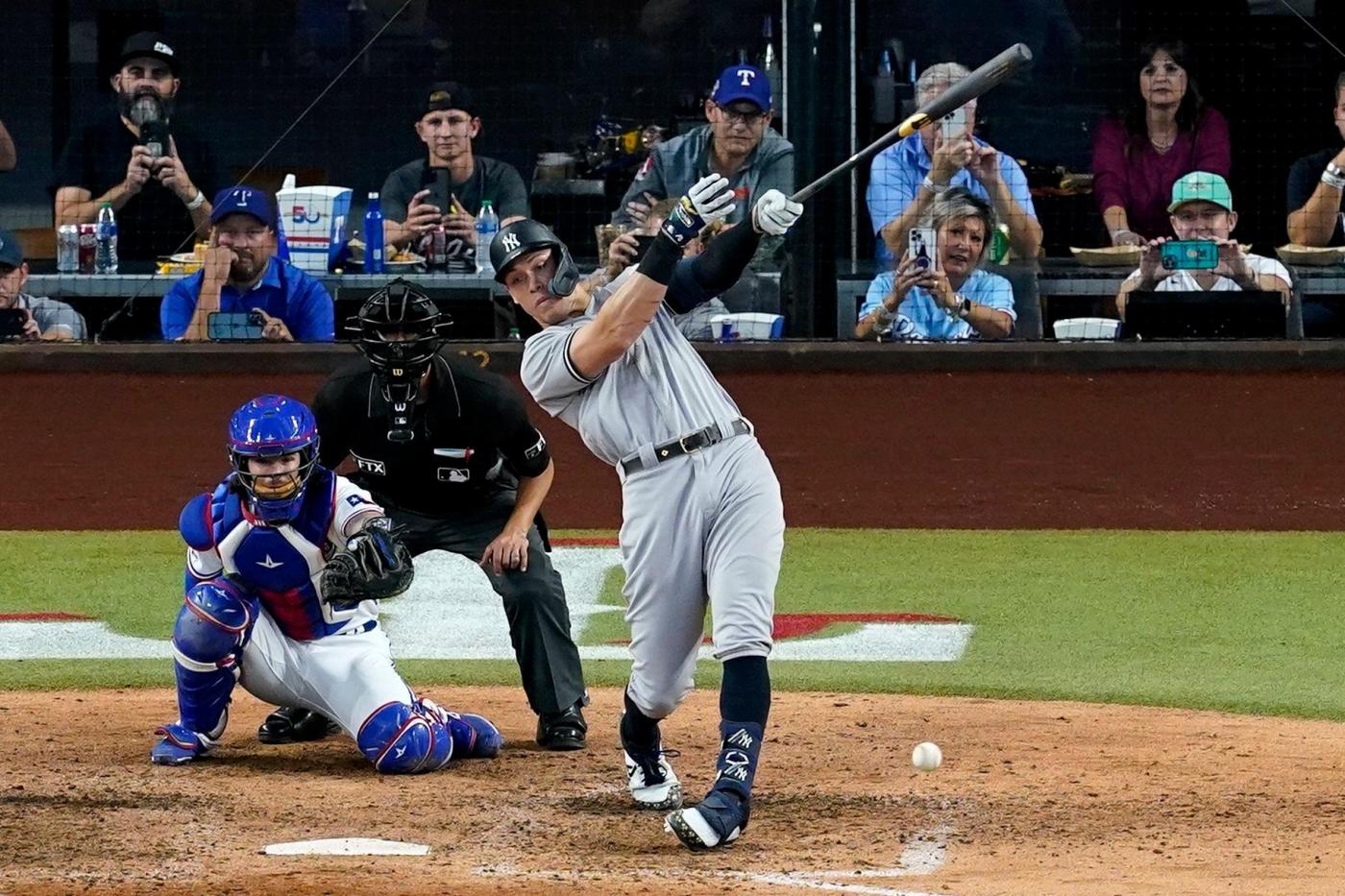 ARLINGTON — Aaron Judge let a little frustration slip Tuesday afternoon. After popping out in the fifth inning, the Yankees’ slugger, who has been so calm throughout his historic season, slammed his batting helmet back in the rack.

It was the fifth straight game without a historic home run for Judge. The Bombers instead got power from Oswaldo Cabrera, Oswald Peraza and Kyle Higashioka as they rallied to beat the Rangers 5-4 in the first game of a day-night doubleheader at Globe Life Field.

Judge went 1-for-5 Tuesday and remained tied with Maris as the only two men in American League history to his 61 home runs in a single season. The slugger, who grounded out to shortstop in the ninth inning, has two games remaining to try and surpass that mark.

As if anxious to get this chase for 62 over, Judge was more aggressive Tuesday afternoon. He swung at the first pitch he saw, a 97-mile an hour fastball from right-hander Jon Gray, which he grounded out to third. Gray got him to foul off a 98-mph fastball and swing past an 84-mile an hour slider in the third inning. He flew out to right field on a 1-2 fastball. In the fifth inning, he popped up a 2-2 slider to the first baseman.

Instead, the Yankees kids’ highlighted the offense.

Cabrera put them on the board with his sixth homer of the season in the first. He hit a 378-foot shot to right-center field. Over his last 21 games, the rookie has hit all six of his big league homers, five doubles and driven in 15 runs. In the second, rookie Peraza got his first homer in the big leagues. It was a 399-foot shot to left field. Marwin Gonzalez singled in Peraza in the fifth. Higashioka hit his career-high tying 10th home run of the season in the seventh. The catcher did not hit his first home run this season until June, but has hit three home runs in his last 13 starts.

In the top of the eighth, Judge singled on the first pitch he saw from lefty reliever Brock Burke and the crowd responded with boos. The slugger went on to score the go-ahead run on Harrison Bader’s single.

Jameson Taillon allowed four runs on seven hits and two walks. He struck out five over seven innings in his final start before the playoffs. He gave up a two-run single to Josh Jung in the first and a two-run homer to Adolis Garcia in the fifth.