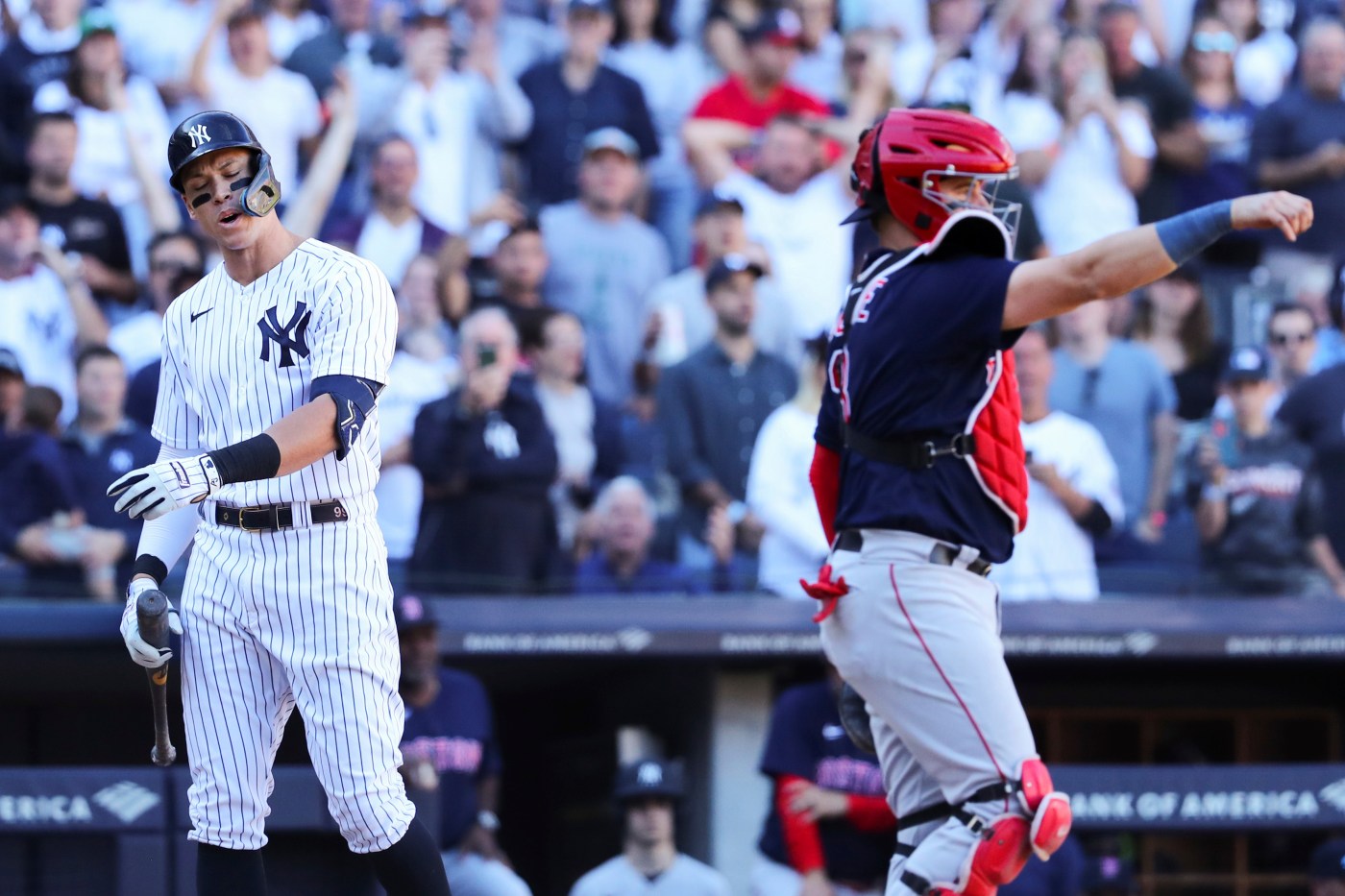 If the Red Sox cared only about keeping Aaron Judge from hitting his history-tying 61st home run of the season against them, they’re succeeding.

In every other category, they’re getting beat at Yankee Stadium this week.

Nick Pivetta kept Judge quiet on Saturday afternoon in the Bronx, but the rest of the Yankee lineup pummeled him as the Yankees glided to a 7-5 win.

Every time Judge comes to bat, the sellout crowd stands up and the ballpark goes mostly quiet as it awaits his 61st home run, which will tie Roger Maris for the single season record in the American League.

“It’s a cool scene,” manager Alex Cora told reporters on NESN after the game. “These fans are great, do an amazing job rooting for the team and rooting for him. We have one more night here.

“Our goal is to win ballgames, not to avoid him hitting homers.”

Making his 31st start of the season, Pivetta is pitching like a guy who is worn down.

To his credit, he attacked Judge all day, including in his first at-bat of the day, when Piveta threw three straight belt-high fastballs to the best power hitter on the planet. Judge fouled off the first two, then struck out looking on an inside fastball to put him away.

While Judge wasn’t going deep, a handful of others were.

Two batters later, Pivetta fell behind 3-0 to Gleyber Torres and threw him another 94 mph fastball over the plate and Torres did what Judge couldn’t, blasting it 394 feet to left-center.

With one man on in the second inning, rookie Triston Casas took a beautiful swing on a hanging curve from Domingo German and lofted it over the left-center field wall for his second opposite-field home run, and his fourth homer overall. He had an impressive day at the plate, adding three walks in a 1-for-2 day.

He’s hitting just .130 through his first 17 big league games, but has a .701 OPS and is showing a tremendous plate approach while playing a sure-handed first base.

“The opposite field homer, that was really good,” Cora told reporters. “The last at-bat, recognizing the situation. The one against Zack Britton, that’s not an easy lefty. Little by little he’s getting there. The results will be there. The process is great.”

Watching Casas in the same lineup as Bobby Dalbec, who was recently recalled to take the place of the injured Trevor Story, brings up the question of why it took so long for the Sox to go from Dalbec to Casas at first base. Dalbec, starting as the designated hitter on Saturday, was 1-for-5 with three strikeouts and seven men left on base. He struck out several times to end scoring threats, and struck out as the final out of the game with the tying run on first.

Reese McGuire, the left-handed hitting catcher the Red Sox acquired at the deadline for lefty Jake Diekman, added a solo shot in the second inning to put the Sox ahead 3-1. McGuire is hitting .361 with three homers in 30 games since joining the Boston lineup.

Pivetta was leaking runs all day. He gave up one in the second, then two more in the third when he hung a slider to Oswaldo Cabrera, who launched a two-run shot to right-center. Josh Donaldson singled home another run in the fifth and Pivetta’s day was soon after complete.

He allowed five runs in five innings, striking out eight but walking four.

Pivetta seemed to nibble at every batter except Judge, who he attacked fearlessly until the fifth, when he just missed with a full-count fastball to walk the Yankee slugger. He finished the game with just 54 strikes on 95 pitches.

“He did OK,” Cora said. “Obviously, he was wild. It looked like it was 50-50 as far as strikes and balls. The slider to Oswaldo didn’t get there. A few groundballs that went by. The walks obviously put him in a bad spot. He battled.”

It’s been a difficult stretch for the 29-year-old Pivetta, who has been durable, but not consistent. After ending June with an 8-5 record and 3.23 ERA, he’s gone 2-6 with a 6.40 ERA in 15 starts since. It’s the opposite of last season, when Pivetta looked strong in his final appearances, but he’s under team control for two more years and is sure to be a key part of the rotation going forward.

The Sox scratched together a run each in the sixth and seventh, but John Schreiber gave them both back on a two-run shot by Anthony Rizzo in the seventh. That came one batter after he struck out Judge swinging on a 94-mph fastball a few inches inside.

The Yanks have won all three games this series and have a chance at the sweep on Sunday night, when it’ll be rookie Brayan Bello against Nestor Cortes on ESPN.