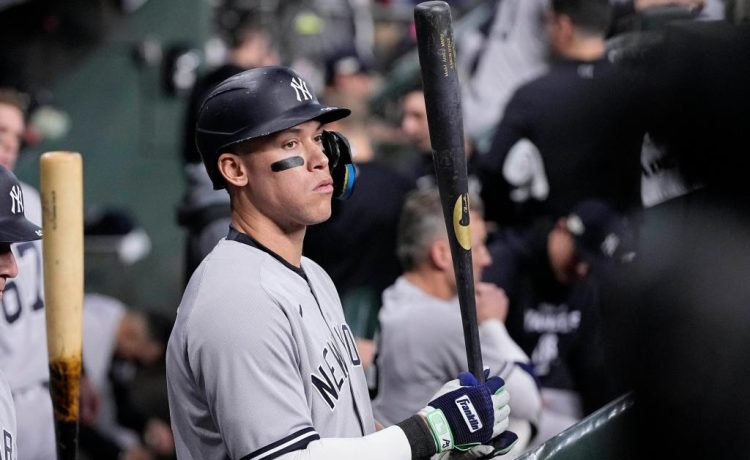 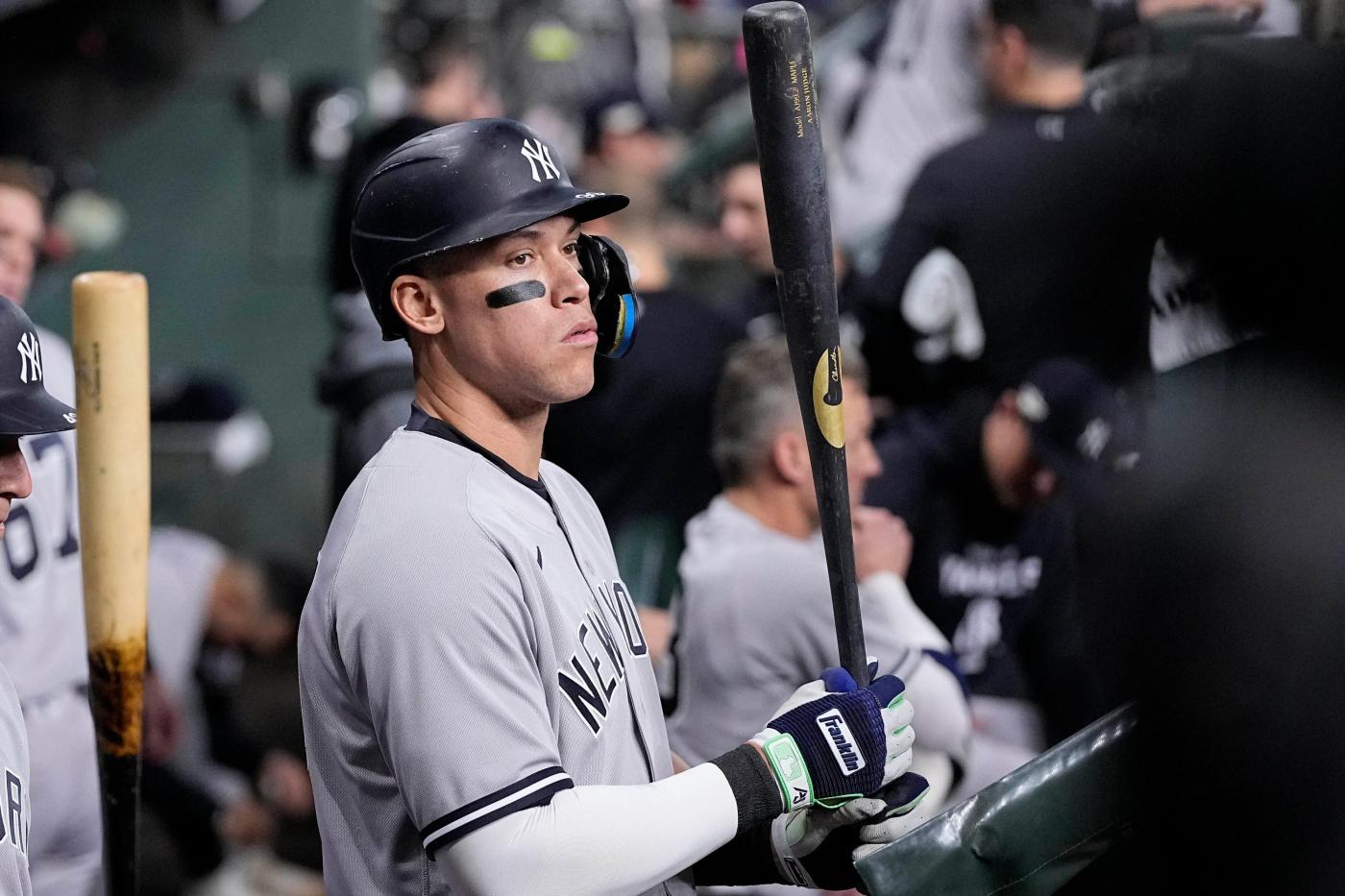 Considering the hysteria and hyperbole surrounding the signing of Aaron Judge, would you be surprised if the Yankees Entertainment and Sports Network is able to get each of his at-bats sponsored?

On Wednesday morning when Judge agreed to a new sky-scraping (9-year, $360 million) contract, sighs of relief were accompanied by visions of dollar signs for anyone with a financial stake in the Yankees — including YES suits.

While Judge leaving wouldn’t have wrecked the Yankees brand and rich history, which YES uses to promote the network, sell to advertisers and TV distributors, it would have ripped a short-term, gaping hole in the product and the organization’s credibility. Now, that nightmare is over, replaced by dreams of JudgeMania.

There was even made-for-TV drama (or at least a Yankeeography) elements in the way the deal went down. It began with the outfielder nixing a lucrative offer before the season started, and included, Yankee brass being kept in the dark, an erroneous tweet from The Post’s Jon Heyman that No. 99 (“Arson Judge”) appeared to be headed to the Giants, and finally Hal Steinbrenner, in Italy, closing a deal during a telephone conversation with Judge.

Moving forward, the title of the script is High Expectations. It should do well in the ratings department.

For Judge and his family, cashing in is a blessing, a result of hard work and timing. It also arrives with the weight that comes with a constant media spotlight. That type of heat brings sweat and pressure. Judge felt it during his historic home run chase. That was about him trying to break a record while playing for a new contract. What if this one is about struggling?

What if Judge gets off to a horrendous start in 2023? There will be some commentators, and assorted VOS Gasbags, who will attribute it to Judge getting the fat contract. The other side will argue Judge’s history shows that trying to lead the Yankees to their first World Series appearance since 2009 is enough to keep him hungry.

For YES, all that matters is that Judge is in the lineup. Either way, whether he’s battling out of a slump or again going on a home run tear, Judge is destination TV. The casual fans who tuned in to watch him in 2022 will stick because of the contract hype. The huge deal not only added to his mystique, but also to the number of storylines available to YES voices.

Yet, will they get into issues about how the richest contract in Yankees history may affect Judge? Or will their conversations be confined to what’s going on with him between the lines?

Remember, before Steinbrenner dumped all that cash on him, Judge wasn’t thrilled with YES following him in the dugout with its cameras. Now, Judge (outside of the owner and maybe the GM, Brian Cashman) is the most powerful person in the organization. And he’s locked in (probably as Captain too) for at least nine seasons. Will his critiques of YES be more expansive and frequent?

Something tells us YES honchoes stopped caring about those critiques when Judge decided to stay in the Bronx.

Not only did the Mets lose a superb pitcher when Jacob deGrom signed with Texas, SNY lost a ratings magnet.

When deGrom pitched, it was an event. His injury-plagued career made the buildup to his starts even bigger. Not only was this reflected in the ratings, his mound dominance also brought out the best in the SNY’s broadcast booth, especially Gary Cohen, whose voice captured the excitement and drama of each JdG start. Those occasions will be missed.

While Max Scherzer’s starts were much anticipated, the telecasts didn’t generate the same sizzle as a JdG outing. And it’s doubtful Justin Verlander’s appearances will produce the same booth electricity, and ratings, as deGrom did.

The cockeyed world keeps on spinning as the MSG Network/Comcast carriage dispute in New Jersey and Connecticut drags on — with a twist.

Recently, MSG Networks tweeted out that in New Jersey, Comcast Xfinity “just raised” its Regional Sports Network fee “40% to $10.85.” The RSN fee is higher than it was “BEFORE” Comcast dropped MSG Networks over a year ago.

So, those Comcast Xfinity New Jersey subscribers, unable to access MSG, are now paying a higher RSN fee while getting less sports programming (no Rangers, Knicks, Devils, Islanders and the Giants live postgame shows). Makes a lot of sense, right?

Mets-A-Holic, Evan Roberts was shaken over the departure of Jacob deGrom. No surprise there.

Yet Roberts was so bent, he took it out on the messengers. On Monday, during his WFAN/SNY afternoon-drive simulcast with Craig Carton, Roberts not only said the organization didn’t always treat JdG with the respect he deserved, but added he didn’t like the way SNY covered the pitcher’s departure.

When Carton asked Roberts to be more specific, the talkie obliged singling out veteran anchor Gary Apple and SNY’s baseball insider Andy Martino. Roberts said he had “issues” with both voices, accusing them of being “shills” for the organization.

Me thinks Roberts, the Super Mets Fan, was a bit too emotional about his guy, Jake. Yes, Apple and Martino had a different take than Roberts. It was not a fan’s take, a talk-radio take. Nor should it be. The SNY voices were balanced. They were fair.

The frequent “feuds” between WFAN personalities make us wonder how many are actually real or just designed for cross-promotion. A new one involves morning mouth Norman Julius Esiason punching down at America’s-Know-It-All, Brandon (Tiki and) Tierney. On Wednesday, NJE closed his show saying: “Stay tuned for Tiki [Barber]. Tiki does a great show.” Perhaps his canceling Tierney from the promo had something to do with Tierney dumping on the Esiason-heavy “Audacy Sports Minute.” “They [the Sports Minute] are worthless,” BT said on the air. “I don’t listen to them.”… CBS Sports is using its No. 1 team, Jim Nantz and Tony Romo on Sunday’s Jets-Bills tilt. That means we won’t get the filibuster provided by Ian (The Bird) Eagle and Charles Davis. Got to give Bird credit. He can launch into a story or anecdote after the whistle blows and finish it just as the ball is being snapped. Unless, of course, the always chatty Davis interrupts him. … The high minds inhabiting the Valley of the Stupid really engaged in some brain-stretching to come up with the following debate: Will Mets fans boo Jacob deGrom when he returns to Citi Field with Texas.

DUDE OF THE WEEK: TYLER ADAMS

For providing a memorable moment during Team USA’s World Cup appearance. The poise and insight Adams showed in Qatar when being grilled by an Iranian reporter provides hope that the next generation of kids are indeed alright.

DWEEB OF THE WEEK: LINCOLN RILEY

What does it say when the USC head coach allows his already-injured quarterback (Caleb Williams) to re-enter a game for the final possession down by 23? Makes no sense — football or otherwise.

What Brian Cashman said: “We had no expectations about when or how the [Team Judge] decisions would be made.”

What Brian Cashman meant to say: “We had no idea what was going on. It was like negotiating with the CIA.”