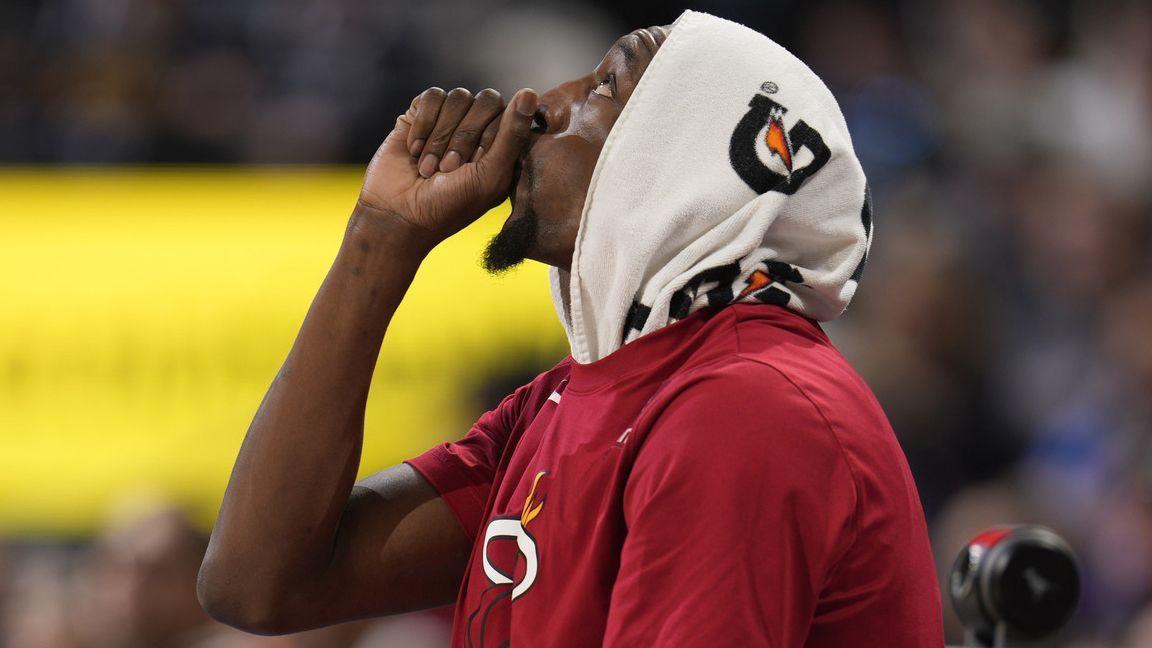 The game against the Utah Jazz was turning. The lead no longer was secure. Something needed to be said to the team.

And then, at that precise moment, as 42-year-old Miami Heat captain Udonis Haslem was about to speak, he felt a tap on his shoulder.

Based on what he had tried to cultivate these past six years, it was as if it was divine intervention.

To Haslem, to a degree it was, as Bam Adebayo seized the moment.

For all the strides Adebayo has made since being drafted in the first round in 2017 out of Kentucky, the defensive completeness, the emerging scoring, he largely stood as gentle giant.

But now, as Haslem and coach Erik Spoelstra have noted, it is turning.

“This,” Haslem said, “is an alpha-male sport, and it’s OK to let that other side come out when you step out on the court. You don’t have to be that well-mannered kid who was raised in the trailer by your mom in North Carolina.”

So in the heat of that moment, Adebayo wasn’t.

“The fouls were starting to go the other way for us,” Haslem said of that big-voiced Adebayo instant against the Jazz, “and things could have started going the other way. You could feel the energy slipping away, and he said, ‘No, no, not tonight.’ “

For all Spoelstra had nurtured, for all the Heat development staff had elevated, this was the moment when a leading man became a leader.

“He’s growing and really emerging with his voice,” Spoelstra said. “It was as loud as it’s been when they took the four-point lead. He had that huddle and he made sure everybody just was focused on that next possession and that it didn’t lead to a couple more bad possessions.

“Everybody responds to Bam. He doesn’t say something all the time, and when he does say something, everybody is paying attention. But he’s growing in that role.”

In seizing that moment, it was as if torch had begun to be passed.

“I mean, I’ve been here for six years, so I’ve got to lead in here with something,” Adebayo told the Sun Sentinel of daring to be vocal in a huddle dominated by veterans in their 30s. “I mean, it’s just growing into the player they want me to be. They want to be like The Captain, they want me to be like UD, just getting out of my comfort zone.

“When I first got here, I wasn’t saying anything. And that was just me building my trust with everybody. But I feel like it’s just trust and being an example. One thing I always did, I never liked to talk, but I would always, when I got on the court, be that standard and example. So now being with UD for six years, I’ve gotten out of my comfort zone of being not only an example on the court, but the voice also.”

It is, Haslem said, what makes Adebayo the real deal, not hollow bravado and bluster.

“At first,” Haslem said, “you have to hold yourself to a standard, or no one will listen to you. That takes work for a guy coming out of college. And for as mature he looks, Bam is only 25. So it took work to get to that point. Once you do that, and people can see that, your voice will resonate.”

As it has. Loudly. Profoundly.

“The next step as you get older in this league,” Spoelstra said, “and when winning really matters to you as a great player, which it does to Bam, then you start holding everybody accountable, including the staff. I want it to be important to everybody.

“Whenever we go through a prep, a film session, a practice, a game, a huddle, I want to hear his voice. Because he is the anchor of our defense and he has to make it as important to each one of us as it is to him. And he’s starting to find his voice now, particularly with this year’s team.”

LIMITED IMPACT: Yes, Adebayo not being among the 10 frontcourt players with the most fan votes for Eastern Conference All-Star starters is a travesty. But it also does not matter. Only the top three finishers in the combined fan/media/player balloting are named starters. And with all due respect to Adebayo and his inspiring two-way play, it is difficult to make a case for Adebayo over Giannis Antetokounmpo, Kevin Durant or Joel Embiid. So, from the start, it was about whether Adebayo would be selected as a reserve by conference coaches. And, of that, there would appear to be little doubt, based on an Adebayo skill set that plays exactly to what coaches preach. Beyond, say, Jayson Tatum, there does not appear to be another East frontcourt player positioned to outflank Adebayo for the All-Star Game, with all due respect to the likes of Pascal Siakam, Myles Turner, Kyle Kuzma, Jarrett Allen or Julius Randle. As for Tyler Herro’s Eastern Conference backcourt candidacy, it would appear Donovan Mitchell and Kyrie Irving will lock down the starting berths, with ample East competition there from the likes of James Harden, Tyrese Haliburton, Jaylen Brown, Trae Young, Darius Garland and Bradley Beal, among others.

MORE BAM-A-THON: While Western Conference coaches won’t impact Adebayo’s All-Star prospects, Los Angeles Lakers coach Darvin Ham offered significant praise ahead of his team’s Wednesday game against the Heat. “The kid has great feet, great active hands,” Ham said. “Obviously, he plays offense and defense above the rim. Really good lateral quickness. Really quick twitch in terms of after he slides to keep the ball in front of him, the ability to spring up quickly and get a block or a good contest on a shot. He’s second to none in that area. And offensively, just his ability to handle the ball and playmake. He’s a really underrated passer in my opinion, and he plays with such force. He forces you to put multiple bodies around him — shot goes up and you got to account for him.”

CASE MADE: Even amid his whirlwind that has had him with Toronto Raptors, Brooklyn Nets and Chicago Bulls (and Slovenian national team) over the past 12 months, former Heat guard Goran Dragic remains an ultimate teammate. Lately, that has had him speaking up for Nikola Vucevic, with the center’s play for the Chicago Bulls coming under outside scrutiny. Dragic related Vucevic’s limited stats to the concessions Chris Bosh had to make with the Heat’s Big Three. “People don’t get it,’” Dragic told the Chicago Sun-Times. “They don’t. They only see the numbers. That’s not fair. I know CB [Bosh], and CB talked about that a lot. When he was in Toronto, he was averaging 22, 24 points a game. Getting touches. Then when he goes to Miami, he had seasons where he averaged 16, and then everybody, the media was bashing him, fans, too. But he was doing so many little things for the team so that [LeBron James and Dwyane Wade] could jell. Things you don’t see in the stats, things that people don’t understand.”

TRUE FALLOUT: In an ESPN interview, Durant downplayed the impact of his offseason trade demand, saying it did not directly interfere with the Brooklyn Nets’ season, contrasting the timing of when Jimmy Butler forced his move from the Minnesota Timberwolves in 2018. True. But what was undeniable was the impact the timing of Durant’s request had on the league overall and his fellow players, with some teams (including the Heat) coming to a stop with personnel moves until it was resolved. “This was a summertime thing,” Durant said. “We wasn’t playing no games. I didn’t interfere with what we were doing on the court every day. It wasn’t a question of what you were asking my teammates every day after a game or a practice.” He added, “we hashed that all up right before camp, and it was cool, it didn’t get in the way of the hoops.” Only it did, of an entire league that well might be shaped otherwise during the offseason.

6. Drop in over/under win betting total for Miami Heat from preseason projection on BetOnLine. The number this past week fell from the preseason projection of 48 1/2 to 42 1/2. It ties for the fifth-largest projected drop, exceeded only by the Minnesota Timberwolves (9 1/2), Charlotte Hornets (8), Los Angeles Lakers (7) and Golden State Warriors (6 1/2).