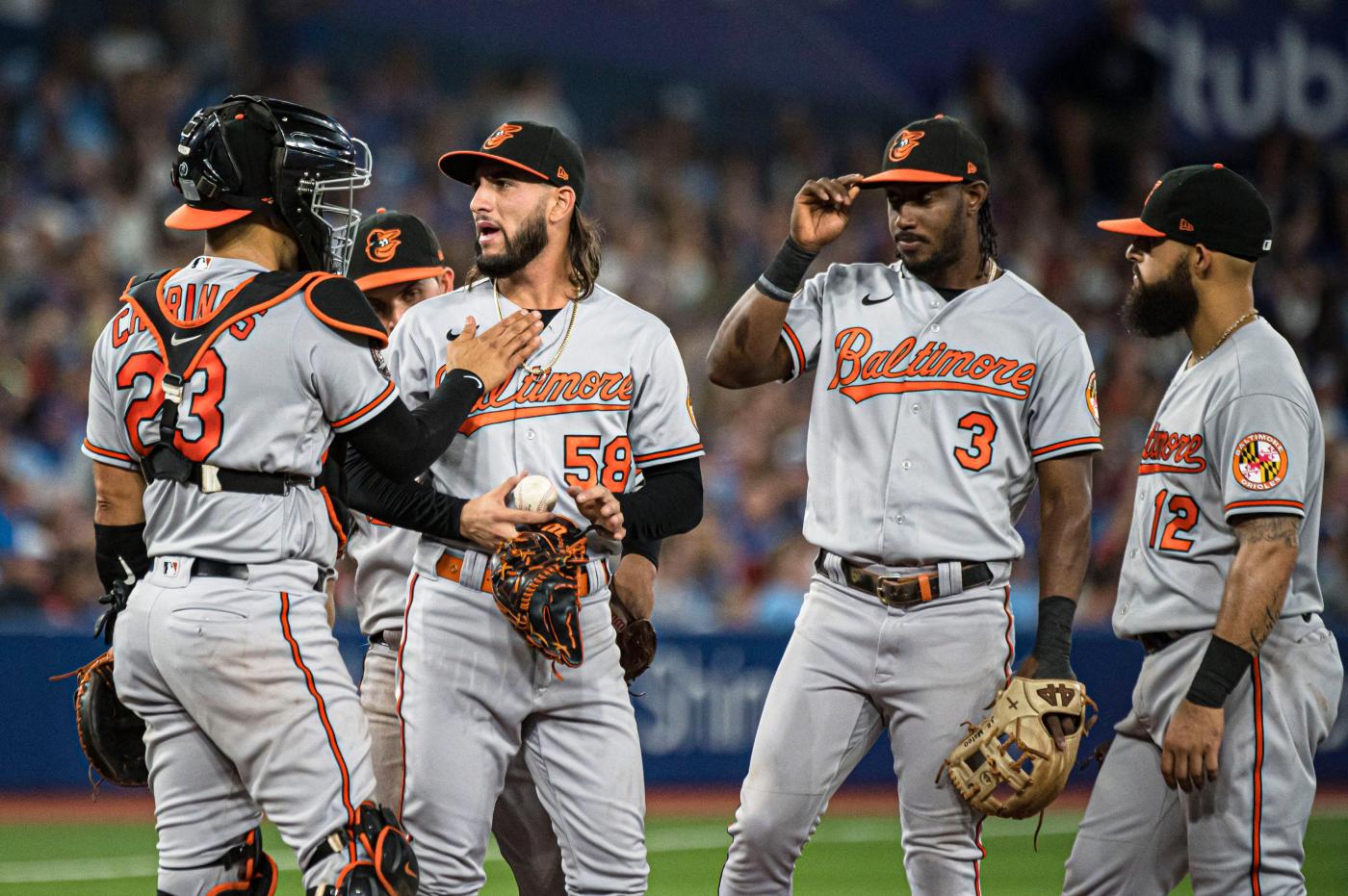 In the just more than two weeks since the deadline deal that sent All-Star closer Jorge López to the Minnesota Twins, the Orioles’ bullpen has largely avoided melting down as other relievers have moved into new roles. The offense, meanwhile, has had its struggles of late, though it’s unclear whether the freshly traded Trey Mancini would have been a solvent.

Both absences were felt in Wednesday afternoon’s 6-1 loss to finish a three-game series against the Toronto Blue Jays. With Mancini playing for the Houston Astros and count-working rookies Adley Rutschman and Terrin Vavra on the bench, Toronto right-hander Ross Stripling efficiently took a perfect game bid into the seventh inning, the second time in four games Baltimore went into the seventh without a base runner. Both outings came in series finales, with Tampa Bay’s Drew Rasmussen coming three outs shy of the feat Sunday.

Half an inning after Cedric Mullins spoiled Stripling’s effort with a single up the middle, the Blue Jays (62-54) struck for all of their runs. Dillon Tate and Félix Bautista, who served as López’s primary right-handed setup men before he was traded, had both pitched in the first two games of the series, each an Orioles (61-56) victory. With manager Brandon Hyde yet to use a reliever three days in a row, he had Joey Krehbiel replace Austin Voth after the latter’s six shutout innings.

Had López still been in the Orioles’ bullpen, it’s possible either Tate or Bautista wouldn’t be facing a third straight day of pitching and thus would have been available to work the seventh. Tate is the only holdover from Baltimore’s 2021 relief corps and has allowed runs in only two of his past 14 outings, while Bautista, a rookie, has moved into the closer’s role with aplomb, with the pair combining for 4 2/3 scoreless innings in finishing off the series’ first two games. But López’s exit has put more pressure on relievers who had worked more frequently in the middle innings.

Krehbiel has been effective, entering Wednesday with a 2.40 ERA, but two of the three batters he faced reached base. Cionel Pérez, another of Baltimore’s key relievers, allowed them both to score on a pinch-hit RBI single by George Springer on an 0-2 fastball and a two-run double to deep right field by Santiago Espinal. Louis Head later walked in a run with the bases loaded and allowed a two-run double by All-Star catcher Alejandro Kirk to make it 6-0. The Orioles entered the day with the majors’ third-best relief ERA.

“That’s gonna happen, you know,” Hyde said. “Inning started with a bloop single, then a hit and run, and bring in for me the best guy available [in Pérez], a guy that’s gonna throw 99 to 100 [mph] and got beat with an 0-2 pitch there, and it kind of unraveled after that, but our bullpen has done extremely well. Besides that inning, we pitched so well this series, and happy with how we played.”

It’s notably the first time in the two weeks since trading López that the Orioles were burned by the subsequent change in their bullpen ladder. López, meanwhile, has a 4.50 ERA for Minnesota, blowing half of his four save chances.

More impactful Wednesday was the lack of offense. Stripling, on a limited pitch count in his first start off the injured list, needed only 67 pitches through his six perfect innings. Rutschman, leading the Orioles in most offensive categories in the past couple of months, got his first full day off since late July, while Vavra was out of the lineup because Stripling tends to be more effective against left-handed hitters. The Orioles’ lone run came in the eighth after Vavra delivered a pinch-hit single and eventually came around to score.

The loss cost the Orioles a sweep that would have propelled them into a playoff spot. Instead, they trail Toronto by 1 1/2 games for the American League’s third wild-card spot and fell behind López’s Twins in the process.

“We’re happy with a series win,” Hyde said, “unhappy we couldn’t finish [the sweep] off today, especially in a 0-0 game there in the seventh and we’re right there.”

In June, Voth came to the Orioles as a waiver claim from the Washington Nationals, having posted a 10.13 ERA as a reliever with Baltimore’s regional foe.

With his six scoreless innings Wednesday, Voth brought his ERA with the Orioles to 2.81, having worked mostly as a starter. He allowed two hits and a walk while striking out three. His six innings and 86 pitches were both season highs, prompting Hyde to pull him before the decisive seventh.

“He’s only pitched into the sixth, and he finishes six, and hopefully he can continue to build,” Hyde said. “He’s done a great job for us. He’s been doing this since he’s gotten here, keeping us in games and pitching well.”

Voth said he prefers the starter’s role he’s had in Baltimore, where he said his between-start work has been key into turning him into the pitcher he’s been as an Oriole. He noted the coaching staff has helped add a sweeper — a slider with large horizontal movement — to his repertoire, a pitch to “give right-handed hitters a different look” compared to his big-breaking curveball. Wednesday was the first outing Voth used the sweeper in a game, according to Baseball Savant, which recorded him using it 10 times. He generated six swings with the pitch, getting two whiffs, two foul balls and two outs on balls in play.

“My preparation has changed a little bit more [with Baltimore],” Voth said. “The staff here has helped me a ton. [Pitching coach Chris Holt, assistant pitching coach Darren Holmes], all the analytic guys just helping me out, giving me data that I can use.

“I just kind of found my feet here, and they’ve got a great club, great players, great staff and everything. I’m just happy to be here.”

>> Vavra continued to get work at first base before Wednesday’s game, including drills to practice pickoff situations at the bag with infield coach Tony Mansolino.