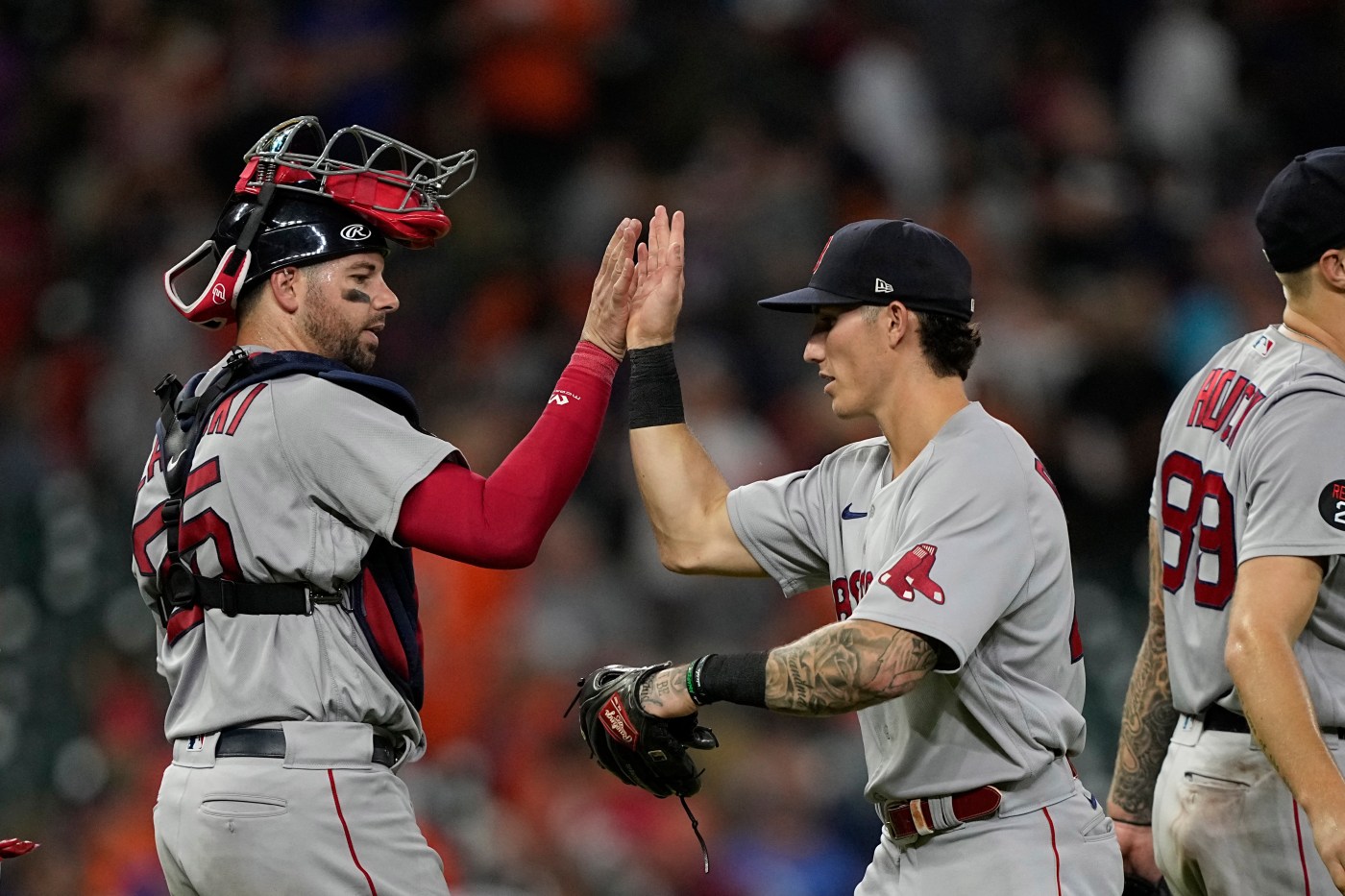 John Schreiber caught Jeremy Pena looking for strike three, then made a quick spin move coming off the mound before letting out a big scream as he slapped his hand into his glove.

If the Red Sox’ front office showed it was punting on this season earlier in the night, their players weren’t giving up just yet.

Hours after the Red Sox traded starting catcher Christian Vázquez, they persevered. Powered by a two-run homer from Jarren Duran and led by Nathan Eovaldi in what may have been his final start with Boston, the Red Sox overcame an emotional and hectic day with a 3-2 victory over the Houston Astros at Minute Maid Park.

The victory was the Red Sox’ second in a row, the first time they’ve won consecutive games since July 9-10 against the Yankees. And on a day that their future looked bleak after one of their core clubhouse leaders was dealt to the Astros, the victory was even more significant.

The Red Sox, back at .500 with a 52-52 record, are only three games out of a Wild Card spot. Chaim Bloom insists that the hope is to make the playoffs, which made the Vázquez trade even more puzzling. More trades involving core veteran players are possible before Tuesday’s 6 p.m. deadline.

The rest of the season looks uncertain, even unpromising, after Monday’s developments – even following a win – but the Red Sox are trudging forward the best they can.

“He’s going to be missed, but we’ve got to keep going,” manager Alex Cora told reporters in Houston. “The puzzle is not finished. There’s a lot of work going on right now. … We have a lot of talent in this clubhouse.

“We have the talent here to go on a run and play good baseball. Our goal is 162 plus, regardless of what people think. It doesn’t look that way for some people, but here in these walls, we’re going to keep grinding. We’re going to keep going.”

Monday began in bizarre fashion. Less than two hours before first pitch and on the eve of the deadline, news that Vázquez was dealt broke as he was taking – ultimately – his final batting practice with the Red Sox. It turned out that Vázquez had been told by Cora that a trade was being finalized, but the catcher wanted to take one last round of BP with his teammates.

Afterward, he said his goodbyes to his teammates. Reporters surrounded him as he walked off the field before he was pulled off. Kevin Plawecki, suddenly, had to get ready to catch Eovaldi.

Somehow, the Red Sox had to play a game shortly after losing a beloved teammate and possibly wondering about their own futures.

Their focus – possibly affected by the day’s events – was off in some moments as the poor defensive play that was on display throughout July followed them into August. Christian Arroyo and Xander Bogaerts committed back-to-back fielding errors in the third. A sharp chopper hit by Jose Altuve snuck under Arroyo’s glove, and Bogaerts missed a routine grounder hit by Yuli Gurriel put runners on second and third. The Astros took advantage and scored both to go up 2-1.

But Duran – who gave the Red Sox a 1-0 lead with an RBI double in the third – answered in the fifth with some rare power from the speedy outfielder. He smoked a first-pitch cutter from Luis Garcia to the right field seats for his second homer of the season and a 3-2 Red Sox lead they didn’t give up.

Eovaldi had his best start since returning from his hip injury as he went 6 1/3 innings and didn’t allow any earned runs. He recognized it could have been his last start with the Red Sox – after coming to Boston at the 2018 deadline and helping them win the World Series – but was trying not to let it affect him.

“I’m aware of it, of course, but I try not to think about it,” Eovaldi told reporters. “The more I think about it the more of a distraction it becomes, not only to myself but to my teammates. We can speculate all we want but until it happens, I’m a Red Sox. Until I’m not, I’m not.”

Eovaldi’s outing ended in frustrating fashion when he induced Martin Maldonado into a pop fly to right on what should have been an easy out. But Franchy Cordero got a bad jump on it and it somehow dropped in front of him.

Schreiber escaped any trouble by inducing Altuve into an inning-ending double play. In the eighth, he put runners on second and third with two outs but got Pena on the big strikeout. Tanner Houck closed a 1-2-3 ninth for the save.