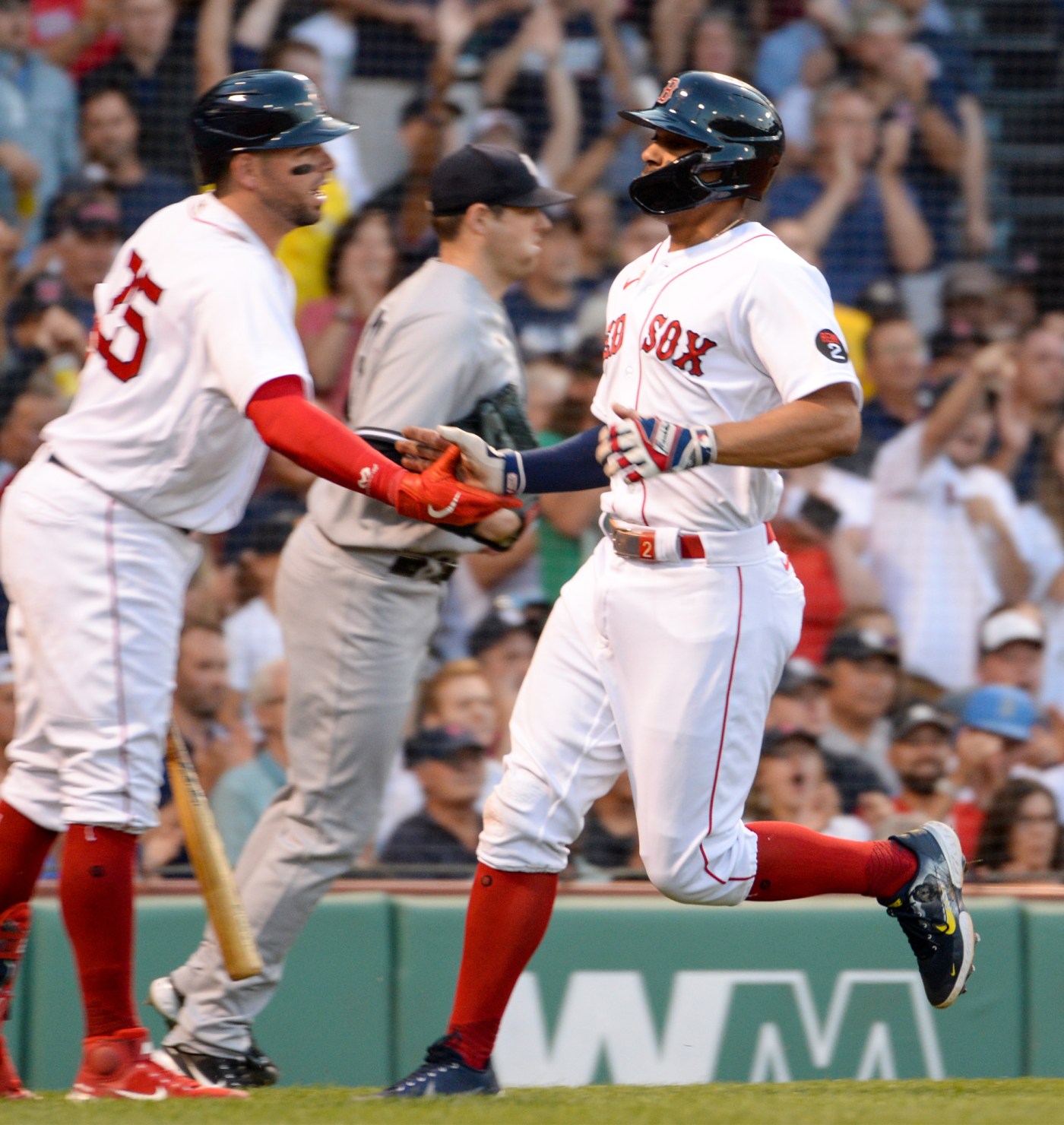 The Red Sox bullpen needed some help on Saturday night and Alex Verdugo answered the call.

After the bullpen struggled behind another strong start from rookie Kutter Crawford, Verdugo tied the game with an RBI single in the bottom of the eighth and won it with a two-run single in the 10th as the Red Sox walked off on the Yankees for a 6-5 win at Fenway Park.

It snapped a four-game losing streak after the Sox lost the first two to the Yankees after losing the final two games against the Rays earlier in the week.

When the Yankees had seen enough from left-handed starter Jordan Montgomery, who went 5-2/3 innings and allowed two runs, they turned to Michael King, who ranks second in the majors in relief innings and strikeouts this year.

When the Sox had seen enough from Kutter Crawford, who went five innings and allowed one run, they turned to Ryan Brasier, one of the hardest-hit relievers in baseball this year.

And when the game was tied in the 10th, the Sox turned to Jake Diekman, who gave up two runs on a pair of doubles by Aaron Judge and Anthony Rizzo.

To shut it down in the bottom of the 10th, the Yankes turned to Wandy Peralty, who entered with a 1.99 ERA.

It looked like the Yanks’ pen would be the difference maker, but Verdugo found a way to get it done.

It started in the eighth, when J.D. Martinez doubled off King, then Holmes walked Xander Bogaerts and allowed an RBI single to Verdugo to tie the game, 3-3.

And after the Yankees scored two off Diekman in the 10th, Rob Refsnyder started the bottom of the inning with a single. Two batters later, Jeter Downs collected his first major league hit on a dribbler through the right side of the infield. And with two outs, Verdugo roped a line drive to right field to bring two runs home and send Fenway Park into a party.

It was just the second walk-off win for the Red Sox, who improved to 5-6 in extra innings this year.

The bullpen will get some blame, but Crawford was sensational.

Spotting the black with his cutter and moving his mid-90s fastball around with ease, he struck out six over five strong innings, allowing just one run on a solo homer by Aaron Hicks. It was a hanging changeup that Hicks deposited into the right-field bullpen, and it was perhaps Crawford’s lone mistake.

Given the Red Sox have used rookie pitchers to start six of their last eight games — and Crawford struck out eight over 5-1/3 scoreless innings of relief in one of the other two games — the Sox have to be impressed with their young arms.

It wasn’t until Brasier took over that the Yankees started making loud contact with regularity. They hit three line drives to score two runs off Brasier in the sixth, when they took a 3-1 lead.

In a lot of ways, it’s starting to feel like last August.

With an imperfect roster that has several players out of position, it’s been an adventure watching the Red Sox try to catch the baseball. Saturday was no different.

For the third straight day, a Sox defender moved to a position he doesn’t play often and dropped a routine flyball.

This time it was Bobby Dalbec, who was developed as a third baseman but has played first base almost exclusively in the big leagues. Playing third while Rafael Devers recovers from a back injury, Dalbec lost a flyball off the bat off Matt Carpenter and let it drop in the fourth inning. But Carpenter mistakenly tried to take second and Dalbec quickly threw him out to end the inning.

The Sox weren’t so lucky in the sixth, when Jarren Duran took a bad route towards a Rizzo line drive into right-center. Duran, who was drafted as a second baseman and has been slowly making progress as a center fielder, zig-zagged on his way into an awkward dive as the ball bounced underneath his glove and rolled behind him. It wasn’t an error, but it cost the Sox big time as Gleyber Torres scored from first and Rizzo made it to second, eventually scoring on a single by Josh Donaldson.

The only defensive highlight for the Sox came via Kevin Plawecki, who finally threw out an attempted base-stealer. Yankees catcher Kyle Higashioka attempted his first career stolen base in the fifth inning, but Plawecki threw him out by a hair. Base-stealers had previously been 15-for-15 against Plawecki this year after going 37-for-40 against him in 2021.

The 31-year-old journeyman outfielder is playing perhaps his best baseball ever while in a Red Sox uniform.

After a four-hit night on Friday, Refsnyder was back in there at the leadoff spot and once again made his presence felt, this time with a solo shot that cleared everything in left field and ended up somewhere on Lansdowne Street.

His sixth-inning home run cut the Yankees’ lead to 3-2 and gave the Sox some hope. It marked his third homer of the season, which set a career-high. He’s played in 21 games for the Sox this year; his career-high is 58 games for the 2016 Yankees. The Yankees originally drafted him in the fifth round in 2012.

He also singled in the 10th to push the ghost runner to third base and start the rally.