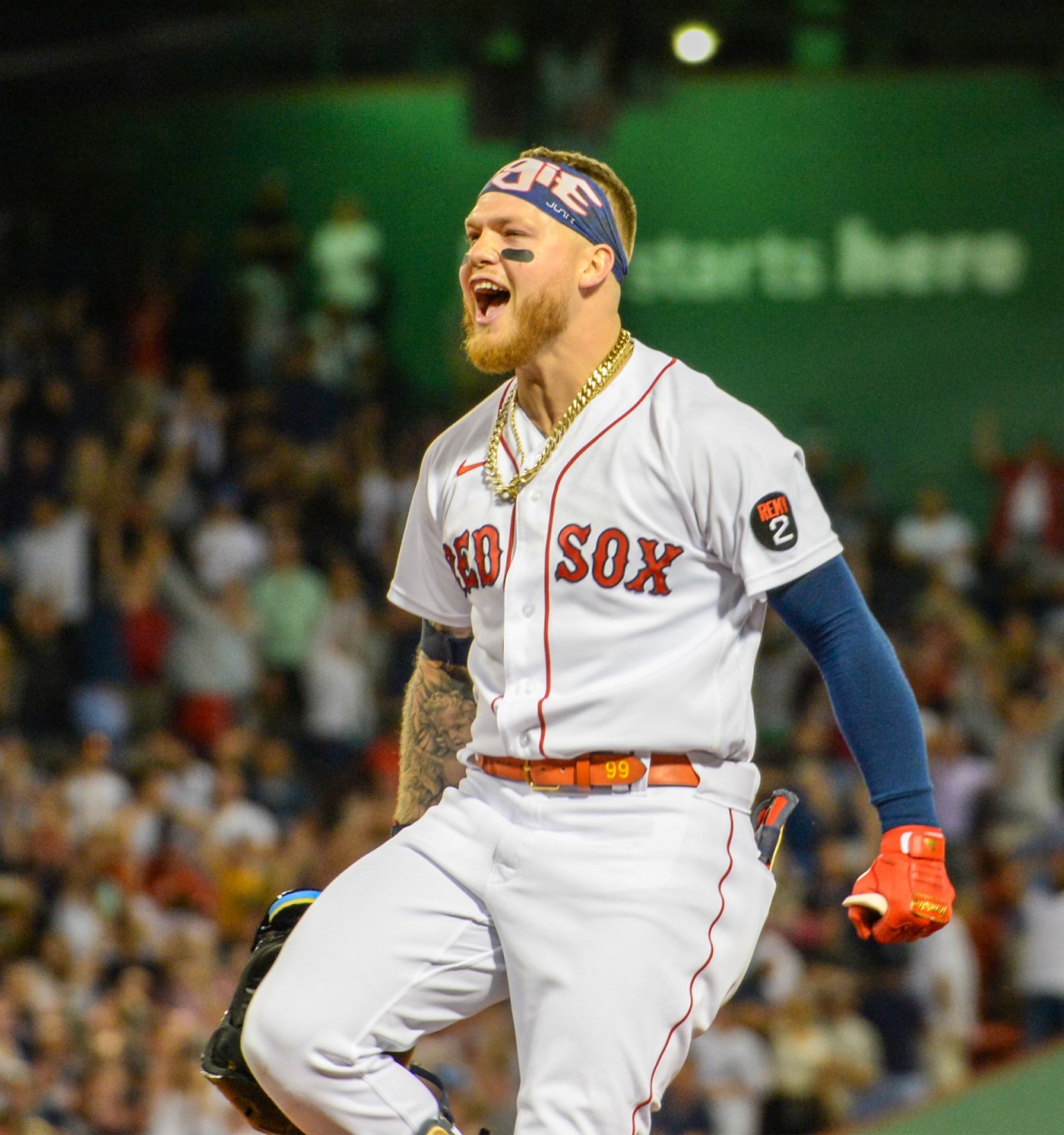 As the old baseball adage goes, it’s just one game out of 162, nothing more.

Unless that one game is the one the Red Sox won on Saturday night.

“It was a game that we felt was a must win,” Alex Verdugo said after hitting a two-run single to turn Fenway Park into a madhouse as the Sox walked off on the Yankees with a 6-5 win in 10 innings.

Just as it looked like the Red Sox were showing us their true colors, as they were about to fall deeper behind the first-place Yankees and inching closer to the last-place Orioles in the American League East, just as their bullpen was being exposed and Yankees fans were taking over Fenway Park, the Sox found a little bit of magic.

Verdugo hit an RBI single to tie the game in the eighth. And after the Yankees scored two in the 10th, rookie Jeter Downs collected his first big league hit to extend the game in the bottom of the inning and Verdugo singled two more runs home to flip the script.

“Honestly, I don’t even remember who was running,” Verdugo said afterwards. “I hit it, I knew the first run was in and I saw him waving the second one in and I was like, ‘let’s go.’ Then you could see the runner, he was moving, he was trucking. I didn’t hit it right at the right fielder, the right fielder had to cut the ball off and then throw. The time that it took him to do that was enough time for him to score.”

The Red Sox sold out to get this win.

Manager Alex Cora often says he doesn’t “chase wins,” a phrase he borrowed from former Red Sox manager Terry Francona. It was Francona’s advice to Cora a long time ago: don’t chase wins or it’ll come back to bite you later.

But Cora takes his chances every now and then. He did it earlier in the year for a big win against the Blue Jays. And with the Sox trailing by one in the eighth, Cora called on his closer, Tanner Houck, to handle the eighth and ninth.

“We battled, we took some chances late in the game,” Cora said. “I don’t like chasing wins with the bullpen, but it felt like we were putting good at-bats and felt a one-run game when Rob (Refsnyder) hits the homer (in the sixth inning) it’s like, ‘OK, we’re one swing away from tying this.’ So we were aggressive.”

The Yankees scoring two in the top of the 10th felt like a dagger.

In the bottom of the frame, Refsnyder started with a single, Christian Vazquez flew out to right and then the three-spot in the order was due up. J.D. Martinez had been removed for a pinch-runner in the eighth, so it was Downs who got the chance.

That Downs made it to Fenway Park for the game was in itself miraculous.

He was due to start for Triple-A Worcester for their 4 p.m. home game, but the team scratched him at the last second. He stayed in the Woo Sox dugout until the fifth inning, when he got a call that the Sox were calling him up to replace the injured Christian Arroyo on the active roster.

“That’s when I packed my stuff and drove on up here,” he said. “I said a little prayer on the way over.”

Traffic was so bad around Fenway Park that Downs didn’t make it to the players’ parking lot until 6:40 p.m. for a 7:05 p.m. start.

“I have no idea how I finessed and maneuvered my way in,” he said.

He had to sit for a long time until called upon to pinch run in the eighth.

“I’ve never run so fast in my life,” he said. “I was just running. Even if (third base coach Carlos Febles) would have stopped me, I don’t think I was able to stop. It was intense.”

Looking for his first big league hit in the 10th, the rookie poked a dribbler through the right side of the infield.

To get his first hit against the Yankees and to then score the game-winning run during a walk-off victory was “something you can’t really put into words,” he said.

Verdugo said he was thinking about the time they were traded from the Dodgers along with Connor Wong in exchange for Mookie Betts before the 2020 season.

“For him to come up, big situation, not try to do too much – because a lot of guys right there would try to launch, try to do something crazy – he stuck with his approach, stayed on a good pitch and shot the hole,” Verdugo said. “Good things happened.”

And just like that, the Red Sox saved themselves from a chance at being swept away on their home field in front of a national audience on Sunday Night Baseball.

Now they have a chance to tie the series and gain a little momentum before they head to the Bronx for another series with the Yankees next weekend.

To say the Sox saved their season on Saturday would be a bit dramatic.

But they sure saved themselves from feeling like they were so far beneath the Yankees’ caliber that they couldn’t even compete with them on their home field.

You can’t put a price on momentum.

“It’s not necessarily a must-win, but for me personally, it felt like that,” Verdugo said. “When we play these guys, it’s high-intensity, the rivalry is there, we want to win and being in our house, this is our stadium, this is our home.

“You can kind of hear it, even today, Yankees fans chanting and chanting. It was really loud for the Yankees. It felt like Boston was getting over-powered vocally by Yankees fans. It was one of those things where we have to get this back. This is our house. This is where we play. This ain’t their field. It felt like we needed to keep going.

“A win right now was huge.”