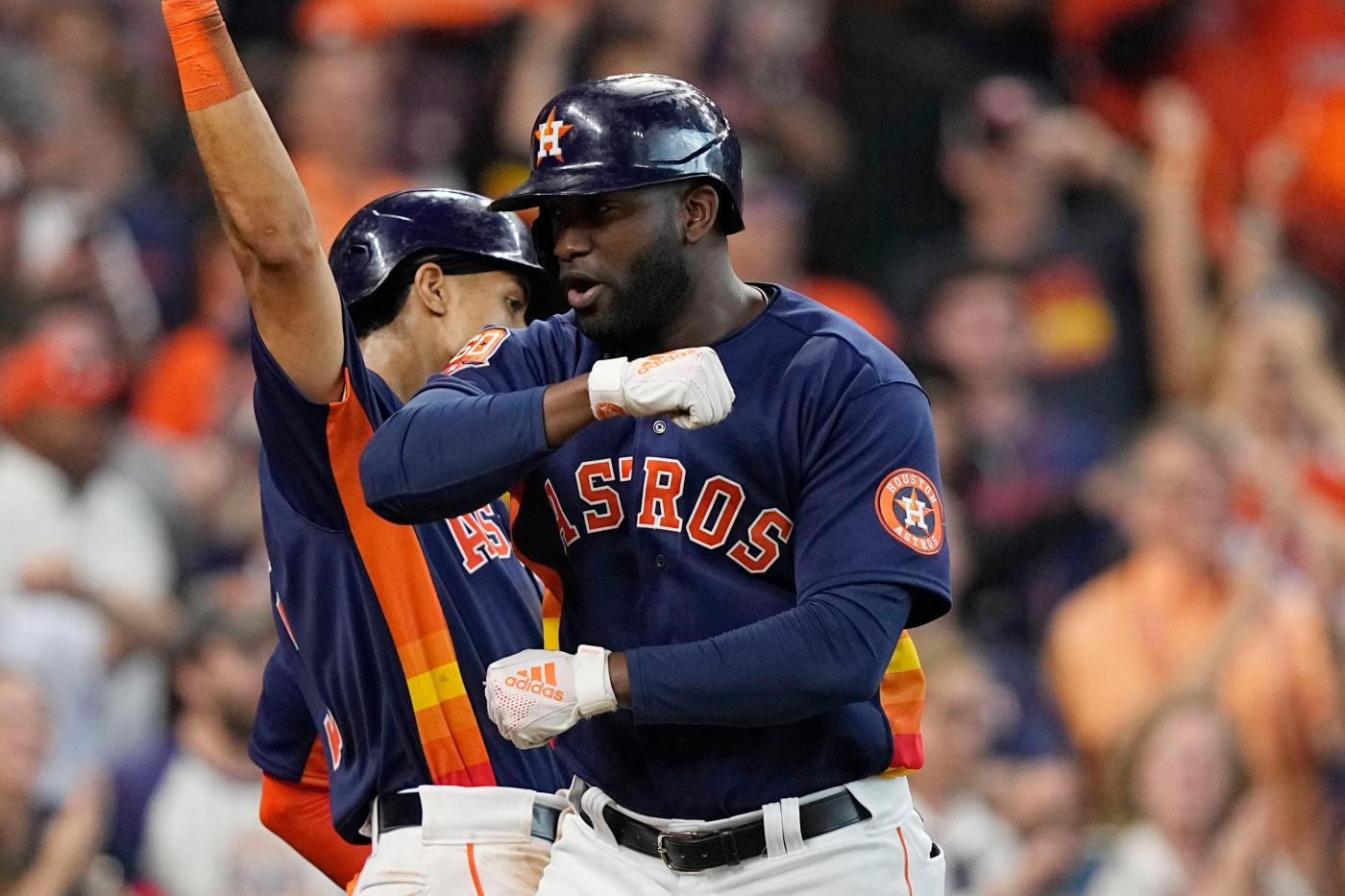 HOUSTON — Yordan Alvarez and his mighty bat did it yet again, launching a go-ahead, two-run homer in the sixth inning off Seattle ace Luis Castillo that lifted the Houston Astros over the Mariners 4-2 on Thursday for a 2-0 lead in the AL Division Series.

Alvarez was the Game 1 hero with his gut-punch, three-run shot off reigning AL Cy Young winner Robbie Ray with two outs in the ninth inning that gave the Astros an 8-7 win in a game where they’d trailed by four.

Castillo, acquired from the Reds near the trade deadline and coming off 7 1/3 innings of shutout ball against Toronto in the wild-card round, gave up an early home run to Kyle Tucker but little else as he took a 2-1 lead into the sixth.

But with two outs, Jeremy Peña singled on a blooper that fell in between second baseman Adam Frazier and center fielder Julio Rodríguez. Castillo bent down and slapped his legs in disappointment as he watched the ball drop in shallow center.

That brought up Alvarez, who hit a 98 mph pitch tailing away to the opposite field, into the short porch in left to put the Astros on top 3-2.

Alvarez, who had 37 homers in the regular season, trotted around the bases as cameras panned to his Cuban parents, who are watching their first postseason series after arriving in Houston in August. The lefty pointed to them as he reached the plate before reenacting the powerful swing that has the Astros one win away from their sixth straight AL Championship Series.

There were two outs and a runner on first in the eighth when Seattle had surely seen enough of Alvarez leaving the yard. The Mariners intentionally walked him and Alex Bregman made them pay, adding some insurance when he singled to make it 4-2.

Houston starter Framber Valdez had a solid start, allowing four hits and two runs in 5 2/3 innings. He had a different look than he did in his last postseason appearance after he and fellow pitcher Luis Garcia both got hair extensions this season.

Hector Neris got the win after getting the last out of the sixth inning to escape a bases-loaded jam. Bryan Abreu got the first two outs of the seventh before Rafael Montero came in and threw 1 1/3 scoreless innings.

Ryan Pressly walked the leadoff batter in the ninth before J.P. Crawford lined into a double play. Rodríguez doubled after that, but Pressly struck out Ty France for the save. The Astros won despite issuing seven walks overall.

The Mariners will head back to Seattle for Game 3 Saturday in a huge hole in the best-of-five series as they host their first playoff game in 21 years.

Alvarez has carried the Astros early in this division series, shouldering such a load that Houston catcher Martín Maldonado asked Alvarez after Game 1 if his back was sore because “you carry us as a team.” The 25-year-old bounced back this postseason after a tough time in last year’s World Series where he batted just .100 with no homers and six strikeouts.

The slugger who’s been criticized for poor defense in the past has been making big plays in left field, too.

Alvarez grabbed a sharp liner hit by Eugenio Suarez to end the seventh. In Game 1, he fielded a single by Suarez in the fourth and threw a perfect strike to Maldonado, who tagged out France at the plate.

There was one out in the second inning when Tucker hit a slider from Castillo into the seats in right field to put Houston up 1-0.

Crawford doubled with two outs in the third. But second baseman Jose Altuve made a leaping throw after fielding a sharp grounder hit by Rodríguez that just beat him to first base to end the inning.

Suarez walked with one out in the fourth and Mitch Haniger doubled. Carlos Santana then hit a one-hopper that Valdez fielded cleanly toward the third base side, but his throw home was offline for an error that allowed Suarez to tie it at 1-all.

Santana was out on the play after getting caught in a rundown. Haniger scored when Dylan Moore singled to put the Mariners up 2-1.

Valdez walked Haniger on a full count with two outs in the sixth, Santana doubled and Moore drew a walk to load the bases and chase Valdez. Neris took over and retired Cal Raleigh on a groundout to escape the jam.

Houston’s Lance McCullers Jr., who started just eight games this season after missing the first four months of the year with a forearm strain, will oppose rookie George Kirby in Game 3 in Seattle Saturday. Kirby pitched in relief in Game 2 of the wild-card round and became the first rookie in MLB history to record a postseason season in his first career relief appearance.