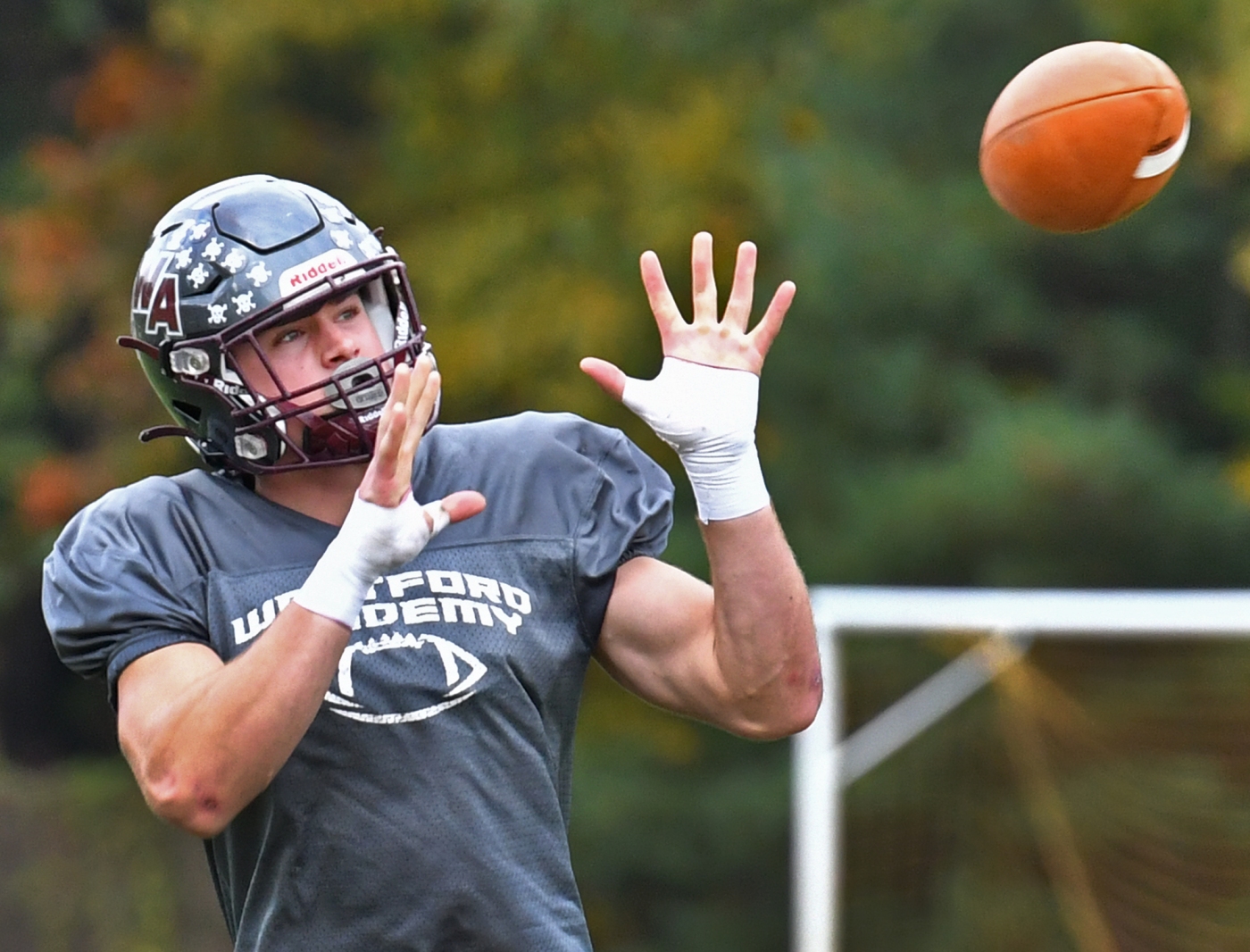 Anthony Rudiman may have picked up football later than most but he is still far ahead of his peers.

As Westford Academy catapults itself to the top of the Dual County League, it’s done so largely on the back of Rudiman, as the senior running back has developed into one of the most valuable players in Eastern Mass.

At six feet, 200 pounds, Rudiman’s size combined with his agility make him a classic power back.

“Anthony is just resilient,” Westford Academy coach Bruce Rich Jr. said. “He does not go down. If he loses two or three yards on one carry, he just wants the ball again on the next play.”

Rudiman grew up in Charlotte, N.C, where he became a devout Panthers fan while also developing an infatuation with baseball and dirt bikes. While in middle school, Rudiman and his family moved to Westford due to his father’s work situation. After not taking to the sport at a young age, he was urged to pick up football and at long last played Pop Warner in eighth grade.

“I always had size so my parents kept telling me I should try football,” Rudiman said. “I had success when I started playing in my first year and everything took off from there.”

It’s easy to understand why the Rudiman family wanted Anthony to pick up football. His dad played at Dematha in Maryland and his great uncle, Ed Sharockman, started for the Minnesota Vikings in Super Bowl IV.

Following the Pop Warner season in which he was placed on the line due to his size, Rudiman showcased promise as a member of the Grey Ghosts freshman team. A promotion to the varsity team his sophomore year saw a platooning role with then-Westford standout Bo McCormack. Now, two years later as a senior, Rudiman has blossomed into a full-on superstar. He’s constantly running people over despite his heavy workload.

“I’ve always been bigger than most kids, which obviously helps,” Rudiman said. “Playing this game has been pretty natural to me. Right after my first time on the field I knew this was the sport for me.”

WA’s lone loss this season came in week two, a 32-14 decision at the hands of still unbeaten Billerica. Following the loss, Rich Jr. noticed a decisive stat that doomed the Grey Ghosts.

“After we lost to Billerica I checked and saw that Anthony only had 13 carries for the game and said to our staff, ‘that can never happen again,’ ” Rich Jr. said. “Ever since then we’ve been asking him to carry us and he has just done a terrific job of that.”

Since the loss to the Indians, Rudiman has averaged at least 25 carries per game over the last four weeks. He most recently rushed for 201 yards and compiled two touchdowns as the Grey Ghosts dethroned perennial Dual County League power Lincoln-Sudbury. In all, Rudiman has rushed for 750 yards on the season while finding the end zone 11 times.

At 5-1, WA is pointed to make the postseason after missing out on a berth a season ago. As they pursue making a run in the Div. 2 tournament, Rich Jr. and his staff’s formula for success is pretty clear — hand the ball to Rudiman and let his physicality and vision do the rest.

“Last year we did not make the playoffs and that was a disappointment, but this year we feel like we’re in a pretty good spot,” Rich Jr. said. “We are happy with where we are right now. Our line play has been terrific. Now we just have to take that next step.”

FAVORITE PERSONAL MOMENT IN SPORTS: Seeing how close our team is this year

FAVORITE TV SHOW: The Sopranos or the Pink Panther

HOW DO YOU PREPARE FOR A GAME: Ride my dirt bike around my neighborhood

IF YOU COULD BE SOMEONE ELSE FOR A DAY, WHO WOULD IT BE: Dan Bilzerian