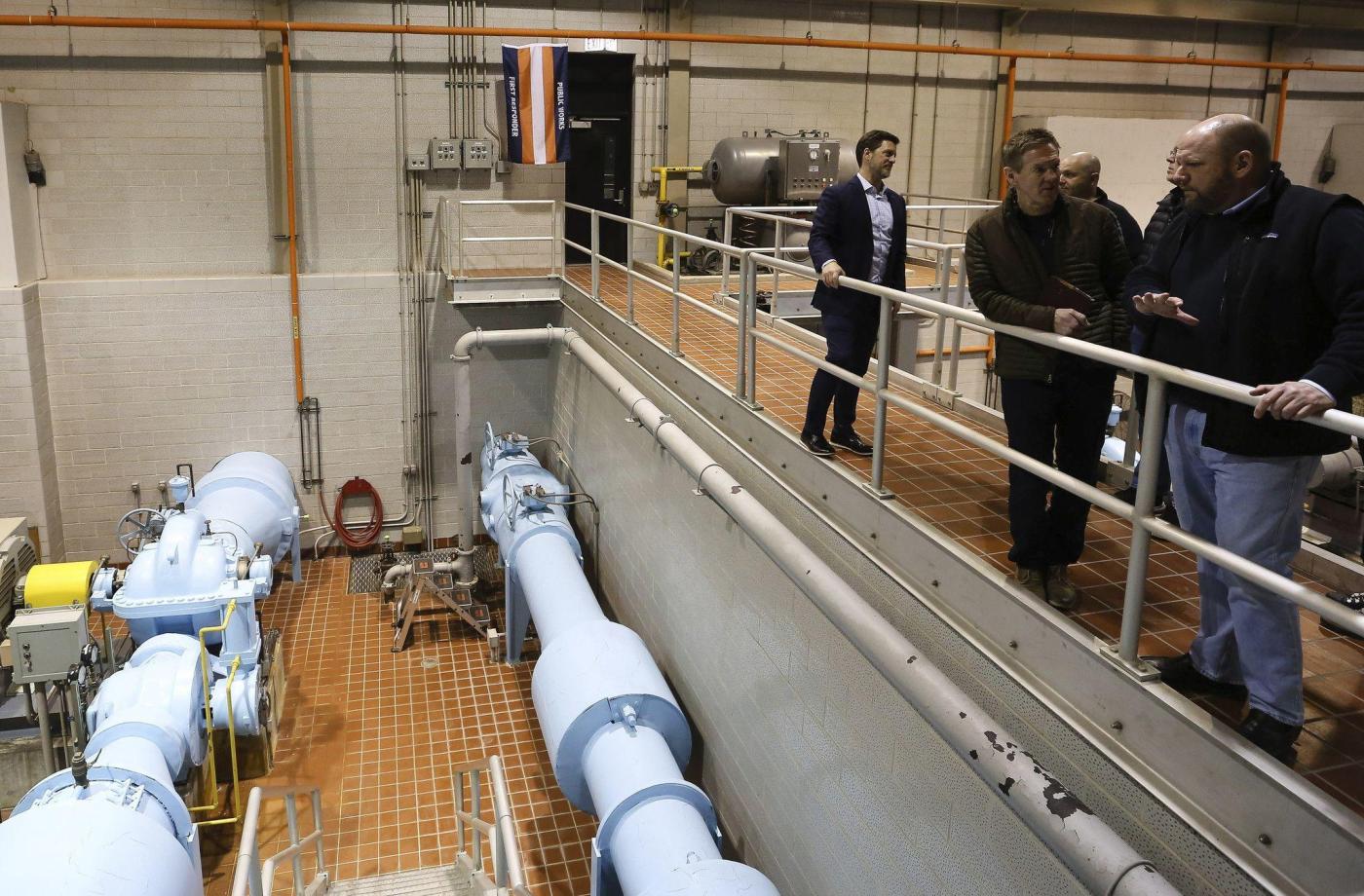 After a year 2022 packed with planning, officials at the villages of Arlington Heights, Buffalo Grove, Barrington and Lake Zurich continued laying a foundation for the future.

The year also marked a return to more pre-pandemic-like operations, with in-person board meetings and signature annual events.

In both Arlington Heights and Buffalo Grove, large-scale redevelopments are proposed for Arlington Park and planned for the former Buffalo Grove Town Center, respectively.

In Lake Zurich, large residential and commercial developments are underway and in Barrington, the village is transitioning to home rule status after a successful referendum in the November election.

All four towns have also made significant infrastructure improvements throughout 2022, officials point out.

After the Chicago Bears football team entered into a $197.2 million purchase agreement with the owners of Arlington International Racecourse at the end of 2021, team owners, village staff and trustees, and the public weighed in on next steps for the property. Bears owners proposed a $5 billion domed stadium with an accompanying mixed-use development at the 326-acre site located off of Route 53 and Northwest Highway. The Bears said they would pay for the stadium but plan to seek public financial assistance with other parts of the project — a point of contention for some residents and such groups as Americans for Prosperity.

In November, village trustees approved a pre-development agreement for the property but it did not make commitments to the Bears, who have yet to finalize the purchase of the property.

Another major move to Arlington Heights happened this year when United Airlines announced plans to move 900 network operations employees from its headquarters at Willis Tower in downtown Chicago to a newly purchased facility in the northwest suburb. United had been leasing the 200,000-square-foot industrial building at 1501 W. Shure Drive, near Route 53 and Dundee Road, since 2019. The 22-acre site was part of the former suburban Motorola campus.

“He’s done a great job of acclimating to the village and serves as a key member of our leadership team,” Recklaus said.

“Arlington Alfresco,” the pandemic-born outdoor dining venue in downtown Arlington Heights, experienced another successful year. The season closed with the first-ever Harmony Fest featuring the Taste of Arlington, which replaced the former Mane Event that took place in conjunction with the Arlington Million at the former racetrack.

“The village also passed a 0% property tax increase for a fourth year in a row,” Recklaus said, “demonstrating the strong fiscal position and strength of the local economy.”

“The past year has been an exciting and transformative one for the village of Barrington,” said Village President Karen Darch. “From achieving home rule status to making major investments in infrastructure and hosting successful events and initiatives, Barrington continues to demonstrate its commitment to creating a vibrant community for all.”

On Nov. 8, Barrington voters cast ballots in favor of home rule status. Then in December, village trustees approved the town’s first 1% home rule sales tax, which is effective July 1, with plans to use the funds for infrastructure improvements across the village.

It was also a significant year of development for Barrington School District 220.

Maintenance, repairs, security and safety upgrades took place at each school, along with new classroom additions to replace the former mobile classrooms at Prairie, Station and Grove, plus dedicated STEM and sensory rooms were added at each elementary school, along with a new playground at Sunny Hill, according to the district. Additional work is planned at Barrington High School. Build 220 is funded by a $147 million bond referendum approved by Barrington area voters in March 2020.

“The village continued its progress toward major public-private reinvestment in 2022, with signature development and infrastructure projects such as the Clove and the Weiland and Lake Cook Road improvements,” said Village Manager Dane Bragg. “Buffalo Grove looks forward to another great year of improvements in 2023 as we continue our Infrastructure Modernization Program, transition to the new public works facility and welcome new development to our community.”

Considered the largest redevelopment project in the history of Buffalo Grove, The Clove broke ground Sept. 22 on the former site of the Buffalo Grove Town Center. The $150 million project has been four years in the making and will include a residential, commercial and entertainment area set on 22 acres at Lake Cook and McHenry roads.

Another building transformation took place at The Arboretum Club, 401 Half Day Road. WJ Golf LLC designed a new indoor simulator golf facility in the former banquet space and opened a bar and Asian fusion restaurant. Eight indoor golf simulator bays feature 160 golf courses from around the world plus six gaming machines were added to the club.

In May, the Village Board approved the $13 million purchase and remodel of a former warehouse space at 1650 Leider Lane for a new Public Works Department facility, which officials say will better serve the needs of the growing community.

Sadly, as the year came to a close, a family of five was found dead in their Buffalo Grove home. Andrei Kisliak, 39, is alleged to have killed his wife, Vera Kisliak, 36, two daughters, Vivian, 6, and Amilia, 4, and his mother Lilia Kisliak, 67, before killing himself, according to Buffalo Grove police Chief Brian Budds.

Autopsies by the Lake County coroner indicated the cause of death for all the family members to be from “sharp force injuries.”

The Kisliak family faced a home foreclosure, and the couple was in the throes of a contentious, ongoing divorce, according to court records.

The village of Lake Zurich continues to attract new developments along the Rand Road corridor.

In September, the 25,283-square-foot Life Time fitness facility and luxury spa at 400 N. Rand Road opened to the public.

Across the street, construction is underway for the Sanctuary of Lake Zurich. The LZ Development Group LLC is constructing a mixed-use development with 23 residential townhomes in three buildings with large windows overlooking the Lake Zurich waterfront, at 300 N. Rand Road. The development is expected to also include a 4,200-square-foot commercial building.

Also on Rand Road, the former Giordano’s pizza restaurant, at 455 S. Rand Road, will be leveled to make way for a new Chase Bank building, consolidating operations from the Chase Cuba Road location and the bank across the street from the new site.

Just down the street, village leaders cut ribbons in October on a Casey’s General Store at 650 S. Rand Road, which not only sells gas but made-from-scratch pizza and more.

Village Manager Ray Keller said the village also saw redevelopment on Main Street this past year, thanks to village investments.

Keller said the village ended the year in a positive financial position, with a budget surplus and $1.8 million set aside for larger infrastructure projects in 2023. This past year, he said, the village invested $1.9 million in road resurfacing in June Terrance and the Braemar neighborhood plus $3.4 million in water main replacements and lining sanitary sewers to efficiently extend their lifespans.

The village also completed improvements at Paulus Park including a new stage, shoreline stabilization and a kayak/canoe launch, along with accelerated replacement of trees removed in 2016 due to the EAB infestation.

The weekly Block A Food Truck Social at the Lake Zurich Promenade continued to draw crowds this year as did the annual Lake Zurich Lion’s Club Alpine Fest, Rock the Block and Miracle on Main—among 40 special events hosted by the village this past year.

“Each year has presented a new challenge, through tight revenues, COVID, labor and supply chain disruptions, to the inflationary pressures that will shape 2023,” Keller said. “Lake Zurich is resourceful and resilient – we’ll adapt to whatever the new year brings, while remaining focused on what we can do next to make Lake Zurich even better.”

Elizabeth Owens-Schiele is a freelancer.