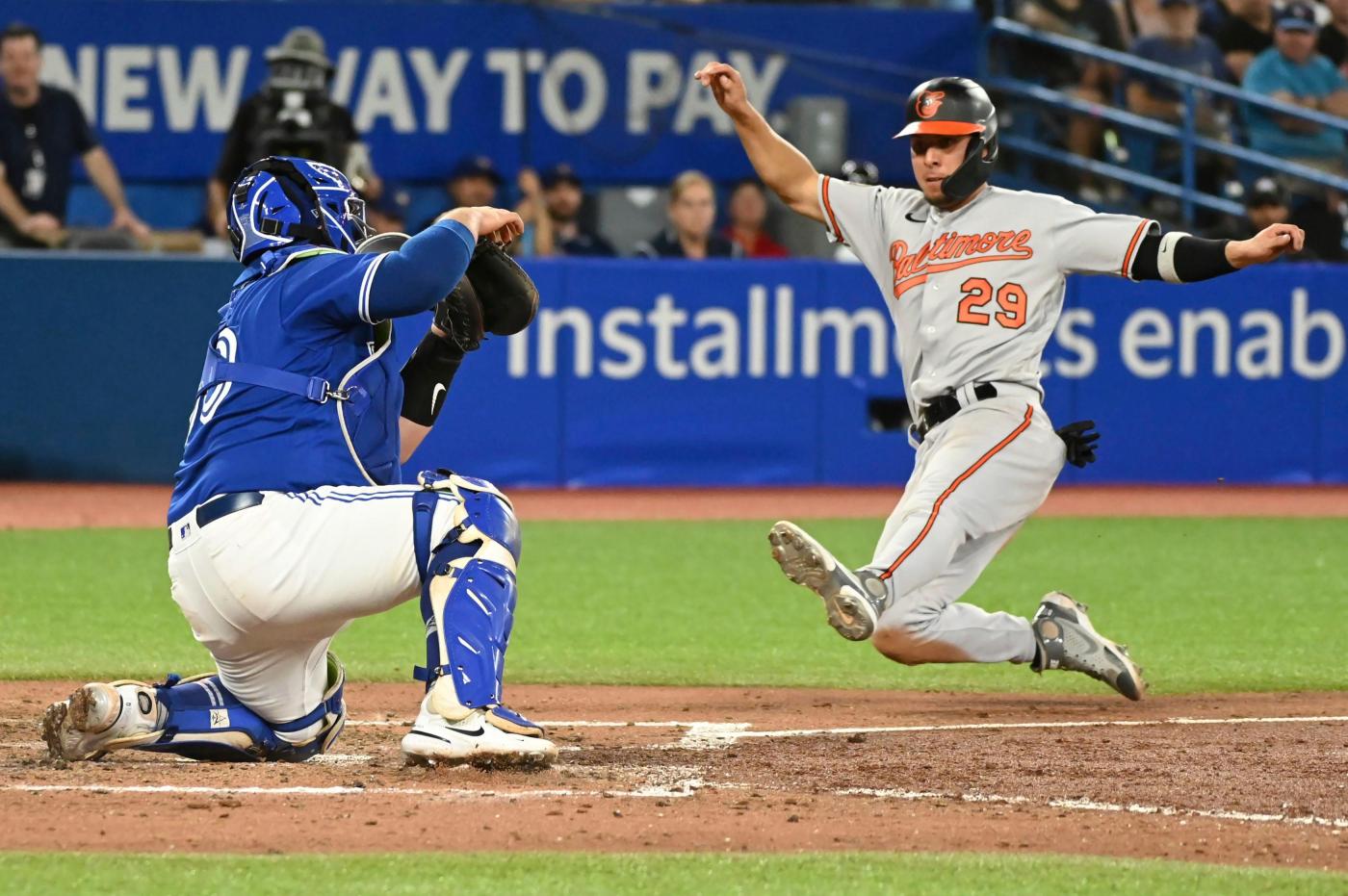 Mike Elias and Brandon Hyde have in recent days wondered whether Adley Rutschman truly understands the impact he’s had since arriving in Baltimore in May. Hyde, the Orioles’ manager, took a moment Friday in the team’s dining room to joke with him that it’s not common for a young player to catch consecutive shutouts on the road against a first-place club, as Rutschman did last week in Cleveland.

Having chosen Rutschman No. 1 overall with his first draft pick as Baltimore’s executive vice president and general manager, Elias remarked the club was aware of his transformative nature after scouting his makeup at Oregon State, then marveled at his ability to not only handle that perception but live up to it.

Between the 2018 season that gave the Orioles the opportunity to select Rutschman atop the 2019 draft and his major league debut more than three months ago, Baltimore won fewer than a third of its games. With Rutschman on the roster, the Orioles’ winning percentage is nearly 60% as they have become a surprising playoff contender.

“I wonder what this feels like from his vantage point, where he just shows up and we start winning,” Elias said with a hearty laugh. “I wonder if he’s like, ‘What was all the fuss about?’”

Rutschman already has an argument as one of the best catchers in baseball — on both sides of the ball — and is a front-runner for American League Rookie of the Year. Asked what has changed about his team between its slow start and ascension to contention, Hyde is not shy to acknowledge the turning point that was Rutschman’s debut, noting his “off-the-charts” defense and premier strike-zone discipline.

“We’re watching a young player that is gonna be really special,” Hyde said. “He hasn’t even, for me, tapped into the kind of … When he starts piling up at-bats, it’s going to be pretty scary how good he’s gonna be.”

Rutschman is not alone in being a 2019 draftee making an impact in Baltimore. Last week, the Orioles’ second-round selection, infielder Gunnar Henderson, reached the majors, joining Rutschman as the second No. 1 prospect in baseball they have brought up this year. With outfielder Kyle Stowers added to the roster in August, each of Elias’ first three draftees with the Orioles are helping an unexpected playoff push.

“It’s really exciting right now just to be a part of this,” Rutschman said.

It makes 2019 the first draft the Orioles’ first three picks have reached Baltimore since 2008, and the trio starting together as part of Saturday’s lineup against Oakland marked a franchise first.

“This is exactly what healthy organizations look like in terms of developing players and getting them to the big-league level,” director of draft operations Brad Ciolek said. “Obviously, no one saw this turnaround coming, and having those guys that were ultimately the top three guys in that first draft together being key cogs in the machine that is our major league team down the stretch here is very exciting and gratifying.”

After Elias joined the Orioles, Ciolek was retained from the previous front office as interim scouting director. Ciolek saw his role as working to implement Elias’ vision in terms of players they should target. A tidal wave of newly available information, the product of an analytical draft model Elias credited to assistant general manager Sig Mejdal and senior data scientist Michael Weis, helped the process, even as Ciolek’s scouting department adjusted to its integration.

That pre-draft process featuring “a lot of new, overlapping infrastructure,” as Elias put it, makes the feat of the Orioles’ first three picks becoming major leaguers — and two of them in Rutschman and Henderson becoming the game’s top prospect — all the more impressive.

“To see these guys kind of create a beachhead, so to speak, for the Orioles’ drafted talent on the major league roster and on a winning team, I can’t imagine a better outcome so far for the 2019 draft,” Elias said.

“I’ve been doing drafts since 2007, and it’s pretty special, I think, to have three players, especially the first three picks in the draft, all be in the lineup at the same time. Not something I would take for granted.”

The players don’t either. Stowers, a Stanford product taken with a competitive balance pick between the second and third rounds, played against Rutschman in college and had no familiarity with Henderson, a prep player from a small Alabama school. But now, he’s played alongside them regularly, calling the pair drafted ahead of him in Baltimore’s 2019 class “two of probably the most talented people I’ve ever played with.” Henderson said Rutschman and Stowers “guided me on the way up here,” teaching him to not weigh one at-bat or game too heavily.

That they’ve all bonded and become good friends over the past three years in the Orioles’ system means sharing the clubhouse at Camden Yards is even more celebratory.

“Man, it’s really special,” Stowers said. “Obviously pretty cool that we were the first picks with the new regime and front office, but then also, I think pretty cool just to see how close we’ve all gotten since that time.

“We’ve seen all of us grow as baseball players and people, and I feel like we’ve all come a long way and still have a long way to go.”

The largest growth process belongs to Henderson, with Elias earlier this year calling him a “flagship” of the organization’s player development program. He entered this year a well-regarded prospect ranked among the top 100 in the sport, but as a 20-year-old, he dominated Double-A Bowie to earn a quick promotion to Triple-A Norfolk, then within the span of about a week, he hit for the cycle, turned 21 and represented the Orioles in the All-Star Futures Game amid a stretch that propelled him to the top of multiple entities’ prospect rankings.

Elias recalled seeing mocks that had Henderson going among the first 15 picks in the months ahead of the 2019 draft, while both Baseball America and MLB Pipeline had him pegged as a first-round selection based on their respective rankings. But as the Orioles’ second choice at No. 42 overall approached and Henderson remained on the board, Elias called his representation to see whether he would be willing to forgo his commitment to Auburn if taken there.

Having worked as the Houston Astros’ scouting director before taking over Baltimore’s baseball operations department, Elias had attended events Henderson participated in the summer before his senior season and was familiar with his standout defense and bat-to-ball skills. Ciolek noted how in that spring, Henderson took “a leap” in all aspects of his game, a trait that has proven significant in following drafts when it comes to how the Orioles evaluate high school players.

“When you talk about getting your player development department someone that they can mold and potentially turn into a prominent big-league player,” Ciolek said, “Gunnar was that type of prospect.”

Ciolek prides himself on how the Orioles involve their minor league coaches and other player development staff in the club’s pre-draft process, helping to streamline introducing players to the organization’s practices once they officially join it. Having Rutschman, Henderson and Stowers in the majors reflects well not only on the scouting department but the coaches in the system who helped them get there, with Elias highlighting minor league hitting coordinator Anthony Villa’s work with Henderson in particular. He also was sure to point out their relatively quick arrivals came despite a lost minor league season in 2020 because of the coronavirus pandemic.

“For us to be successful — Mike has mentioned it consistently — we have to develop from within, our guys that we take have to move quickly, and getting those coaches involved, working with our scouts and vice versa, it more or less kind of creates buy-in the moment that they set foot in Sarasota, [Florida,]” Ciolek said. “Our coaches already have an idea of, ‘OK, these are some things that we can work on to get the full potential out of these players.’”

It also bodes well for the possible success of those who have and will come after the three big leaguers as Orioles’ draftees. Other members of that 2019 class, such as infielders Joey Ortiz and Darell Hernaiz, have had impressive seasons. Baltimore has had strong results from its second picks — Jordan Westburg, Connor Norby and Dylan Beavers — in the three subsequent drafts.

Having the No. 1 pick to spend on Rutschman worked well, but the arrivals of Henderson and Stowers, with possibly others on the way, show the organization should be able to continue to find and develop impact players as their playoff pursuits mean they’ll drift later into the draft in the coming years.

“That’s where I like to be because it means that your organization is healthy,” Elias said. “I will celebrate the day when we’re picking consistently in the 20s.”

A week that could determine the Orioles’ season. They enter a four-game series against the Toronto Blue Jays trailing their American League East foe by 2 1/2 games for the AL’s last playoff spot. Unless Baltimore sweeps, it will enter its weekend series against the Boston Red Sox not among the wild-card teams. But a good showing in this division-heavy stretch could position the Orioles well going into the final 3 1/2 weeks of the season while firmly knocking Boston out of the playoff picture.

Perhaps the most notable number of the past week to suggest Ryan Mountcastle might be breaking out of his summer swoon? The streaky first baseman struck out only twice, the latter coming in Sunday’s 0-for-4 showing that still left him with a .300 average and an OPS of 1.098 for the week. Mountcastle struck out in nearly half of his plate appearances the previous week and more than a quarter of them before this week.

Hyde said pinch-hitting Rutschman for Austin Hays late in Friday’s victory against Oakland wasn’t “because you don’t want to see [Hays] hit,” but rather to create a more favorable matchup. In the 17 at-bats Hays did take last week, he recorded two hits and has now hit .207/.257/.350 since hitting for the cycle in late June left him with a batting line of .287/.347/.482 and a potential All-Star case. He’s had a knack for playing at his best in September, and this year, both he and the Orioles need it.

Grayson Rodriguez’s start for High-A Aberdeen on Thursday at least wiggled the knob of the door to a potential major league debut this season, even if it lasted only 31 pitches. The top pitching prospect in baseball will start for Bowie on Tuesday, making a typical starter’s five-day turn. A start Sunday, then, would be the first of four more he could make before the Triple-A season ended, with a fifth possibly available in the majors should he be stretched out and perform well enough in Norfolk as the Orioles hunt a postseason berth.