Todays Though > News > As Baltimore adds to future through draft, strong first half comes with elite young talent on the way – Boston Herald
News

As Baltimore adds to future through draft, strong first half comes with elite young talent on the way – Boston Herald 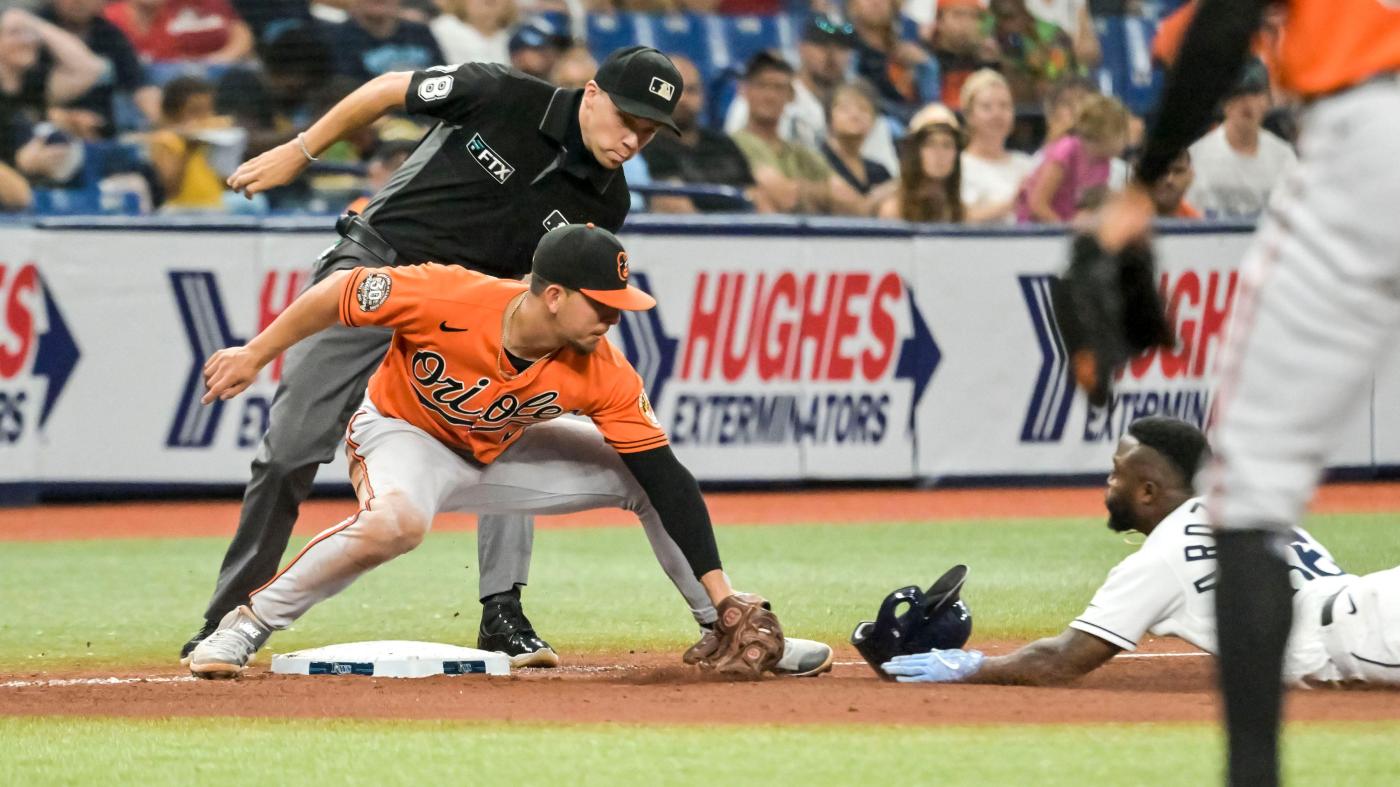 In Matt Holliday’s one season with the New York Yankees in 2017, his oldest son, Jackson, came with his dad and the team to Baltimore, shagging fly balls in the outfield during batting practice at Camden Yards.

Jackson Holliday shared that story Sunday night after the Orioles made him the first overall pick in the 2022 draft. The experience makes him one of executive vice president and general manager Mike Elias’ few picks who have taken the field at Oriole Park.

Holliday’s selection came hours after the Orioles closed the first half of their season with a surprising .500 record. That mark came with Adley Rutschman, drafted first overall three years ago, being the only of Elias’ draftees to play in front of Baltimore’s home fans.

“Kind of be in the atmosphere, and it’s something that that I still remember, and I’m very excited to get back to that point,” Holliday said. “They’re a great organization, and they’re heading in the right direction and I’m excited to be a part of it, so I couldn’t be more excited to be in the organization.”

Many of the players who have contributed to Baltimore’s turnaround are homegrown, with the core of their lineup in Ryan Mountcastle, Cedric Mullins, Austin Hays and Trey Mancini all being Orioles draftees before Elias took over baseball operations in November 2018. But since he arrived, Elias’ work has turned Baltimore’s farm system into one of the best in the sport, with the Orioles’ major league successes this year largely not including players selected during his tenure.

With Rutschman being the first player taken in Elias’ first draft, he was a logical first player to arrive. Only Kyle Stowers, chosen with a competitive balance pick later that same year, has also reached the majors, playing in Toronto as a substitute player without being added to the team’s 40-man roster. He is joined by Gunnar Henderson — selected between Rutschman and Stowers — and Jordan Westburg as potential Elias draftees who could join the Orioles and Rutschman in the second half as the club tries to build on that even record, which Elias called “a pretty significant mile marker for us.”

“I think that’s a step, and now we’re adding what’s going to be a big new wave to the bottom of what is an excellent farm system,” Elias said shortly after drafting Holliday. “I think that this Orioles organization is in the healthiest spot it’s been in a very long time, and it just got a lot healthier 20 minutes ago.”

Elias said Holliday has “a good chance to move efficiently through the minors and join this group that we see,” with nine of Baltimore’s top 10 prospects at Double-A or higher. Rutschman’s arrival has already signaled the potential impact of this wave, with the Orioles going 30-22 since he made his debut May 21.

It’s not clear how the Orioles will approach the trade deadline, but their biggest additions of the second half might prove to be the other draftees from this front office — not to mention holdover pitcher DL Hall, who is in Triple-A — they add to their big league roster.

They would certainly be welcome, with Baltimore’s improved major league record still not enough to get them out of the bottom of the American League East. The division’s other four teams — the New York Yankees, Tampa Bay Rays, Toronto Blue Jays and Boston Red Sox — enter the second half prepared for a playoff push.

But the Orioles have shown, even without the products of draft classes they consider successes contributing in the majors, they’re heading in the right direction.

“Obviously, we’re not going to be complacent,” the Orioles’ director of draft operations Brad Ciolek said before the draft. “We realize that we are in the American League East, it’s going to be a dogfight every single night, whether it’s Tampa, Toronto and obviously Boston and the Yankees, but thus far, and granted you don’t want to get to highs on the highs, lows on the lows, but fairly happy with how things have turned out.”

It’s the All-Star break, with the final 18 rounds of the draft coming Monday and Tuesday. Closer Jorge López will represent Baltimore in the Midsummer Classic on Tuesday at Dodger Stadium.

Play resumes Friday, with the Orioles continuing a divisional stretch with three games against the New York Yankees at Camden Yards.

Third baseman Ramón Urías’ return to the Orioles’ lineup has greatly deepened it, and he went deep plenty himself.

Urías hit .421 on the week with five of his eight hits going for extra bases, including three pull-side home runs. He credited an improvement in his launch angle for his power surge, as he’s been hitting the ball hard all year. Urías trails only Mountcastle among Orioles in average exit velocity, with his 90.8 mph mark entering Sunday tied with former Orioles third baseman Manny Machado and ranking in the top 20% of qualified hitters, according to Baseball Savant.

The Orioles’ continued struggles at Tampa Bay’s Tropicana Field are a cause for concern, though they have only one visit left there. Friday’s defeat ended Baltimore’s 10-game winning streak, while Sunday’s represented its 14th straight series loss in St. Petersburg, Florida, dating to June 2017.

The series loss left the Orioles five games under .500 against division opponents, compared to five games over against teams outside of it.

Hall continued his incredibly dominant July for Triple-A Norfolk on Sunday, striking out 10 over five scoreless innings. In four starts this month, he has struck out half of the batters he has faced and five times as many as he’s walked. He’s allowed one earned run in 20 2/3 innings, a 0.44 ERA.