Todays Though > News > As injuries at QB mount, evolving Ravens find a way to hold off Steelers, 16-14 – Boston Herald
News

As injuries at QB mount, evolving Ravens find a way to hold off Steelers, 16-14 – Boston Herald 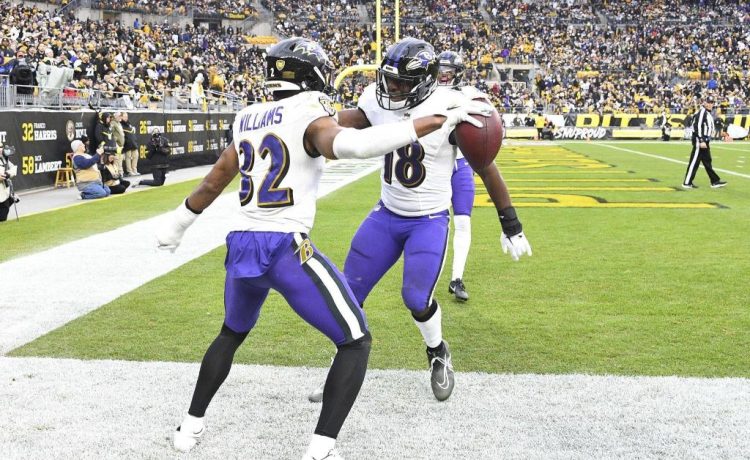 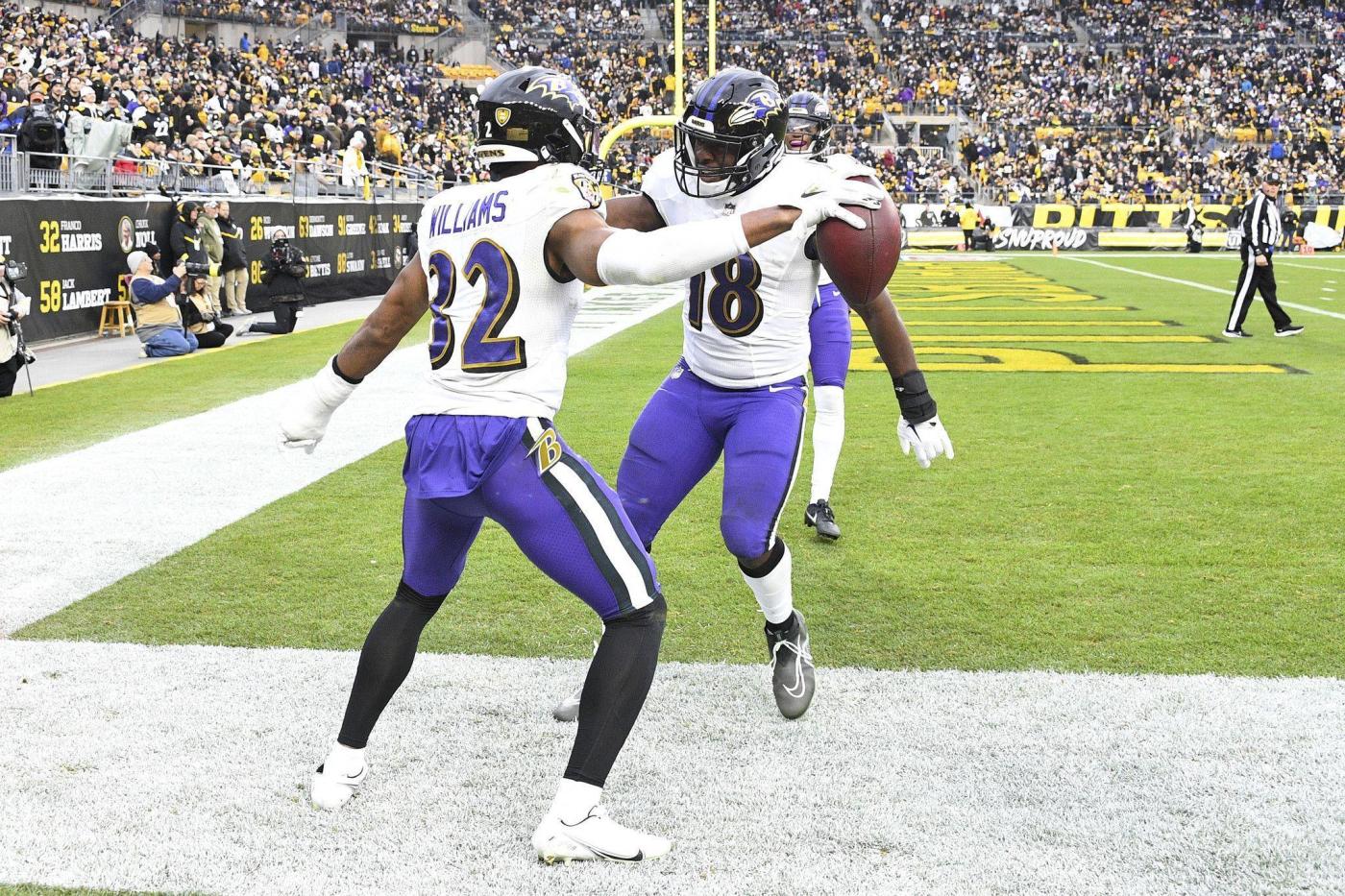 The cheers inside the visiting locker room rang out late, one after another, booming from the bowels of Acrisure Stadium, as if every Raven inside were at full throat.

The old saying around the team facility is that you don’t become a Raven until you beat the Steelers. On Sunday, the Ravens had won, finally, for the first time since 2019, their 16-14 win over Pittsburgh as remarkable for who was still standing — for those hearing those huzzahs and getting those back slaps — as for who was not.

One game ball went to third-string quarterback Anthony Brown, the undrafted rookie forced into action in the third quarter after another injury at the position. Another went to running back J.K. Dobbins, who hadn’t played since an October operation. Defensive lineman Calais Campbell was asked about a special teams play before he was asked about the defense.

A year ago, the Ravens’ late-season collapse had started here because, in the fourth quarter, a depleted team and its star quarterback did not have enough. On Sunday, the Ravens did not have even their backup quarterback available as the clock wound down. And still they made it to the finish line.

“I’m very proud of the guys,” coach John Harbaugh said after ending a four-game losing streak to Pittsburgh. “I think it’s the kind of victory that you can attribute to heart and character and toughness and finding a way to get the job done and never giving up and never flinching and having each other’s back in the end.”

He added: “A lot of guys stepped up.”

These Ravens (9-4) are learning as they go — learning how to win late, learning how to play with teammates new and old, learning the joys of quieting a rowdy Pittsburgh (5-8) crowd. Sometimes the lessons have been painfully absorbed; if not for a 28-27 loss to the Jacksonville Jaguars in Week 12, the Ravens might be 10-3, riding a seven-game winning streak and alone atop the AFC North.

But this team has not let adversity become an adversary. A week ago, quarterback Tyler Huntley replaced an injured Lamar Jackson and led a last-minute touchdown drive to squeak past the Denver Broncos, 10-9. On Sunday, Huntley (8-for-12 for 88 yards, nine carries for 31 yards) left the game midway through the third quarter with a possible concussion after a crunching hit by safety Minkah Fitzpatrick. The Ravens led 13-7 then. The field goal they managed without him — with Brown, making his NFL debut — proved the difference in their two-point win.

“No other way I’d rather have it,” said inside linebacker Roquan Smith, who had one of three red-zone interceptions for an opportunistic Ravens defense. “Fought a lot of adversity throughout the game. But that’s what makes everyone special, and how you respond once you face it. And we faced it. No other way of winning that, and it was in Ravens fashion. So I’m just happy to be here.”

Even with the uncertainty over Jackson’s injured knee — Harbaugh indicated Sunday that Huntley, if he clears concussion protocol, is expected to start again Saturday against the Cleveland Browns — the Ravens have given themselves some margin for error.

After losses by the Las Vegas Raiders on Thursday and the New York Jets on Sunday, the Ravens have a 99% chance of making the playoffs, according to FiveThirtyEight’s postseason odds. They also have a more favorable end-of-season schedule than the streaking Bengals, who kept pace in the division race with a win over the Cleveland Browns.

If a top-four seed in the AFC comes down to the Ravens’ regular-season finale in Cincinnati, they will need Jackson healthy and humming. But their new and renewed difference-makers could make all the difference, too.

Could it be Dobbins? The last time he’d gotten a meaningful touch, almost two months ago, he was finishing off an abbreviated seven-carry, 15-yard showing in a 24-20 loss to the New York Giants. His surgically repaired knee wasn’t feeling right. From arthroscopic surgery, though, Dobbins emerged with burst and purpose. He rushed 15 times for a season-high 120 yards (8 yards per carry) and a touchdown Sunday, the second most of his career, powering a resurgent ground game that finished with 42 carries for 215 yards (5.1 per carry).

“It’s still not me all the way yet,” said Dobbins, who had five carries for 29 yards on a crucial 13-play, 57-yard field goal drive late in the fourth quarter that knocked nearly eight minutes off the clock and gave the Ravens a 16-7 lead. “I’m going to continue to get better, and hopefully those 100-yard games will start turning into 200-yard games, maybe. I’m just going to keep getting healthier, and like I said, I’m going to keep getting better. I got the 100-yard game [today], and I’m just going to keep stacking on that.”

Could Smith make the difference? He finished with a team-high-tying six tackles, helping to bottle up another ground game. The Steelers finished with 20 carries for 65 yards (3.3 per carry), the sixth straight offense the Ravens have held under 90 yards.

Smith, on the defense for five of those games, kick-started the Ravens’ turnover spree with a second-quarter interception, picking off a pass over the middle from Steelers backup Mitchell Trubisky. His former Chicago Bears teammate was in only because rookie Kenny Pickett had been ruled out, mired in concussion protocol after Smith threw him to the ground on a first-quarter sack.

The Ravens’ shutdown pass defense was not contagious — Trubisky finished 22-for-30 for 276 yards and a touchdown, often targeting top cornerback Marlon Humphrey in coverage — but the turnovers were. Fellow inside linebacker Patrick Queen one-upped Smith’s pick five minutes later, making a leaping, full-extension grab to end another Pittsburgh drive not far from the end zone.

Could Marcus Williams make the difference? The safety and big-ticket free-agent signing, sidelined since Week 5 by a wrist injury, introduced himself to the rivalry with a third-quarter interception, Trubisky’s third of the day.

Every series on Sunday, it was seemingly someone new.

An old star like Campbell? He blocked a 40-yard field goal attempt by kicker Chris Boswell to preserve the Ravens’ 13-7 lead in the fourth quarter.

A young piece like Gus Edwards? The running back rushed 13 times for 66 yards, including a 6-yard run on third-and-3 that extinguished the Steelers’ comeback hopes after a late touchdown.

A star returning from injury like Ronnie Stanley? The left tackle seemed to cover as much ground as the running backs, pulling and climbing to the second level on block after block.

A no-name like Brown? Pressed into duty at the Ravens’ 1-yard line after Williams’ interception, he avoided trouble. Later, early in the Ravens’ time-draining fourth-quarter drive, he stared down a third-down blitz to find tight end Mark Andrews for a first-down connection.

Help was abundant and timely. The Ravens got sound blocking from seldom-used guard Ben Cleveland and center-turned-guard Trystan Colon. They got a record-breaking field goal from kicker Justin Tucker, now the Ravens’ all-time leading scorer, plus two more. They got just enough out of their 309 total yards and 33 minutes of possession.

“I’m sure there are a lot of small things we did really well,” Harbaugh said. “I think we stuck together. I think that’s what we did; we did it together. That was probably the No. 1 thing.”

With that, Harbaugh stepped away from his podium and hurried back to the locker room, almost eager to rejoin the revelry. The Ravens’ flight back home would be short, but sweet.