As Justin Fields joins an exclusive QB fraternity, the Chicago Bears stumble through another day of execution errors – Boston Herald 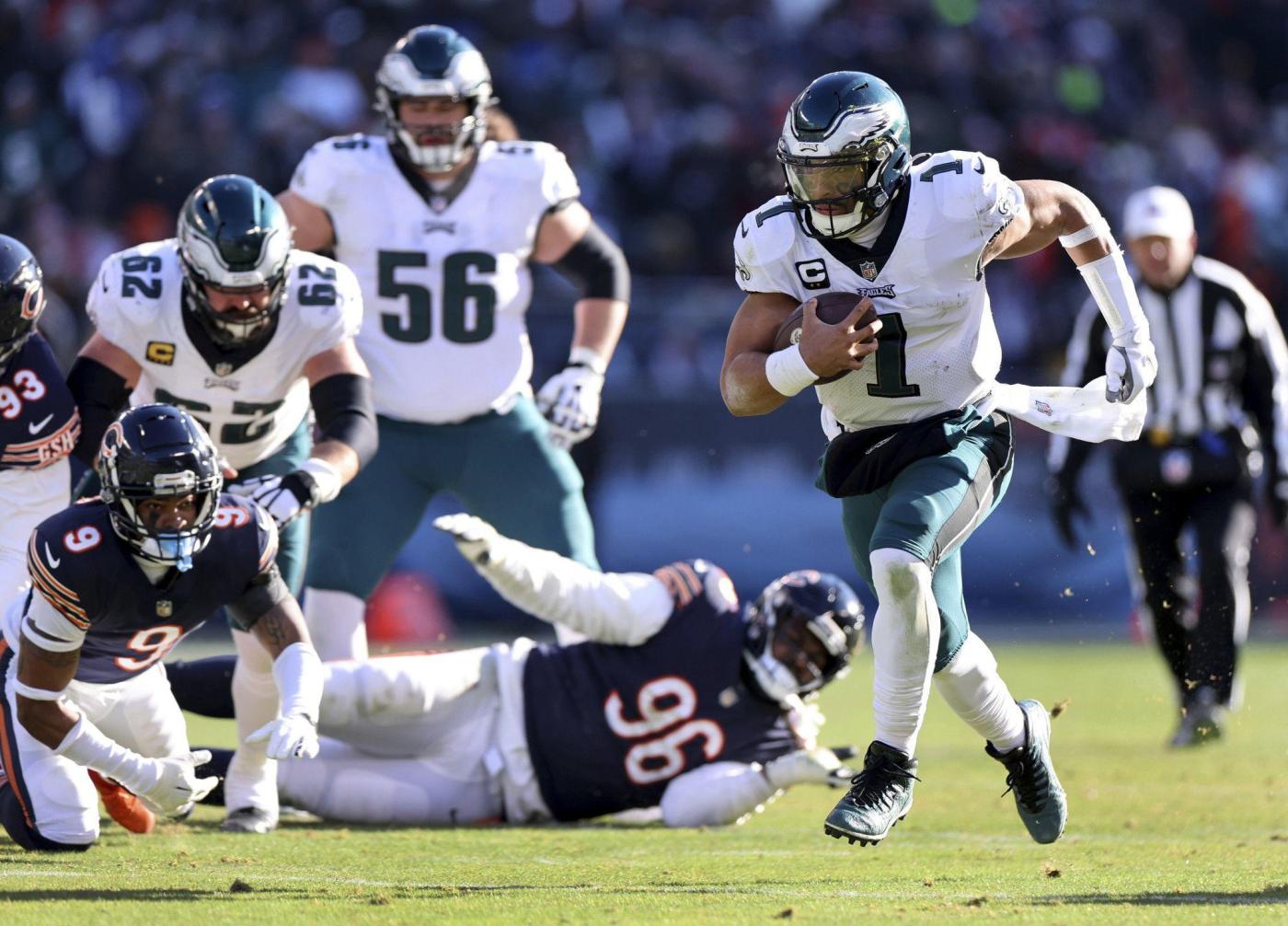 Maybe, for some, Sunday’s final score will provide needed comfort.

The struggling and increasingly undermanned Chicago Bears hanging within five points of the NFC favorite Philadelphia Eagles in a late-season battle at Soldier Field? That seems to offer at least some evidence that first-year coach Matt Eberflus is keeping his team focused and competitive down the stretch of a last-place season, right?

“It’s about championship habits,” Eberflus said not long after his team suffered its seventh consecutive loss, this one by a 25-20 count. “I put that in front of our guys every week. It doesn’t matter, win, lose or draw, we want to see championship habits from the individual.”

There will be brighter days ahead, won’t there? Something is being established this season, correct?

“Everybody has to go through this,” Eberflus said. “We’re in the process of doing that right now. To me, it’s more about the work habits of each guy and the work habits of the units and having those championship work habits. That, to me, is the most important thing. Because that’s what you can stand on.”

The Bears also have Justin Fields as their quarterback, which has provided Chicago with an intoxicating mixture of excitement and hope this season. Fields added to his 2022 highlight reel with another jaw-dropping explosive run, this one a 39-yard scramble that turned second-and-27 near midfield into first-and-goal at the 9 in the second quarter. Of course.

Fields seemed dead on that play, grabbed around the shoulder by linebacker Haason Reddick 3 yards behind the line of scrimmage. But then, as he often seems to do, Fields slithered free, found the open field and activated the jets. Had it not been for his right foot scraping the sideline paint just inside the 10, it would have been another touchdown.

“I was celebrating,” Fields said. “Spiking the ball. I didn’t know (I stepped out).”

Instead, on the next snap, David Montgomery ran for a 9-yard touchdown and a 6-3 lead. And in the fourth quarter, after already establishing himself as the single-season franchise record holder for rushing yards by a quarterback, Fields entered the exclusive 1,000-yard fraternity occupied by only two other NFL quarterbacks: Michael Vick and Lamar Jackson.

That was another cool and well-deserved achievement in another loss.

Added Fields: “It’s an honor. It’s a blessing from God.”

The Bears defense also had its moments, holding the Eagles scoreless in the first quarter and creating three takeaways with first-half interceptions by Kyler Gordon and DeAndre Houston-Carson and a third-quarter fumble recovery by Gordon.

But like so much of the season, those glimmers of hope were offset by significant missteps, breakdowns and health setbacks. The inventory of all that went wrong for the Bears on Sunday felt unsettling.

Already without Darnell Mooney (on injured reserve since Week 12) and with Chase Claypool (knee) declared out, the Bears made N’Keal Harry inactive with a back issue and then lost Equanimeous St. Brown to a concussion after the third play.

That left Fields and the offense without four of the top six receivers. So it wasn’t much surprise that a fast, aggressive and opportunistic Eagles defense held the Bears to 91 net passing yards, the ninth time in 14 games the Bears failed to top 150.

After St. Brown’s exit, the injury bug kept biting. Linebacker Jack Sanborn hurt his left ankle in the third quarter and never returned, and cornerback Jaylon Johnson (ribs) left the game in the final six minutes. Most notably, right guard Teven Jenkins had to be strapped to a backboard, carted off the field and taken to a nearby hospital for evaluation of a neck injury he suffered in the first quarter.

Thankfully, Eberflus said after the game, Jenkins remained responsive and had promising movement.

Execution problems also doomed the Bears through much of the afternoon. A sampling:

“I don’t like that,” Eberflus said. “I don’t like it. I don’t like when guys lose the football. It’s not good. … When you’re in traffic, you have to have five points of pressure on the ball and put your clasp hand over your other hand.”

“That was a tough one,” Houston-Carson said.

Added Eberflus: “We should have had that dead to rights. That’s unfortunate that that happened.”

A botched read-option exchange between Fields and rookie Trestan Ebner resulted in a fumble and a loss of 6 yards. Then a protection breakdown created a 10-yard sack. Rather than try a 48-yard field goal into a stiff 16 mph breeze, Eberflus sent out his punt team with Santos communicating that his maximum range kicking south was 45 yards.

“That’s the way the wind was out there today,” Eberflus said. “It was tough sledding. … We’ve got to score touchdowns there. That’s how you put teams away. And you create momentum that way. It’s something we have to learn to do as a football team.”

All of those moments indicate how far the Bears are from becoming a championship-contending team. In their present state, with well-documented deficiencies in talent and depth, their execution isn’t nearly sharp enough to produce winning efforts consistently. Sunday marked the 56th day that passed since they last recorded a victory. That slog is getting old.

For many Bears fans, though, the fast-forward button — to a hope-filled roster replenishing cycle during free agency and the draft next spring — offers dreams that the team will quickly and conveniently fix its inconsistent offensive line, bottom-tier receiving corps and leaky defense and be right in the playoff mix a year from now. Yet so much would have to go right for that to become reality. And Sunday offered another reminder of how often things tend to go wrong for the Bears.

Eberflus expressed a similar sentiment, convinced his 11-loss team is simply absorbing the bumps and bruises and tough-to-stomach lessons so many teams endure on their climb toward success.

Take Eberflus’ word for that if you want. Or feel free to draw any other conclusion you see fit. The future seems destined to be brighter.

But a lot of that is because, in the present, the Bears remain a last-place team with a long list of major weaknesses and a ton of heavy lifting ahead.