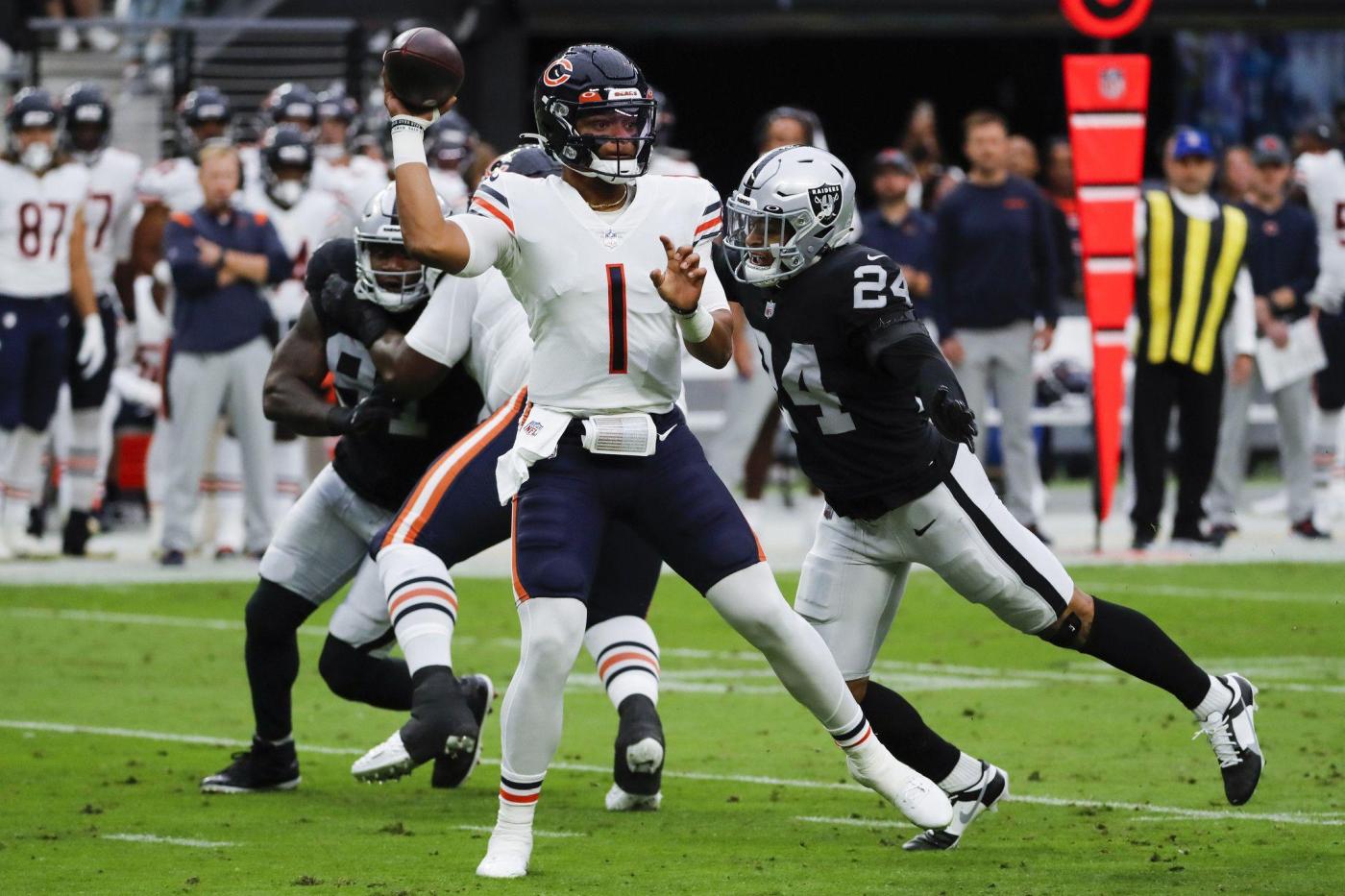 The most interesting seat at Mercedes-Benz Stadium this weekend might be the one next to former Chicago Bears general manager Ryan Pace.

After the Bears fired Pace in January, he landed as a senior personnel executive with the Atlanta Falcons. The Bears team he will watch play the Falcons on Sunday is largely different than the one he built while going 48-65 over seven seasons in Chicago.

New Bears GM Ryan Poles has turned over about two-thirds of the roster in less than a year, most notably shedding some of the biggest defensive stars of the Pace era — Khalil Mack, Roquan Smith, Akiem Hicks, Robert Quinn and Danny Trevathan.

And yet the Bears’ most significant player, the one who has Chicago buzzing with what fans hope is the start of a major breakout, joined the Bears because Pace traded up from No. 20 to 11 to draft him in 2021.

Quarterback Justin Fields arrives in his home state off a string of record-setting rushing performances that have lifted the offense to four straight games of 29 points or more — though three were losses.

Under new coach Matt Eberflus and offensive coordinator Luke Getsy, Fields looks to be finding a level he didn’t reach in his rookie season under former coach Matt Nagy. In 10 games, he has rushed for 749 yards and six touchdowns — including 555 rushing yards and five touchdowns in the last five games — and thrown for 1,489 yards, 12 touchdowns and seven interceptions. The hope is that Fields will build on his recent performances to deliver the type of winning quarterback play Chicago rarely has seen, including during Pace’s tenure.

“I would say it’s pretty amazing,” Eberflus said of what Fields has done the month. “The numbers and the ability to run. And then you see his growth in the passing game. To see all those guys around him starting to jell, with (Darnell) Mooney and Cole (Kmet) really starting to jell around him. It really helps our running game, certainly opens up a lot of windows in the run game as well. It’s exciting.”

Nobody is going to say Pace didn’t get his fair shot.

His tenure included two coaches and multiple swings at obtaining a starting quarterback, including two first-round picks, a trade and two free-agent signings. His miscalculation of drafting Mitch Trubisky at No. 2 in 2017 over Patrick Mahomes was the defining moment of his time in Chicago, and that wasn’t his only first-round pick or signing that didn’t work out. See: Kevin White and Leonard Floyd.

And yet “what ifs” certainly might be dancing around in Pace’s head Sunday as he watches Fields.

What if the Bears had handled Fields differently last season? What if they hadn’t started Andy Dalton at the beginning of what Pace and Nagy likely understood was a must-win year for their careers? What if coaches had adjusted their offense to better utilize Fields’ skills in his rookie year? What if the Bears had an emerging Fields and the type of defense Pace built in the 2018 season in the same season?

That last one is now in the hands of Poles, who in his quest to build the roster his way understandably has blown up Pace’s creation. That has required dumping some of Pace’s big contracts and acquiring some needed draft capital, which occasionally became casualties of Pace’s aggressive trades.

“Probably around training camp, you start looking around and being like, ‘Yeah, this is a different makeup,’ ” said DeAndre Houston-Carson, who has been with the Bears as a standout special teamer and backup safety since 2016.

Go back to the days just before the 2019 opener, one of the peaks of positivity under Pace as the Bears were coming off a 12-4, NFC North-winning season. Only five players from that 2019 opener remain — Houston-Carson and safety Eddie Jackson, running back David Montgomery, left guard Cody Whitehair and long snapper Patrick Scales.

“I haven’t ever seen anything like it,” said Jackson, who is in his sixth season starting for the Bears. “A lot of people don’t understand because they’re new here. But just to be one of the last guys, it’s like, ‘Yo, this is wild.’ You see the whole locker room change. It’s different, but you have to understand it’s a part of it and keep moving forward.”

The changes leave Poles with a whole lot of holes to fill — at pass rusher after the trades of Mack and Quinn, on the defensive line after the departure of Hicks, Eddie Goldman and Bilal Nichols, at linebacker after the trade of Smith. And that’s just the defense. The Bears need upgrades at wide receiver and on the offensive line.

But with Fields showing promise over the last few weeks, there’s hope Poles can build around something Pace always lacked — a quarterback.

And Poles at least has Pace to thank for that.

“That’s what we’ve been asking for for a while — to have an offense that can come out there and consistently put up 30 points a game,” Jackson said. “You just imagine when we get this thing clicking. Watch when we get rolling, we can go on real-deal streaks.

“We know what’s ahead. We’ll call a spade for a spade. We know we’re a young team. We know we’re looking into the future. … We’ve got five, six rookies that are playing on defense. It’s different and everybody is still learning, but when our defense hits our stride, I feel like it’s going to be very special.”

Here’s a look at the more recent departures of some of Pace’s biggest picks and signings.

LB Roquan Smith, 2018 No. 8 pick. Traded to the Baltimore Ravens in October 2022. Has played in one game for the Ravens.

WR Anthony Miller, 2018 No. 51 pick. Traded to the Houston Texans in July 2021. Had six catches last season with the Texans and Steelers. Went on IR with a shoulder injury this year.

OLB Robert Quinn, five-year, $70 million contract. Traded to the Philadelphia Eagles in October 2022. Has played in three games with one quarterback hit with the Eagles.

DL Akiem Hicks, four-year, $48 million contract in second deal with Bears. Left in free agency 2022. Limited to four games with the Tampa Bay Buccaneers because of a foot injury, has two quarterback hits.

CB Kyle Fuller, four-year, $56 million contract in second deal with Bears. (Drafted by previous Bears regime.) Released in March 2021. Played for the Denver Broncos last season and tore his ACL in Week 1 with the Baltimore Ravens this year.

CB Prince Amukamara, three-year, $27 million contract in second deal with Bears. Released in February 2020. Has been with other teams but hasn’t played in a game since.

QB Nick Foles, acquired in trade in 2020. Released in May 2022. Took two snaps in one game with the Indianapolis Colts this season.

LG Kyle Long, four-year, $40 million contract in second deal with Bears. Retired in 2020. Tried to return with the Chiefs but didn’t play in a game.

RB Tarik Cohen, three-year, $17.25 million contract in second deal with Bears. Released in 2022. Hasn’t played in a game this season.