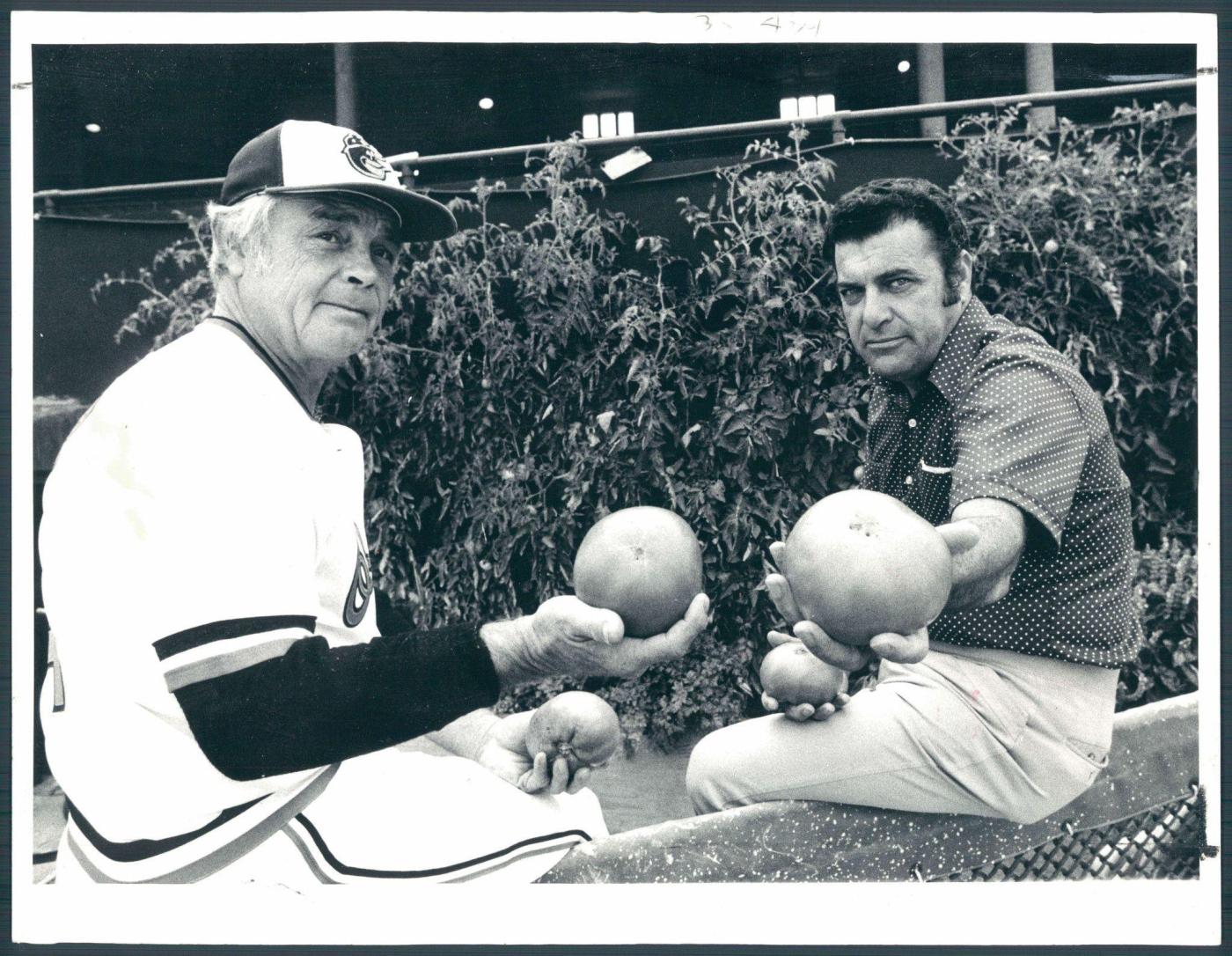 As the Orioles relievers line up by the home bullpen, watching the starting pitcher finish his warmup, there’s time for their attention to wander. They know in a few moments they’ll partake in a daily handshake line, but in the minutes before then, a great green stalk catches their focus.

It was a midseason addition, one that took the bullpen arms by surprise. One day, there it was — a tomato plant. Over the course of the season, the plant has grown taller and the vine-ripened tomatoes have grown fatter. And each day, those relievers log the development of Mother Nature.

“We take a gander to see what the progress is on the tomatoes,” right-hander Bryan Baker said.

The story behind the tomato plant hasn’t infiltrated the bullpen yet. They appreciate its presence — Baker joked that they “should get a garden going out there” — but the historical significance of that plant remained a mystery.

“I was gonna ask you,” right-hander Joey Krehbiel said when asked whether he knew the story of how a tomato plant began growing in the bullpen. “I think it has something to do with good luck?”

Not quite, although perhaps there’s something to that, as a bullpen full of waiver claims has turned into one of the most dependable in Major League Baseball. The origin extends far before any current Orioles reliever was born, back when the competitive spirit of manager Earl Weaver met the expertise of groundskeeper Pasquale “Pat” Santarone in the 1960s.

Now, all these years later, the tomato plant has returned to a Baltimore baseball stadium for the first time since Santarone retired in 1991 — shortly before Camden Yards opened. In the intermediary time, head groundskeepers had stayed away from introducing tomato plants to Camden Yards, and Nicole Sherry, whom the Orioles declined to make available for this story, was no different.

But when she noticed the plants that had originally grown in the bullpen area needed replacing, Rob Doetsch, the captain of the tarp crew, recommended adding tomatoes — a way to add flare and a nod to the past during the 30th anniversary of Camden Yards.

The two beefsteak tomato plants were planted in June and began to fruit in late July. All the while, the relievers keep close inspection of a tradition they have little idea about beyond the immediate progress of the plants.

“Those tomatoes are starting to get huge out there already,” Baker said.

“Sometimes it’s super small,” Krehbiel added. “We come back from a road trip, it’s huge and red, and I’m sure it’s getting picked.”

It’s only what Santarone and Weaver would’ve wanted. The pair met in Elmira, New York, when Weaver managed the Double-A affiliate there for the Orioles and Santarone served as the Pioneers’ groundskeeper. Weaver brought Santarone to Baltimore in 1969, and after winning the 1970 World Series, the tomatoes found a home at Memorial Stadium.

Santarone grew his plants down the left field line in the grounds crew area, and after he taught Weaver a few secrets to gardening at Weaver’s home, the manager posed a challenge.

“Earl and Pat were best buddies, and Earl decided he wanted to have a competition with Pat,” said Bill Stetka, the director of Orioles alumni and team historian. “He thought he could grow better tomatoes. So they started this competition each year: Who could grow the best tomatoes? And Pat always won.”

“I’ll say this for him,” Santarone said of Weaver in a 1979 interview with The Baltimore Sun. “He’s a tenacious SOB. He hates to be beat, whether it’s baseball, golf, cards or growing tomatoes.”

And in Weaver’s mind, there might have been a reason his tomatoes seemed to turn out worse than Santarone’s plants, even though Santarone had to wash his tomatoes off with water after games to rid them of spilled beer and soda because he didn’t want “alcoholic tomatoes.”

At the time of Santarone’s death in 2008 at 79, Weaver joked in an obituary by The Baltimore Sun that Santarone might have played a hand in how Weaver’s tomatoes turned out: “Well, he was there when I’d go on the road, and I think there was a little tomfoolery. He might have been pinching some of my buds.”

They put aside their competition to team up with the creation of Earl ’n Pat’s Tomato Food in 1983. There’s still a small packet preserved on the club level at Camden Yards in a display case by the left field corner.

The tradition lasted during the time Santarone and Weaver were both with the Orioles, but it went dormant after their departures. Camden Yards has never known it. But as the stadium turns 30, Sherry turned back the clock with a custom she knew of by legend.

As Doetsch and other groundskeepers tend to the plants, the tomatoes grow larger in their small plot next to the bullpen. Three tomatoes have been eaten by grounds crew staff members so far, and Stetka “can’t wait to taste one.”

And as relievers watch their starting pitcher warm up, they have the chance to admire an old tradition brought alive again.