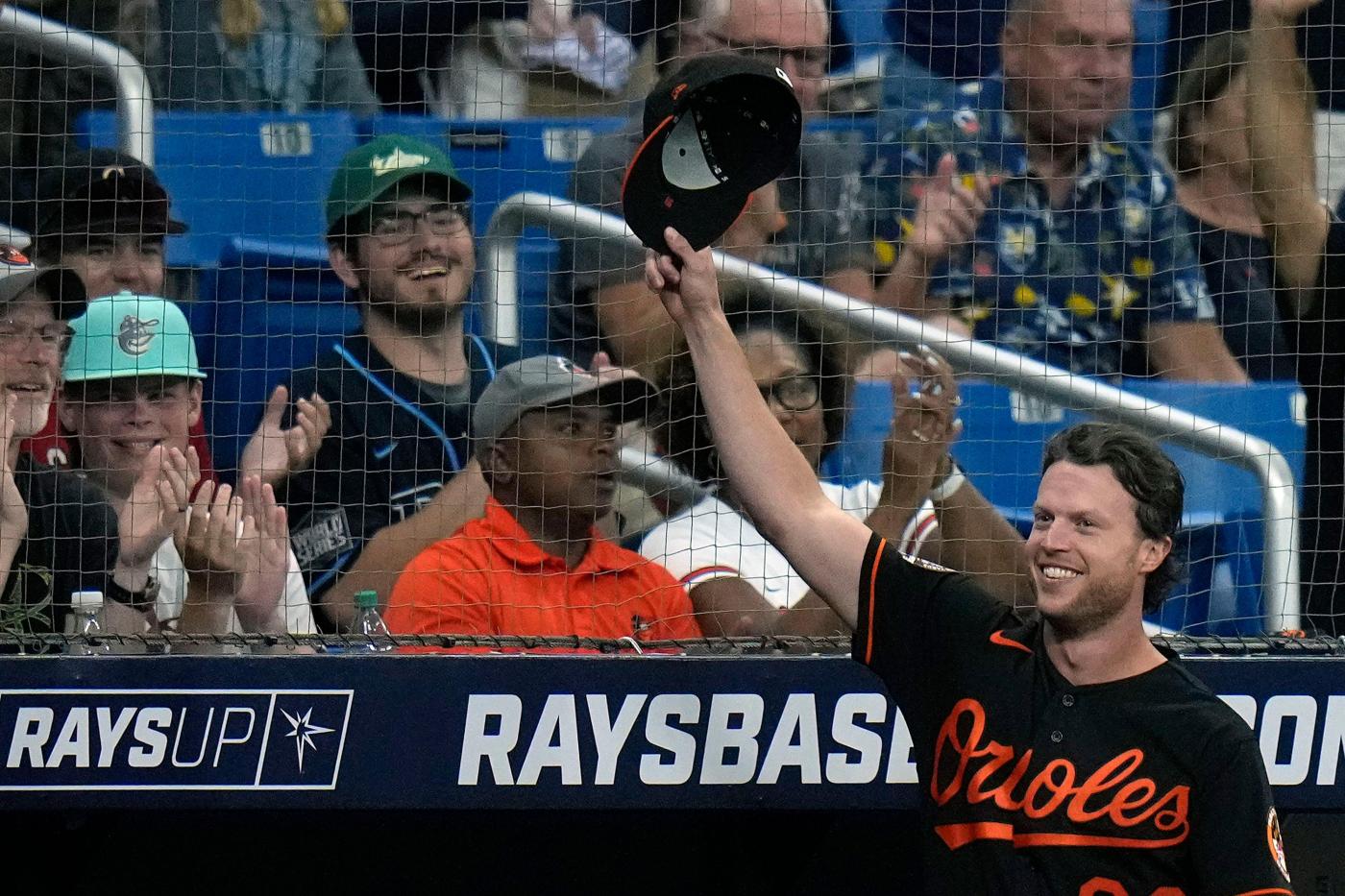 Orioles shortstop Jorge Mateo had already made magic happen once, starting behind second base in a shift, charging down a dribbler on the right side and beating Tampa Bay Rays designated hitter Brandon Lowe to first with a flip of his glove.

It took a replay for the umpires to correctly rule Lowe out, preserving the no-hit bid for starter Austin Voth through four innings. But for all of Mateo’s efforts, there was nothing to be done about the chopper between third base and shortstop to begin the sixth. He got to the grounder deep in the hole, flung the ball toward first and watched as Jose Siri safely reached base.

With that, Voth’s bid for major league history ended. And soon after, his shutout disappeared, leaving the yard in a hurry on a two-run home run by Randy Arozarena.

But even with that ambivalent ending for Voth, his outing was a major statement for a rotation adding left-hander DL Hall on Saturday. The 10-3 win served as a launching pad for Baltimore during the first game of its most significant series since 2016 — the last time this organization found itself in a playoff hunt.

“It doesn’t feel like we’re cooling off or anything like that, as of today,” Voth said. “Our bats were super hot, pitching was great and everything. We’re rolling.”

With a win at Tropicana Field, the Orioles (59-53) moved a half-game ahead of Tampa Bay (58-53) and took sole possession of the third and final American League wild-card spot. They can create more distance over the remainder of the weekend, as well as in a series against the Toronto Blue Jays (60-51) next week.

“We understand it’s a very important series,” Mateo said through team interpreter Brandon Quinones. “But regardless of who the opponent is, whoever we’re going up against, we’re going to give 100%, maximum effort.”

It started with Voth, who flew ahead to St. Petersburg to prepare Thursday. It continued with Mateo’s defense and his first-career five-hit game, part of a season-high 19-hit onslaught for Baltimore. And it went further with rookie catcher Adley Rutschman’s first-inning homer and Cedric Mullins’ eighth-inning bomb, which both caromed off the catwalk high atop the field.

Voth found success with his curveball, forcing seven whiffs on 17 swings, according to Statcast. He relied mostly on that pitch and his four-seam fastball to carve through the Rays’ lineup, surrendering his first base runner in the fourth inning. A throwing error from third baseman Ramón Urías in the fifth kept the no-hit bid intact, and Voth completed five innings for the fourth time this season.

The path here has been turbulent, with the Washington Nationals designating Voth for assignment before Baltimore claimed him off waivers in June. He found his way into the starting rotation, and his ninth start of the season was his best yet.

“It’s great to turn your season around,” Voth said. “Just to be able to go out there and be more consistent than you were earlier this season, that’s exactly what you want.”

His outing unraveled in the sixth after he waited in the dugout for an extended period of time as the Orioles scored four runs in the top half on singles from Rougned Odor, Mateo and Mullins, as well as a sacrifice fly from Urías.

Siri, the first batter of the sixth, reached base with that seeing-eye infield single, and Arozarena got the Rays on the board when he launched a curveball to left that caught just enough of the plate.

“[The curveball] was probably the reason I was successful,” Voth said. “When my curveball’s on, I’m going to continue to throw it until I get hit, and that’s kind of what happened in the sixth inning. But for five innings, it was great for me.”

That breakthrough against Voth hardly mattered, not as infielder Yu Chang took the mound for Tampa Bay in the ninth, grooving 40 mph pitches in a game his team had conceded.

Phillips returns to the Trop

After a tribute video played on the Tropicana Field scoreboard, showing the walk-off single from outfielder Brett Phillips in Game 4 of the 2020 World Series, Phillips propped himself up on the dugout railing to look out at the crowd. His smile spread across his face, his hat waved to the fans inside the park he used to called home and a fan favorite received a warm return.

Before the game, Phillips — who grew up in nearby Seminole, Florida, and played 210 games for the Rays — took the lineup card to the umpires at home plate. And once he was inserted into right field to take over defensively for Terrin Vavra in the sixth inning, he received further applause.

Ahead of the reunion, Orioles right-hander Joey Krehbiel — Phillips’ former teammate at Seminole High School — said he figured Phillips would have some tears in his eyes. The outfielder hid any with a smile.

>> Right-hander Justin Armbruester carried a no-hit bid through 5 2/3 innings for Double-A Bowie against the Akron RubberDucks on Friday night. He allowed a leadoff walk, then forced a double play and was perfect until a two-out single in the sixth inning led to two more hits and three runs.

>> First overall draft pick Jackson Holliday recorded a single and a walk Friday in his second professional start in the Florida Complex League.