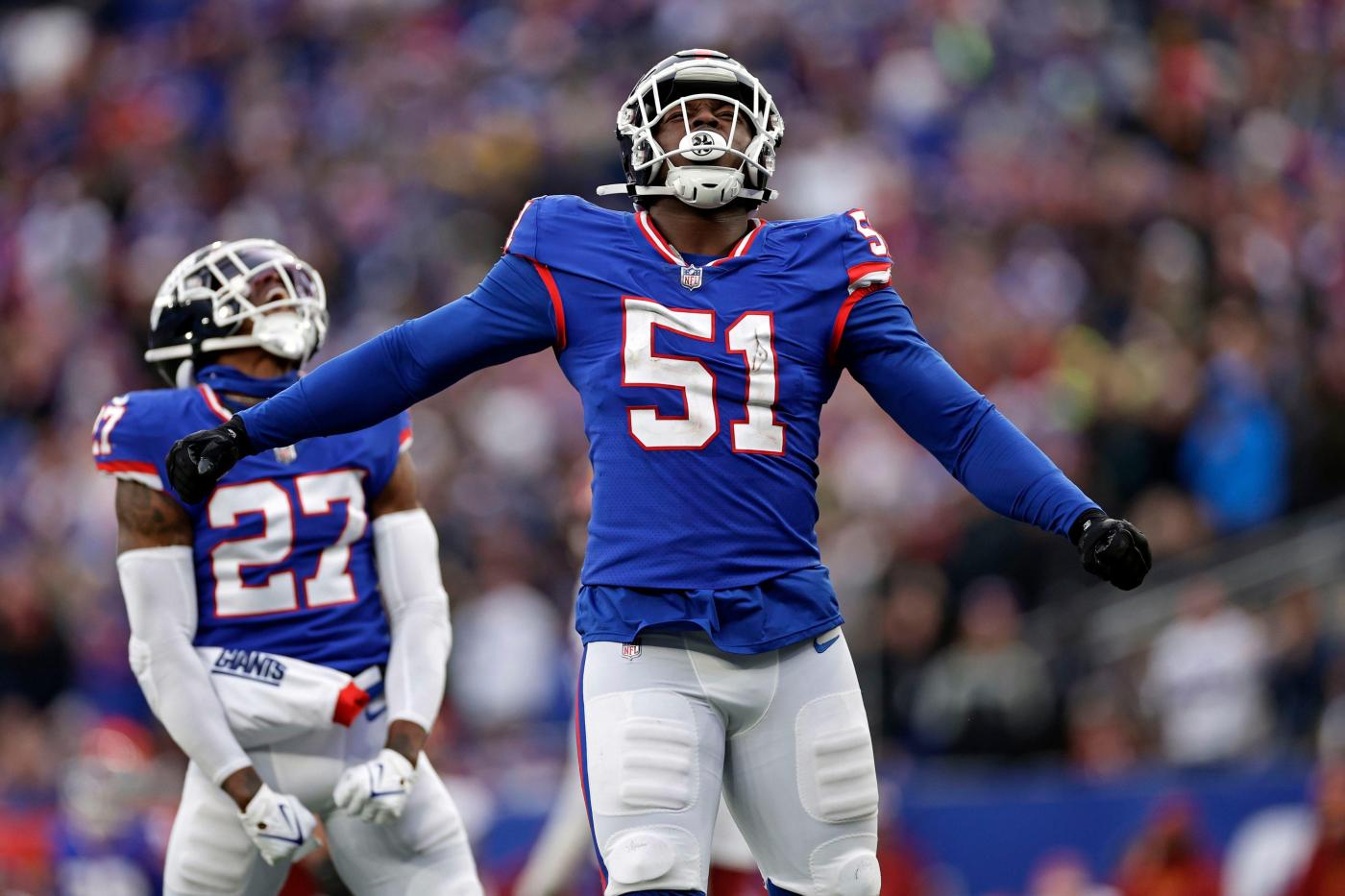 Edge rusher Azeez Ojulari ignited the Giants’ pass rush in his first game since Week 4, and the defense became Sunday’s catalyst to avoiding a loss.

Ojulari had a sack fumble and recovery on Commanders QB Taylor Heinicke to set up an early third quarter Daniel Jones touchdown pass to Isaiah Hodgins. He also had two more QB hits.

“It definitely got me going,” Ojulari said of the sack fumble. “Just fueled my fire and got me on a roll after that.”

They pressured Heinicke on 18 of 41 dropbacks. And Wink Martindale’s defense gave up only 20 points despite playing a whopping 82 snaps and being on the field for a total of 41 minutes and 11 seconds.

They gave up a game-tying Commanders TD at the end of regulation, with slot corner Zyon Gilbert getting picked on and corner Nick McCloud missing a tackle on Jahan Dotson’s touchdown.

But Ward and Thibodeaux said there was no frustration on defense with having to carry the team in the second half with the offense struggling.

“You always want to get that outcome you’re working for,” Thibodeaux said of the tie. “But I think we’ve just got to keep getting better. And teams that let this diminish them or pull them apart, they never last. So we just gotta keep staying together and get back to work.”

A BIG TAUNT & A BIG DROP

A taunting penalty on center Jon Feliciano backed the Giants up to midfield on a late fourth quarter drive while up seven points, robbing them of a chance to go up two scores.

Co-owner John Mara has been one of the strongest proponents of emphasizing taunting penalties, though, so the Giants don’t have much to stand on there, even though it is a terrible rule.

Darius Slayton also had a huge drop on a deep Jones throw in overtime.

“I had it and I just have to find a way to bring it in on the way to the ground,” Slayton said of his leaping attempt.

That was welcome after he carried the ball only three times for 14 yards at Dallas on Thanksgiving, even though Jones fumbled Sunday’s second carry away to set up a Washington field goal for an early 3-0 lead.

The Giants fell behind, 10-0, early after a 19-yard Heinicke TD pass to Terry McLaurin with 2:27 left in the first quarter. But they outscored the Commanders 20-3 through Hodgins’ 6-yard TD catch at 11:34 of the third quarter to take a 20-13 lead before Washington’s late, game-tying drive.

Heinicke drove Washington 90 yards in eight plays for a 28-yard TD pass to Dotson that tied the game with 1:45 to play in regulation. A wild 20-yard completion to Curtis Samuel on 4th and 4 from the Washington 27 kept the game alive.

NOT MUCH BITE FROM BARKLEY

Barkley made a nice run on his touchdown but had only 18 carries for 63 yards, five catches for 18 yards, and seemed tentative at times. He stepped out of bounds on a couple touches when it seemed he could have driven forward for more yards (he has run extremely physically most of the season).

Asked how he played, Barkley was accountable.

“I think Saquon’s a tough guy,” he said. “I think if he has decisions to make, he usually makes the right decisions with the ball in his hand … I have a lot of confidence in Saquon.”

Barkley did put his head down into Washington corner Danny Johnson for a 7-yard gain on a swing pass in overtime.

No one is questioning whether Barkley is tough. He has played through plenty of injuries and worked hard to be his best self this season.

But he holds himself to a high standard and so everyone else does, too.

Williams, who intercepted a pass on Thanksgiving at Dallas, wrote: “Ima jus sleep this off Bcus this can’t be real rn.” And after a commenter said: “We know you can ball, prove it to them,” Williams responded: “That’s wtf I thought I did n that’s wtf hurt the most.”