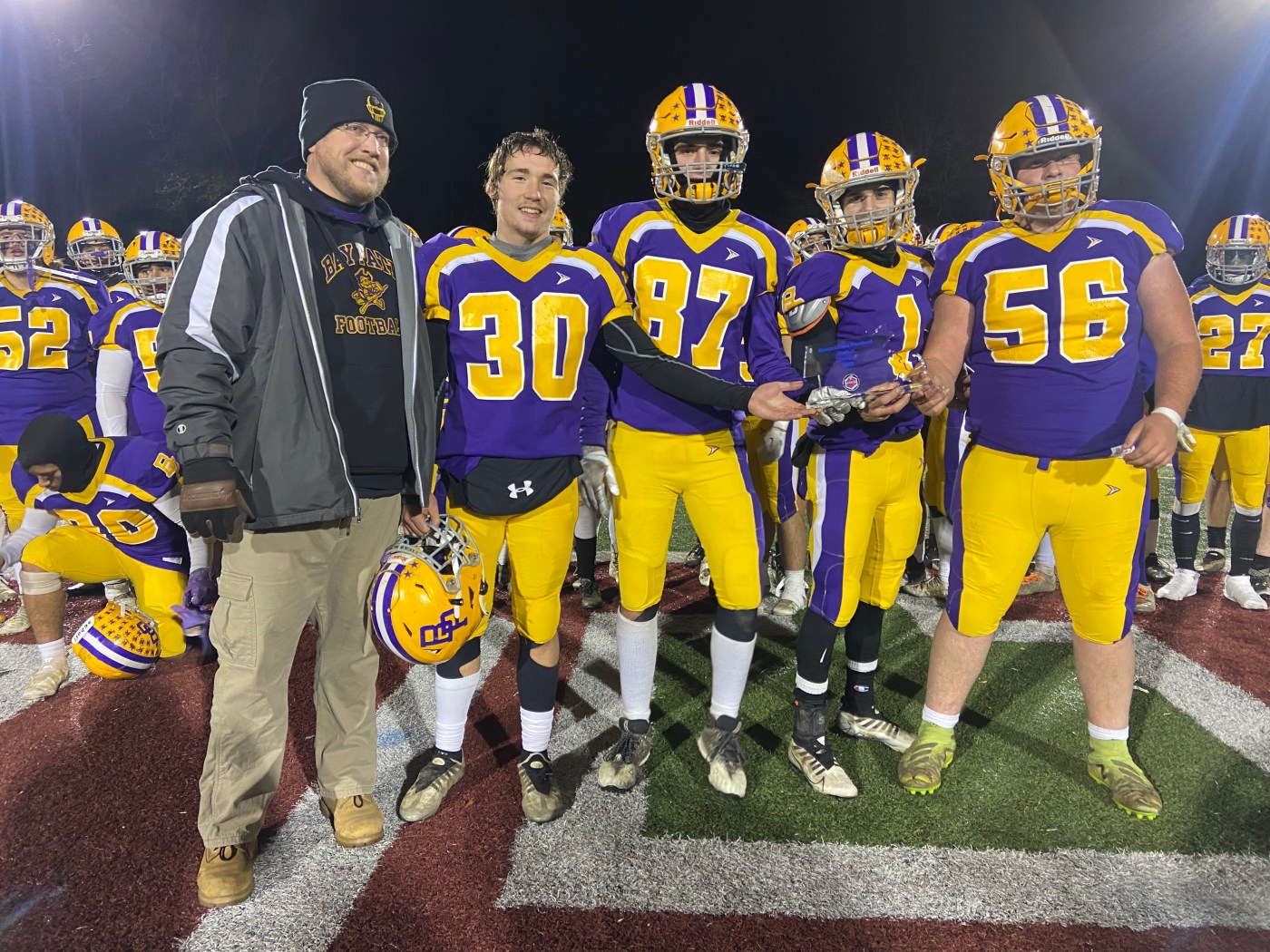 DUDLEY — In a hard-hitting affair on a cold December night, it looked a bit like history repeating.

Bay Path built up a sizeable lead in the first half. Monty Tech rallied.

And just like the first meeting between the two programs on Sept. 30, the Bay Path Minutemen walked away victorious.

This time, no last-second touchdown was required, though.

The Minutemen topped the Bulldogs, 43-36, in Fitchburg on Sept. 30, getting out to a big lead and scoring in the final minute to thwart a Monty Tech comeback. Bay Path jumped out to a 22-6 lead by halftime on Thursday and though the Bulldogs battled back, the Minutemen (8-5) never trailed.

“This is where this program deserves to be, lifting up trophies at the end of the season,” Bay Path head coach Cody Giampa said. “These kids work so hard and it’s what this program has done traditionally. It’s great to get back to that.”

Casey Gallagher had 134 yards on the ground and scored twice, while quarterback Anthony Catino had a short rushing touchdown and Kaiden Branchu had a long TD run in the fourth to give the Minutemen some breathing room.

“We don’t hide what we’re trying to do. We play physical football with a great offensive line and we tackle,” Giampa said. “We didn’t make it a secret what we were trying to do this year. And our kids loved getting out there and playing physical.”

Monty Tech cut the lead to 28-20 with 2:32 left after a Logan Quinn 2-yard touchdown run followed by a Ryan Quinn two-point run, but Bay Path recovered the ensuing onside kick and was able to run out the clock.

“We had a game until the very end there and just came up short,” said Monty Tech head coach Anthony Secino, whose team finishes the season 9-4. “We did this the first time against them, too. I don’t know what it is. We just came out slow.”

Gallagher scored the first two touchdowns of the game before the Bulldogs responded. Logan Quinn (185 rushing yards) found the end zone on a 4-yard run with 5:24 left in the first half to cut the lead to 14-6.

But Bay Path answered before halftime when Catino ran for a 1-yard score with 22 seconds remaining. Gallagher added the two-point run for a 22-6 lead at the break.

Both teams made goal-line stands in the second half, with Monty Tech finally breaking through for a touchdown after a scoreless third quarter. Ryan Quinn punched in a 1-yard run to cut the advantage to 22-12 with 5:43 left in the game.

The Minutemen answered three plays later as Brochu broke a 61-yard scoring run down the sideline to push the lead to 28-12.