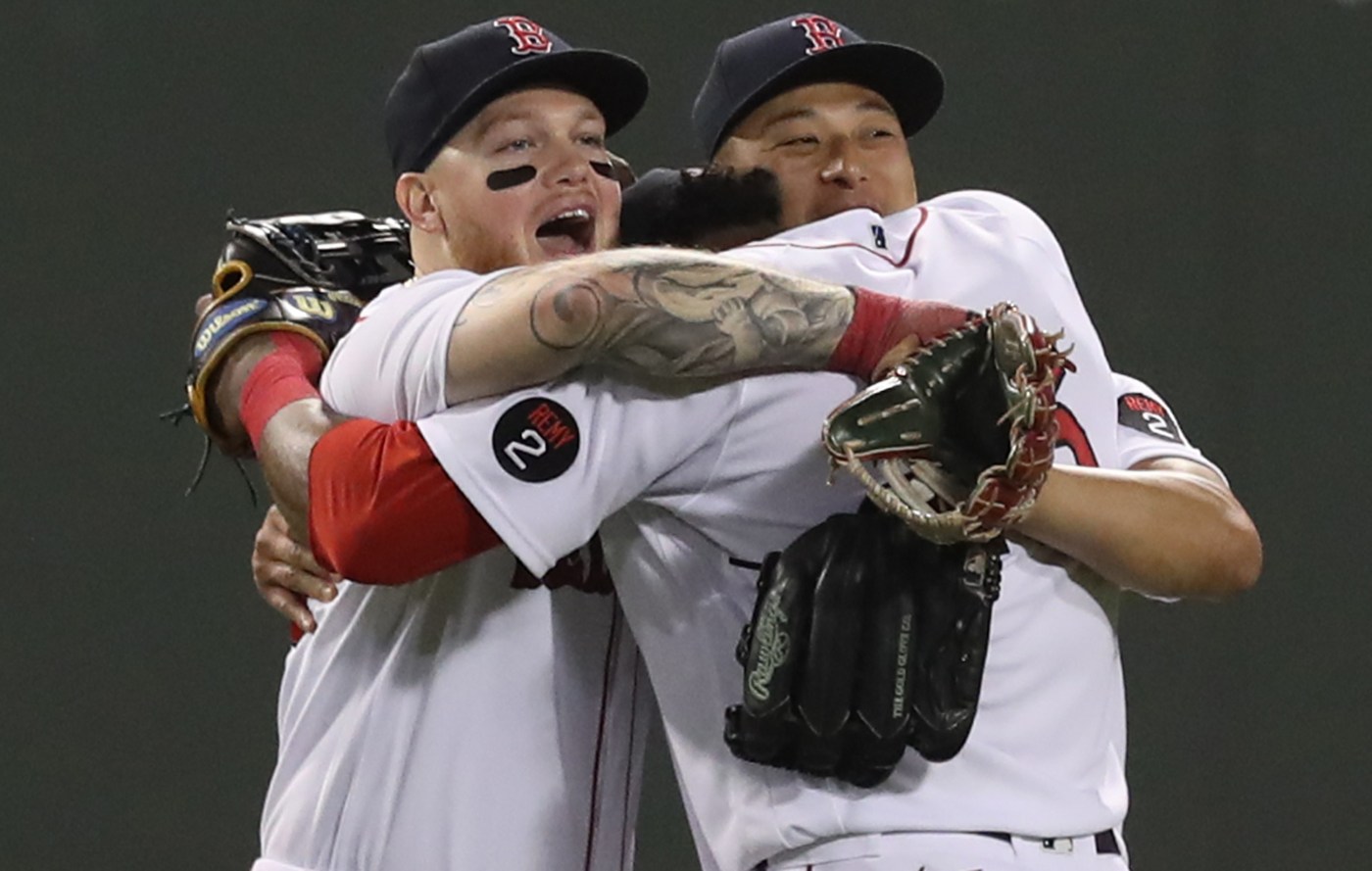 The Red Sox exited the series the same way they started it, 14 games behind the Yankees in the American League East, and yet something felt different.

The odds were stacked against them, heavily we should add, and they played the underdog part all too well, playing from behind just about the entire series.

Over four days, the Red Sox played 37 innings of baseball with the best team on the planet. They were tied or trailing for 34 of those innings.

And they still won two games, splitting the series with a team that has only lost or split a full series five times all year.

They did it with a firm brand of sticktoitiveness that, especially when juxtaposed against the way they played early in the season, is refreshing to watch.

“I think that’s the game we play,” catcher Christian Vazquez said. “We never quit. We’re always, always fighting to the end and to the last out.”

The Red Sox produced just the second blown save of the year by Yankees’ All-Star closer, Clay Holmes, and snapped the Yanks’ 48-0 record when leading after seven innings.

“It’s kind of like a video game watching these guys throw,” J.D. Martinez said of Yankee relievers. “I feel like these guys are just throwing 100 mile-an-hour wiffle balls. It’s unreal. But we battled them, and found a way to get it done.”

The Red Sox played poor defense for much of the series, but they hit well enough to make up for it, with some clutch knocks by Alex Verdugo, Christian Vazquez, J.D. Martinez, Xander Bogaerts, Franchy Cordero and even Jeter Downs.

On the mound, the Sox started Josh Winckowski, Connor Seabold, Kutter Crawford and Nick Pivetta —  three of which have the majority of their season in the minors — against Gerrit Cole, Nestor Cortes, Jordan Montgomery and Jameson Taillon, two of which (Cole and Cortes) were just named to the All-Star team.

Chris Sale, Nathan Eovaldi and Garrett Whitlock combined to throw zero pitches as they’re still on the injured list, although not for long.

And when it was all said and done, the Red Sox mounted two come-from-behind wins, including an 11-6 win on Sunday night in which they scored nine unanswered runs and used their B-squad of relief pitchers to shut down the Yankees’ potent offense.

On paper, it was a series split. It sure seemed like more.

“I don’t think anyone would have bet that we would have split it after the first two,” said shortstop Xander Bogaerts. “They’d definitely be lying. But we’re definitely happy with a split especially by the way the first two games went. It felt like it got out of hand quickly. It’s nice to give the fans something to come back to the ballpark and look forward to and have some bragging rights.”

It’s not as if anyone is pretending the Red Sox are going to catch the Yankees, who have won 71% of their games and are looking like one of baseball’s all-time great teams.

Fan Graphs gives the Yankees a 99% chance of winning the division. That’s not what this series was about.

It was about a Red Sox team that’s playing without half their roster and looked as dead as a doornail after taking a 12-5 beating on Friday night, when Devers re-aggravated a back injury and the talk of the town was Sale’s mediocre rehab start that he finished by destroying a TV in the tunnel.

Infielders were dropping fly balls while outfielders were losing them in the lights and taking terrible routes with misguided diving attempts.

The bullpen – well, we won’t get you started. They blew Saturday’s game but got bailed out with some timely hitting.

They beat the Yankees on Sunday with big moments from Franchy Cordero, who hit a two-run homer in the second and laid down a bunt that scored a run in the seventh, Kaleb Ort, who pitched 1-2/3 scoreless innings in his first big league appearance of the season, and Hirokazu Sawamura, who retired all six batters he faced for two scoreless innings out of relief.

These aren’t All-Stars. These are depth guys playing big roles in big games.

“To come back the way we did, to salvage the game, is huge,” Martinez said. “Especially since we’ve had most of our guys hurt.”

Between two days on June 7 and 8, the Red Sox lost Kiké Hernandez, Eovaldi and Whitlock. Since then, they’ve also lost Michael Wacha, Rich Hill, Tyler Danish and Christian Arroyo to the injured list.

That’s what this weekend was about.

Could the Red Sox overcome a significant number of injuries, test their depth and still play well enough to compete with the class of the A.L. East?

Who knows. But the Sox did prove this: they’re more than capable of stealing a win in a big game, so teams across the American League.

“With the guys we have on the injured list, the at-bats we put together today, the defensive plays we made, it was all-around team positive coming out of this series 2-2,” said Pivetta. “I think that’s extraordinary.”