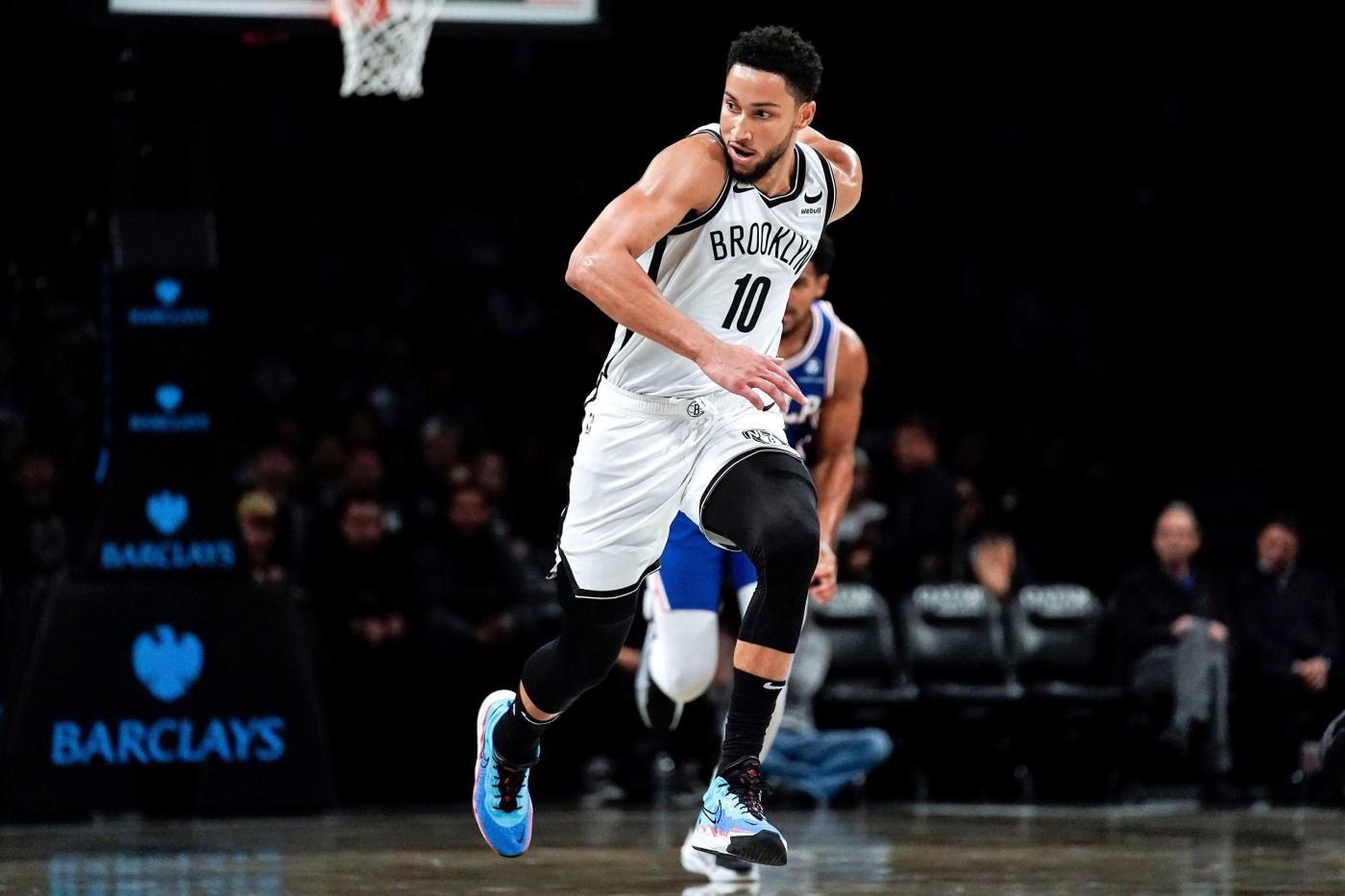 As expected, it wasn’t pretty.

Ben Simmons played his first game in 470 days and he played it alongside new teammates in a fresh offense the Nets’ coaching staff recently installed.

“That’s the one thing I thought I would be nervous but I wasn’t nervous,” Simmons said on whether or not he had nerves in his first game back. “I was excited. To have that feeling to be able to come out and know you are going to play on a NBA floor especially at Barclays with some great players. It’s excitement. Really didn’t have any nerves.”

The result was predictable: to start their first of four preseason games, the Nets looked rusty and at times discombobulated, digging a hole as deep as 20 against a Philadelphia 76ers team resting four key players — Joel Embiid, James Harden, P.J. Tucker and Danuel House — on Monday.

And then Brooklyn’s shots started falling, passes reached their targets, the defense picked up and the score reflected that of a team trying to find itself before the games begin to count.

The Nets undoubtedly have a lot of work to do if they’re going to reach the NBA Finals stage that’s eluded them each of the past two seasons, but for stretches of their 127–108 loss over a shorthanded 76ers team, they looked promising — most promising of all being the motion of what was once a stagnant Nets offense.

“Many of these guys haven’t played together, so we’ve gotta go through this,” head coach Steve Nash said. “It’s gonna be ugly at times, but as the half wore on, you know, we started to see glimpses of the potential, the way the ball moved, the way they were hounding the basketball defensively. So I thought Ben looked pretty good overall and was growing into the game throughout the half.”

Simmons started alongside Kevin Durant and Kyrie Irving against his former team and assumed the point guard-facilitator role with Irving deferring to him to run the offense from tip. Each member of the new-look Brooklyn Big Three tallied 19 first-half minutes before sitting the entire second half of their preseason opener.

With Simmons running the point, the ball “hopped,” as Irving described of the new-feel offense a few days into training camp.

The Nets ran a good chunk of Spain pick-and-roll — that is when someone screens for the screener to get a cleaner roll to the rim and to force the defense to help off of a corner shooter — and after being absent almost all of last season, the set appears to be a staple of the newly-installed offense.

After shaking off the rust, corner shooters cut backdoor with some success and they flared from the corners to give motion to the offense.

“There’s nothing like watching a basketball game when everybody’s moving with pace and everyone’s touching the ball,” Irving said about the new offense. “In comparison to last year, there was just a lot of random isolation, and having Ben be able to play the one, the four, and the five adds some dimensions to our offense, and I think that’s what makes us dangerous is that ability for us to be flexible, adaptable, and to be selfless.”

Simmons only scored three baskets on six attempts against his former team, all on dunks and layups. He attempted to back down former teammate Georges Niang on the low block, but after shimmying and attempting a turnaround fading jump shot, the ball was wide right and hit all backboard.

The Nets, however, aren’t expecting Simmons to hit jump shots. They’re expecting him to make plays for his teammates, to defend the opposing team’s best player, to push the pace in transition and to finish at the rim.

On a rusty night after a season-long layoff, he still checked all four boxes.

On one fastbreak possession, Simmons found starting center Nic Claxton with a behind-the-head, no-look dump-off for an easy dunk at the rim. In a halfcourt set, Simmons posted up on the left baseline then rifled a cross-court pass to the right wing to find Royce O’Neale for a wide-open three. And on the final possession of the first half, Simmons reminded the Sixers why he made First Team All-Defense two consecutive seasons. He hounded Sixers guard Shake Milton and forced a bad pass that resulted in a missed and hurried Philadelphia shot attempt at the buzzer.

That kind of effort would have been welcomed against Jayson Tatum in the playoffs last season.

Simmons’ highlights were sprinkled, however, across minutes of indecision, an obvious product of a new player adjusting to a new offense with new teammates. Sometimes he over-dribbled, other times he picked his dribble up too soon and too far away from the three-point line. He turned the ball over two times to his five assists and turnovers could be an issue because opponents will play the passing lanes knowing Simmons isn’t a score-first guard. The Sixers sure did.

Nash also showed off a few lineups fans should expect to see get regular-season minutes.

Simmons started alongside Claxton, Durant, Harris and Irving, but he also played a hybrid point guard-center role with Claxton on the bench and O’Neale on the floor. Nash’s first substitution was moving Harris to the bench in favor of O’Neale, who developed a strong reputation as a 3-and-D wing on the playoff contending Utah Jazz. O’Neale shot two-of-four from downtown for 11 points and also assumed some ball-handling responsibilities when the offense broke down. Harris, in his first game back after missing most of last season following two ankle surgeries, shot two-of-seven from downtown and airballed two threes.

“Once we get our legs up under us [and] everybody finds out what exactly what they want to do out there, I think we’ll be in good shape,” said Durant. “But for the most part, you know, it may take a couple of days, a couple of preseason games, a couple of weeks, who knows? But I think guys are moving in the right direction.”

What’s clear, at least through one measly preseason game, is that Nash finally got his wish: with the exception of TJ Warren (foot – will be re-evaluated in November) and Seth Curry (ankle – expected to play in final preseason game), his team is healthy enough to begin implementing complex offensive sets.

Simmons sits at the center of the Nets’ ability to get creative offensively and in his first game as a Net, he flashed the versatile blend of size, skill and athleticism that will allow him to play both ball handler and screener in the Nets’ reinvented offense. This is the new era of Nets basketball, and after three more exhibition games, Brooklyn will test its fullest strength against other teams in games that count.