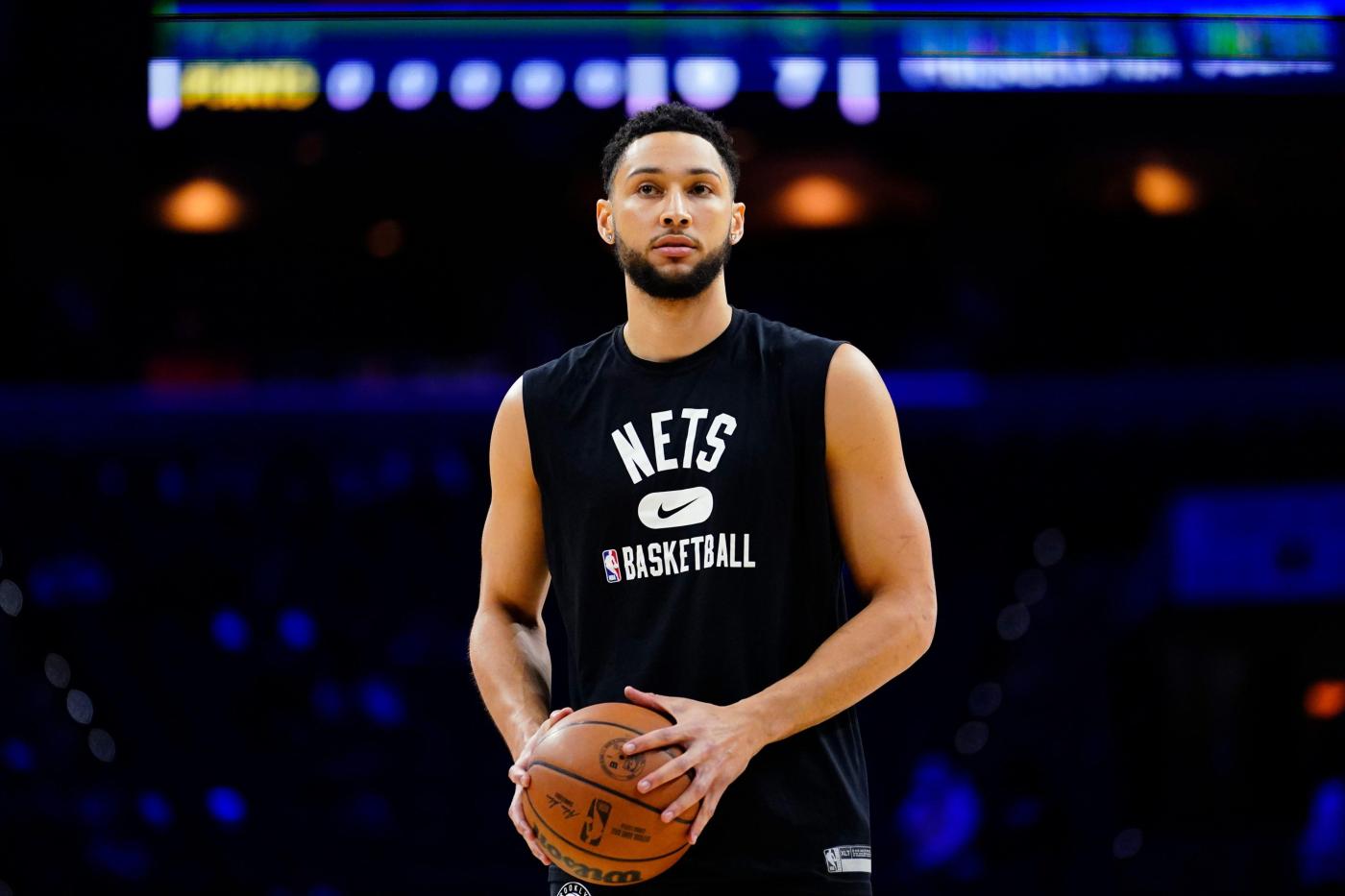 As fans slowly filed out of the Barclays Center after the Nets’ second consecutive preseason blowout loss to an Eastern Conference playoff opponent — this time a 109-80 defeat to the Miami Heat after Monday’s 19-point thumping from the shorthanded Philadelphia 76ers — the in-arena DJ played an all-too familiar tune.

It’s easy to worry after Thursday’s poor performance, a game two-time NBA Finals MVP Kevin Durant said he “didn’t like anything” about except the team leaving with no injured players. Poor defense and offensive miscues aside, Ben Simmons’ unwillingness to attack the basket underscored the Nets’ inability to take care of the basketball or generate quality offense against one of the NBA’s premier defenses.

Especially in a game both Kyrie Irving (paternity leave) and Joe Harris (sore ankle) watched from the sidelines.

Simmons, however, said there are some things he isn’t yet comfortable doing — like “getting to the rim, getting hit and hitting” other players — because he’s only a few months removed from offseason back surgery. He is confident, and so are his teammates and his head coach, about a  return to a more aggressive version of himself as he shakes off the rust associated with 480 days away from NBA basketball and works to get into a better place after getting a microdiscectomy to alleviate the pain stemming from the herniated disk he suffered after the trade to Brooklyn.

“It’s been a year,” Simmons said after posting four points, four assists and 10 rebounds to go with six turnovers on the night. “I’m coming back. Give me some time.”

Still, there were some plays that raised eyebrows more than others.

Simmons, for example, had a 10-inch height advantage on Heat guard Kyle Lowry and had the mismatch with a one-on-one on the high post. Instead of looking to power to the rim against the smaller opponent, he threw the ball back out to Durant on the perimeter.

When Durant immediately gave the ball back to Simmons — a sign for Simmons to take advantage of the mismatch and get to the rim — Simmons took one dribble towards the paint and shoveled a pass to Royce O’Neale on the opposite wing.

Then there were the back-to-back turnovers with just over two minutes to go in the first quarter.

Reserve lead guard Edmond Sumner threw an entry pass to Simmons, who posted up Heat All-Star Jimmy Butler on the baseline. Sumner then cut along the baseline behind Simmons to the rim, and Simmons floated a pass over his head under the basket.

The pass was tipped away and intercepted, leading to a Miami fast break.

On the very next possession, Simmons advanced the ball up the floor against second-year two-way signing Marcus Garrett. Markieff Morris screened Garrett at the three-point line and Simmons pushed within two feet of the foul line.

And then he flung a pass to O’Neale in the left wing. This time, Garrett was in position and made a play to get possession of the ball.

Some of Simmons’ passes were predictable because Simmons didn’t — and doesn’t — look to score often. Durant said the team “definitely” wants Simmons “to be more aggressive and look to score, especially if he’s got a small wing in the post,” and when he “has an advantage going downhill in transition.”

But he also knows how long of a layoff it’s been for Simmons and that Thursday only marked his second game back.

“I think he’s just finding his rhythm again. He hasn’t played in a long time, and to throw you back up in there with the game going fast?” Durant said. “You can play pickup all you want, but once you put someone in the game, all that stuff goes out the window.

“So, he’s getting his legs, (a) quick move here and he’s figuring it out. It’s only going to get better from here.”

“Looking at the box score, I took three shots, which is definitely not enough,” he said. “Obviously offensively, I want to get to the post more, get some more touches down low, be more aggressive, get to the rim, get to the free throw line, which I didn’t do tonight.”

Nets head coach Steve Nash said he expects Simmons to grow in his aggression putting pressure on the rim. He also, rightfully, noted Irving and Harris’ absences put more pressure on Simmons to create by taking two floor spacers off the court.

“He’s gonna get more attempts. Right now obviously it’s a little clunky for us,” Nash said. “Ben will be fine. He’ll improve, he’s gonna get better every night, and he’s gonna be an engine for us and a big part of what we do. So I’m not really worried about him, but it is a process.

“He hasn’t played for a long time and he’s also assimilating to a new group. That takes time, it’s not gonna be perfect, and it probably won’t be any time soon. But if we can keep improving every day that’s all we ask for.”

Two preseason games isn’t full cause to be worried, but the Nets — other than glimpses of unrealized potential — haven’t given fans much to be happy about, either.

Durant finished with 22 points on 8-of-12 shooting from the floor but showed some frustration when he accidentally threw the ball away attempting to get the ball to O’Neale, kicking off a Heat fast break and putting them on the line.

Nash warned things would look ugly early as the Nets adjust to both new rotations and new schemes, and ugly described their loss to the Heat on Thursday. It’s only preseason, but the same can be said for the two other Eastern Conference contenders who have blown the cap off the Barclays Center.