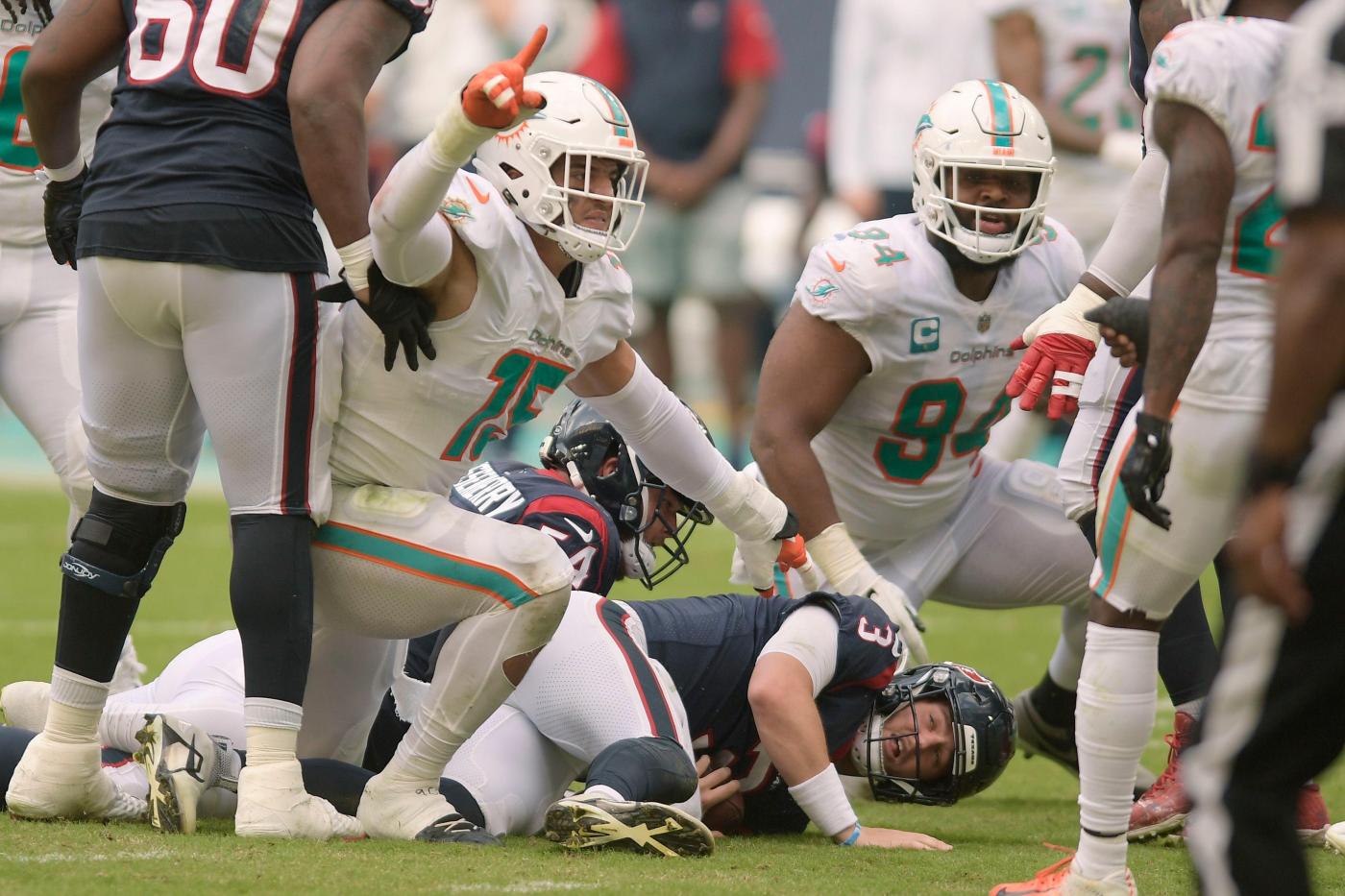 A good start and good finish meant a 30-15 win for the Miami Dolphins against league-worst Houston.

But it wasn’t all good news for a team that stands 8-3 and in first place of the AFC East.

Ten thoughts on the Dolphins win:

1. Stat of the game: 30 Dolphins points to 32 Houston yards at halftime. The Dolphins 30-0 lead at intermission showed this game as the laugher it was. Houston’s 32 total yards didn’t match the Dolphins defense’s total 39 return yards for an interception (23) and fumble (16).

2. Story of the game: Left tackle Terron Armstead left Sunday due to a pectoral muscle injury on the last drive of the first half. That turned a fun Sunday into something troublesome. The seriousness of the injury was unknown during Sunday’s game, but pectoral injuries can be problematic. Armstead had a pectoral injury in New Orleans in 2018 and missed five straight games, played the regular-season finale and then sat out the playoff game. Pittsburgh’s T.J. Watt missed six weeks with a partially torn pectoral this season. So there’s some possible timelines. A fully torn pectoral would be the end of Armstead’s season. There are six games left in the regular season. As for what it might mean to this offense …

3. … Tua Tagovailoa was sacked twice on the final drive of the first half after Armstead left the game and was replaced by Brandon Shell (one sack was negated due to a facemask penalty). Tagovailoa then was sacked three times in the first two drives of the second half before being taken out of the game. Those four sacks are equal to Tagovailoa’s sacks over his previous six games. That dates to the Sept. 25 Buffalo game where he staggered off the field that seems so long ago. Also, the Dolphins punted on their first two possessions of the half after punting in the first half for the first time in eight quarters. Armstead for MVP?

4. Quote of the day: “From the moment we came out.” – Houston receiver Brandin Cooks when asked when this 1-9-1 team realized Sunday it was overmatched. “I’m talking from an offensive standpoint, the moment we stepped out there. That’s truth. That’s facts.”

Hill kept his big season going Sunday with six catches for 85 yards. That’s eight straight games Hill, has at least five catches. In fact the only game he didn’t have at least five catches was a two-catch, four-yard game against Buffalo. Sunday’s six catches came on nine targets with a long of 29 yards. To tell how close Hill and Jefferson are, Hill has 87 catches on 116 targets and Jefferson has 81 catches on 116 targets.

5. This week brought the age-old debate if wins is a quarterback stat and, bless them, Mike McDaniel and Tagovailoa said it wasn’t. It’s not. Baseball analytics came to the conclusion a “win” wasn’t a pitching stat and it’s the same in football. The Dan Marino years taught me that. Quarterbacks, however, can lose games and that’s why Tagovailoa breaking a franchise record of 174 passes without an interception was telling. Even his first two years, when there were questions of who he was, he didn’t lose games. That’s the first step for an NFL quarterback. Tua broke the record of 160 passes without a touchdown that Ryan Tannehill had in the 2014-2015 season. Tagovailoa completed 22-of-36 passes for 299 yards and a touchdown on Sunday.

The Jets beat Chicago on Sunday, 31-10. The strength of schedules are so high in good part because of remaining games against division opponents, all of whom are above .500. The Dolphins have one game against a losing team the rest of the way – 4-8 Green Bay on Christmas Day.

7. We’re three games into Bradley Chubb’s time with the Dolphins and he made some noise on the stat sheet Sunday. Two tackles, one sack. That’s after four assisted tackles (no solo) and a half-sack in his first two games. Of the five Dolphins sacks Sunday, three came from linebackers (Roberts, Riley, Baker) with Jaelan Phillips joining Chubb as edge rushers with sacks.

9. When Mike McDaniel went for it on fourth-and-1 at the Texans’ 12-yard line their second possession, it wasn’t much of a surprise. That’s a place to go for it, especially against the league’s worst defense. Tagovailoa threw 9 yards to Trent Sherfield for the first down on the way to a touchdown. The larger thought about McDaniel being overly aggressive doesn’t match up with the numbers, though. The Dolphins’ fourth-down chances this year aren’t out of sorts with the league. They entered Sunday tied for 11th with three other teams with 14 fourth-down attempts. They converted of six of those (now seven of 15) to enter Sunday ranked in a tie for 22nd.

* The Dolphins’ three turnovers — Vernon McKinley interception, Xavien Howard fumble recovery for a TD, and Andrew Van Ginkle interception — are what a good defense does to the worst-rated offense.

* Jeff Wilson Jr. has played three games for the Dolphins and has a touchdown in each one. At this rate …

* Dolphins won’t be home again until Christmas Day against the Green Bay Packers.

Next week: Dolphins at San Francisco 49ers. It’s the start of a three-game road stretch that’s a step up in weight class from the previous month. McDaniel grew up as a coach with San Francisco under Kyle Shanahan and, before him, father Mike Shanahan. That’s just one of several coaching connections with the 49ers to go with playing ones like running backs Raheem Mostert and Wilson Jr. The 49ers (6-4) entered Sunday’s 4:25 p.m game against New Orleans on a three-gam win streak.