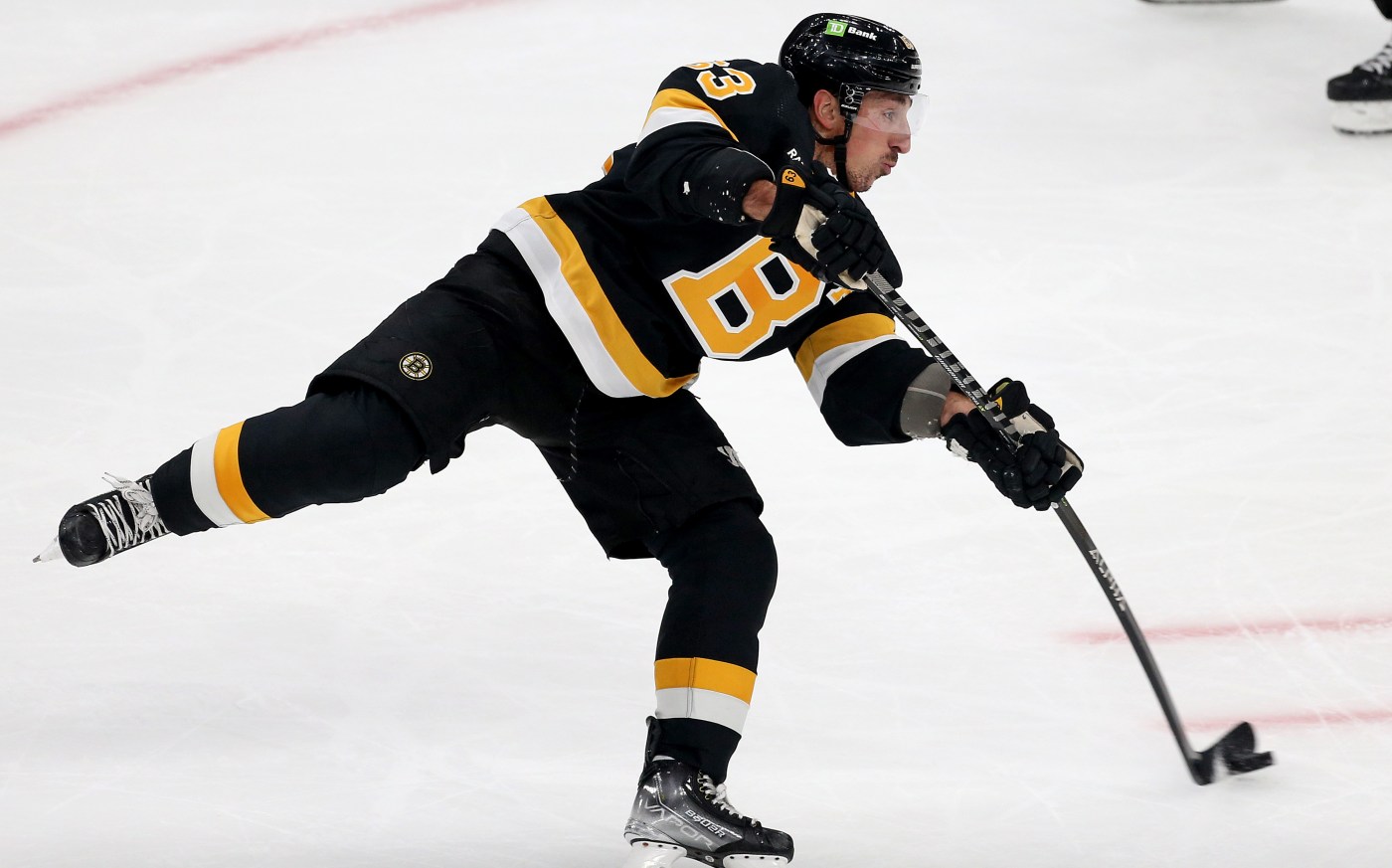 Brad Marchand certainly knows how to make an entrance.

Playing in his first game since undergoing surgery on both hips, the Bruins’ star winger scored two goals and added an assist to lead the B’s to a 5-1 victory over the up-and-coming Detroit Red Wings at the Garden on Thursday.

The B’s exploded for three goals in less than two minutes early in the third period to win convincingly and improve their record to 7-1, tying them for their best start in their near century long history.

Meanwhile, as the B’s start to get players back they made a move to clear up roster space. They traded center Jack Studnicka, who had not been able to gain any traction at the NHL level in his young career, for two developing players – 23-year-old goalie Michael DiPietro, currently playing in the NHL, and Swedish defenseman Jonathan Myrenberg, now playing in the Swedish Hockey League.

Whether the B’s acted a hair too soon remains to be seen, becuase they lost a centerman during the game. The only blemishon the night  – and it could be a significant one – was the loss of David Krejci to injury in the second period.

The Bruins took a 1-0 lead in a first period in which Jeremy Swayman, playing his first game in nine days, had to be on top of his game.

The game marked the semi-surprising return of Brad Marchand, returning a month ahead of schedule from having both hips surgically repaired. And wouldn’t you know it, he had a big part in the B’s first goal. After both he and Jake DeBrusk won a puck battle along the right boards, Marchand sent a cross-ice pass to Derek Forbort, who handed it off to an oncoming Charlie Coyle. Coyle sliced through the slot and snapped a wrist shot past Ville Husso for his second goal of the year.

It was not a perfect period for the B’s. First, Jakub Zboril, back in the lineup after being scratched on Tuesday, sent a bad pass from behind his net intended for Coyle that went right to Adam Erne in the slot. Swayman stoned him with a pad save on the wrist shot from eight feet in front.

Later, Patrice Bergeron’s stick snapped high in the offensive zone, allowing the Wings to break out on a 3-on-1. Forbort made a terrific stick check in on Dylan Larkin’s pass attempt, but then Swayman had to make a strong save on Dominik Kubalik’s follow-up.

Marchand would then put the B’s up 2-0 but not before what could be a costly loss.

Michael Rasmussen lined up David Krejci and then nailed him with a high stick, for which he was called. But the damage appeared to be on the original hit. As he skated to the bench, Krejci hunched over and then dropped his stick as if his arm or shoulder was bothering him. He went straight to the room. It did not look good and Krejci (upper body) did not return.

The B’s did not make Rasmussen pay for that transgression, but they did when he crosschecked Nick Foligno in front of the B’s net on his next shift.

On the second power-play, Marchand took a feed from Hampus Lindholm and simply beat Husso with a wrist shot to the glove side at 11:53.

After Brandon Carlo took a holding penalty, Swayman again was called upon to make a couple of excellent saves and he made them.

But he could not escape the second unscathed, with the Wings getting on the board with 1:11 left in the period on a preventable goal.

With the Wings pressuring, Craig Smith took control of a puck deep in the left corner and threw it up the middle of the ice. Filip Hronek kept it in and his pass was initially blocked by Taylor Hall, who lost his stick on the play. Erne simply collected the loose puck and flung it toward the net, which seemingly surprised Swayman and got by him.

That put the Wings within a shot of tying it up going into the third period. But that close proximity to the B’s didn’t last long as the B’;x exploded for three goals in 99 seconds early in the third..

Rasmussen’s bad night continued. Early in the second period, he lifted the puck out of play on a breakout for a delay of game penalty. And at 2:55, Marchand scored his second of the game on the power-play, knocking home a rebound.

The B’s had only just begun the onslaught. Smith made up for his earlier miscue when he scored on a deflected shot.

Finally, the B’s scored on another power-play, drawn by Marchand, who just missed the hat trick on a wraparound. On the advantage, David Pastrnak sizzled a one-timer past Husso at 4:34 and the B’s were on their way