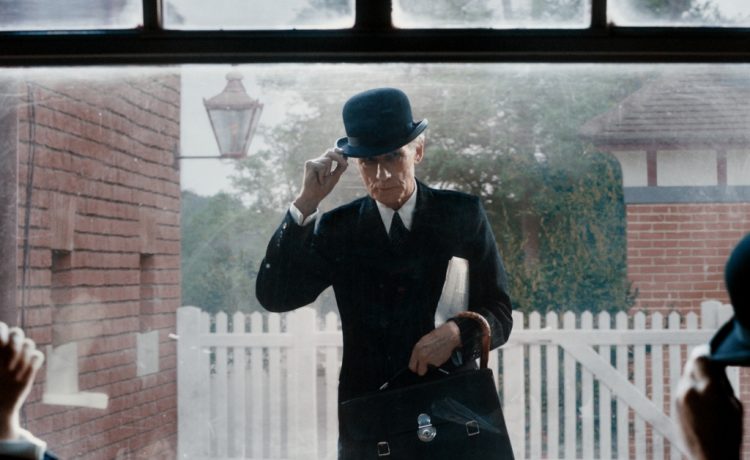 A greatly moving hybrid film, the British entry “Living” is based on the 1952 film “Ikiru” by the Japanese master Akira Kurosawa, itself loosely based on Leo Tolstoy’s 1886 novella “The Death of Ivan Ilyich.” The Kurosawa film features a great Takashi Shimura (“Seven Samurai”) in the lead. “Living,” which was adapted by Nobel Prize-winning novelist Kazuo Ishiguro (“The Remains of the Day”), tells the 1953-set story of an older London civil servant (a heartbreaking Bill Nighy) , who learns that he has cancer and his days are numbered.

The interesting thing is that this news is both devastating and liberating. For one, the film’s protagonist, whose name is Williams, can stop going to the office, where he has gone every working day and ruled with a gentle, but strong hand for many years. In opening scenes boasting a flight of bowler hats, a new employee named Wakeling (Alex Sharp) accompanies his colleagues on the train commute into London, and they encounter the tall and regal Williams on their way into the city. Into this cadre of pale men, young and middle-aged, led by Williams, comes a somewhat sassy young woman named Margaret Harris (a delightful Aimee Lou Wood of TV’s “Sex Education”). Ms. Harris is a literal splash of color (and sound) in the monochrome office, and it is no surprise that Williams tries to befriend this vivacious creature while he can.

For those used to watching Nighy bring octopus-faced Davy Jones menacingly to life in the “Pirates of the Caribbean” films or steal “Love Actually” (2003) from his younger cast mates, his gentle and understated work in “Living” will come as bit of a surprise. As Williams, Nighy is at times already a ghost. Also newly arrived are three mothers, who visit the Public Works office over which Williams presides, to petition to have a bombed-out and hazardous area in their neighborhood transformed into a playground. The dying Williams makes this noble cause his last stand. For the most part, Williams and his colleagues have merely referred members of the public to other offices in order to avoid rocking the boat and risking difficulties. They are a bunch of literal paper pushers.

Before long, it gets back to Williams’ sleepy London suburb, where the widowed Williams lives with his son (Barry Fishwick) and daughter-in-law (Patsy Ferran), that the old man has been seen with a much younger woman. He even takes Ms. Harris for lunch at Fortnum’s. In many ways, she is the Ghost of Christmas Past, a sweetly stinging reminder of the opportunities Williams has passed up.  Taking half of his savings for a trip to the seaside, Williams meets a playwright (Tom Burke), who shows him the local attractions. They are a bittersweet reminder to Williams that, while he could help those young mothers get their playground, he can’t really change much about himself at this point. South African director Oliver Hermanus of the acclaimed 2019 release “Moffie” guides Nighy in this quietly triumphant performance.