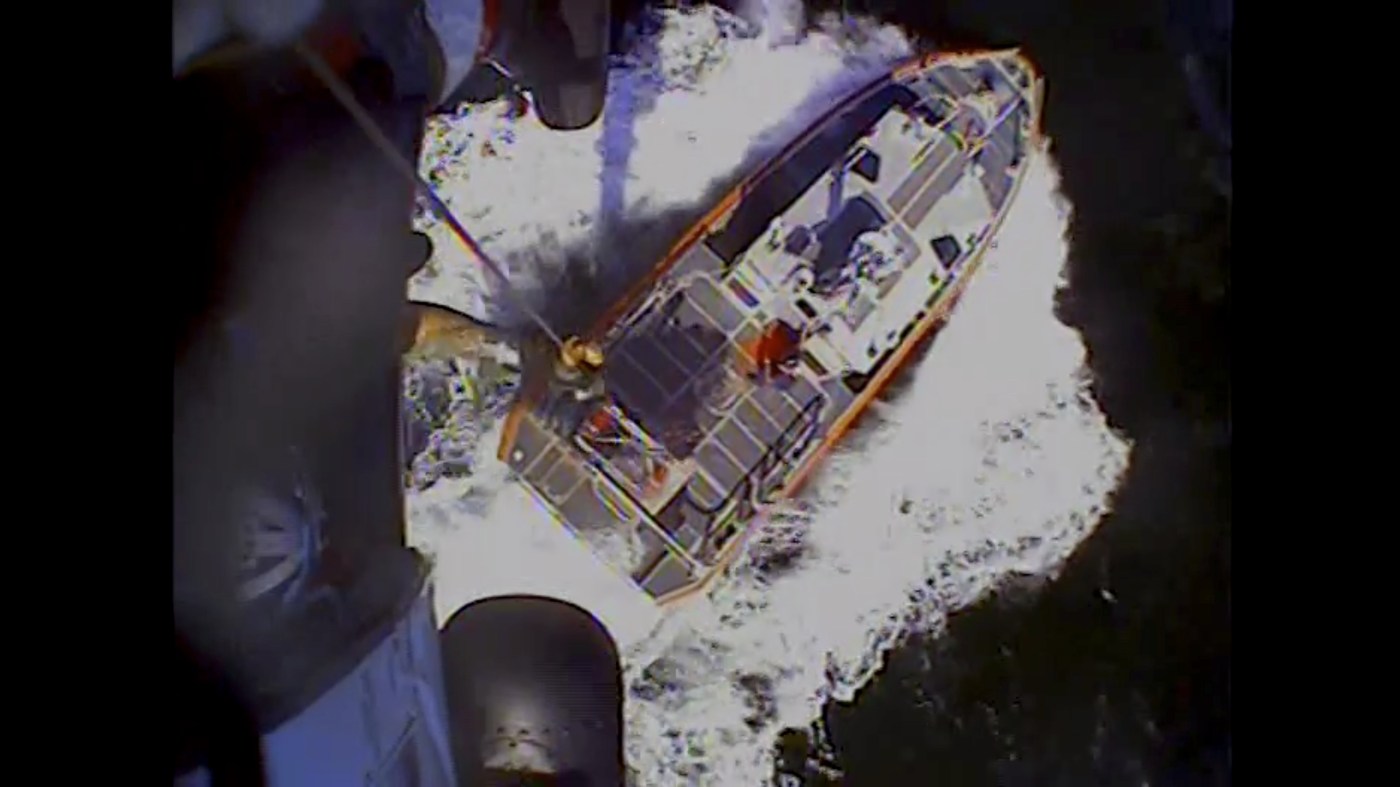 NEW ORLEANS — Two anglers whose boat sank over the weekend in the Gulf of Mexico clung to an improvised float and fought off sharks while the third swam what felt like miles to search for help.

The swimmer, Phong Le, managed to find a cellphone signal, and sent a Google map of his location just before his battery died, he told ABC News on Tuesday.

The three men had been in the water since about 10 a.m. Saturday — the sharks showed up Sunday morning, Luan Nguyen said. One bit the front of his life vest.

“And I think that’s where I caught … these injuries on my hand,” he told the broadcaster, which identified the third boater as Son Nguyen.

“I took my two thumbs and jabbed him in the eyes, and he took off,” Luan Nguyen said.

Even as the two men were pulled from the water, they were being circled and harassed by four blacktip sharks measuring about 4 to 6 feet (1.2 to 1.8 meters) long, said Andrew Stone, a seaman in the Coast Guard boat crew that rescued the exhausted pair.

“They were too tired to even be panicking,” he told The Associated Press in an interview alongside other Coast Guard members and officials, none of whom referred to the boaters by name.

All three boaters were back home Tuesday, the Coast Guard said.

“These peoples’ will to survive and their lifejackets is what saved their lives,” said Lt. Katy Caraway, a helicopter co-pilot who rescued Le, who was suffering from hypothermia, and then flew all three to a New Orleans hospital.

She said that while her helicopter was pulling up Le, the man who swam for help, an airplane located the two who had to fight off sharks about a half-mile to a mile (0.8 to 1.6 kilometers) away. A Coast Guard boat based in Venice rushed to that spot.

Helicopter rescue swimmer Richard Hoefle said both boaters had deep cuts on their hands, and one was missing the tip of a middle finger.

In the hospital, he said, one man told him, “I was 100% certain my time was up” before he saw the aircraft that spotted them.

When the group’s 24-foot (7.3-meter) boat sank, it left them with no radio in an area without cellphone service.

“We made a distress call on the VHF radio to the Coast Guard and let them know that we’d taken on water,” Le told ABC. “And not even seconds after that, the boat was nearly halfway in the water.”

They tied two ice chests together as a makeshift float. One happened to hold water and fruit, Luan Nguyen told the network.

One man’s wife reported them missing about 10 p.m. Saturday, said Lt. Cmdr. Kevin Keefe, rescue coordinator for Sector New Orleans. The woman didn’t know their launch point, he said, and it took about 3.5 hours to find their vehicle in Venice, near Louisiana’s southeastern tip, so crews would know the best areas to search when dawn broke.

Le said that he swam off for help on Sunday. After swimming for what felt like miles, he got a signal on his cellphone and texted his Google map location to a friend.

“I see him trying to reply to me. And the phone cut off — I ran out of battery,” Le told the network.

Then the screenshot arrived.

Using coastal contours, the command center was able to figure out where it was, said Keefe.

The Coast Guard said the men were found about 25 miles off Empire, a small community located along the last narrow strip of the Mississippi Delta, southeast of New Orleans.

Le was rescued first. After the two shark-fighters were lifted into the helicopter, there was a lot of hugging, Hoefle said. Until then, he said, Le “had no idea if his friends were alive or dead.”

Once everyone was on the helicopter, the three Coast Guard crewmembers on the boat below could express their joy. “We were celebrating — whooping and hollering,” said Stone.

“I’d say this was a rescue for the books for all of us,” Caraway said.

This story has been updated to correct who was celebrating after the rescue. The boaters hugged inside the helicopter, and the Coast Guard crewmembers celebrated on the boat below.