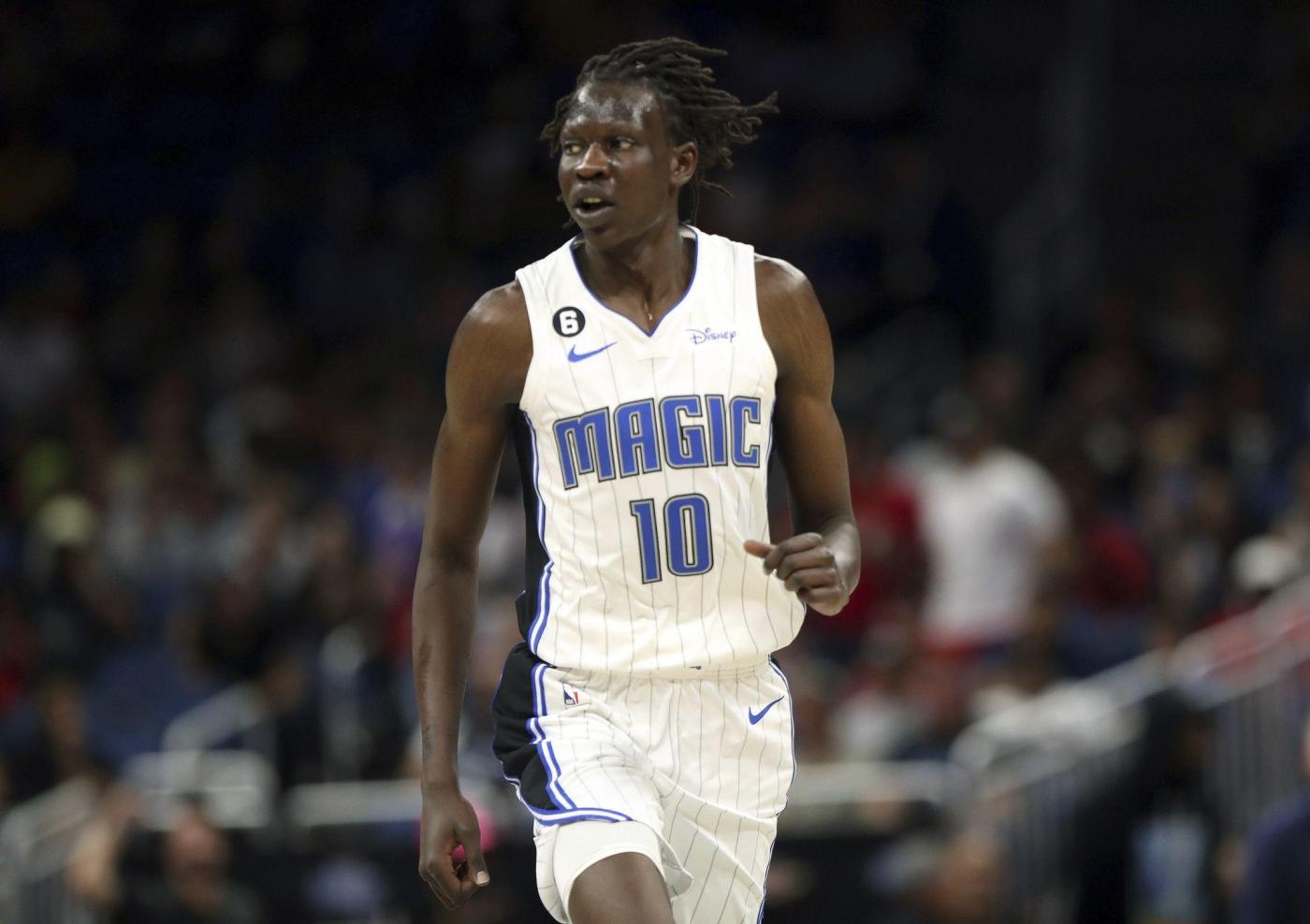 When the Orlando Magic traded for Bol Bol, a 22-year-old big man, in February and re-signed him as a free agent, there were questions about what he’d bring to the floor and his role.

Through four games with the Magic, there’s greater clarity.

Bol’s performance in the Magic’s loss to the Knicks at Madison Square Garden in New York wasn’t just notable because of his stat line — a career-high 19 points to go with 5 rebounds and 4 blocks in 20 minutes. It also marked the first time he’s played at least 10 minutes in four consecutive games since being a second-round pick in 2019.

The consistent playing time has helped make Bol, who has averages of 10 points on 65.4% shooting and 4.8 rebounds as a reserve entering Wednesday’s road game against the Cleveland Cavaliers, less of an unknown.

“It’s been very important for me because I feel like every game I’ve gotten better,” Bol responded when asked about playing multiple games in a row. “I’m seeing stuff happen each game. The game’s starting to slow down the more I play.”

Through a small sample of four games (64 minutes), Bol’s provided the Magic with shotblocking, offensive rebounding and a versatile rim-attacking scoring threat — off and on the ball. He’s mainly been used as a backup “big” playing alongside Wendell Carter Jr. and Mo Bamba but has been the lone big in some lineups.

“The versatility — we talk about the size and length he possesses, but also the basketball IQ,” coach Jamahl Mosley said of Bol. “His ability to make plays down the stretch, he creates matchup problems.”

Bol’s 2.8 blocks per game were the league’s second-best mark among players who played at least two games entering Tuesday, only behind Milwaukee Bucks big man Brook Lopez (3.5 in two games). Everyone else in the top-nine average at least 21 minutes per game compared to Bol’s 16.

He uses his length (7-foot-7 wingspan), anticipation and footwork to block shots. Bol’s just as much of a threat to block a shot outside the arc as he is inside of it.

Of his 11 blocks, 4 have been on jumpers (1 midrange and 3 3-pointers). His combination of size, timing and nimble feet make it difficult for perimeter players to get their shots off cleanly over him — even when it seems like he’s no longer in the play and can’t recover in time.

The same happens inside the paint.

Bol’s shown a willingness to do the dirty work for a big man — attack the offensive glass and rim run. Of his 40 points, one-quarter have been off offensive rebounds and putbacks.

The Magic have put a greater emphasis on offensive rebounding to take advantage of their size and Bol so far has been one of their bright spots in that area, rebounding a team-high 9.5% of the Magic’s misses.

Bol’s been a threat to score inside the paint outside of offensive rebounding.

He’s run the rim well in transition and has shown an understanding of angles and timing when roaming the baseline, making himself available for lobs and dump-off passes for an easy 2 points.

The more unique parts of Bol’s game are his ballhandling and driving abilities for his size (7-foot-2).

He moves with the dexterity of a guard with Eurosteps, spin moves and stutter steps, creating shots most perimeter players don’t because they aren’t as big or lanky.

Bol’s been a consistent rim threat, making 88% of his shots inside the paint (16 of 18). He has good touch around the rim.

“We tell him all the time to play his game [and] be aggressive put there,” Banchero said after Monday’s loss. “That’s what he did. He’s blocking shots. He has great touch around the basket. He’s playing with good energy.”

For as much as Bol has shown in a short period, there’s still more to his game and areas for him to grow.

Teammates raved about his 3-point shooting during the offseason and training camp but he hasn’t shown it (1 of 3 on 3s) because of how long it takes for him to load up.

Knicks big man Mitchell Robinson blocked Bol on Monday after he took extra time to get his feet set and bring the ball from his side, down to his waist and back up above his head before shooting.

Bol’s slower shooting mechanics make it easier for defenders to close out on him and contest his open shots, though many won’t have the size and quickness to block him like Mitchell.

Defensively, he needs to do a better job of staying engaged off the ball throughout a possession. There have been multiple times the player he was defending got free for an open shot because Bol lost track of them.

He also needs to be more consistent with boxing out and not taking himself out of rebounding positions by going for blocks. This can be troubling when he’s the lone big on the floor because there may not be more rim protection behind him.

“This is new to me — playing in the rotation,” Bol said. “It’s a new thing and something I’m still getting used to. The more comfortable I get with that, the more the game will open up for me.”

There were a lot of questions surrounding Bol when he arrived in Orlando. He was slated to be sidelined for the season after not being too far removed from having right foot surgery. Injuries were a significant reason why his career had derailed.

Bol, a 5-star recruit in the 2018 class, played nine games for Oregon his freshman year before missing the rest of the season with a stress fracture in his left foot that required surgery. He was expected to be a lottery pick in the 2019 draft before the injury, but he was taken 44th instead. He only averaged 6.2 minutes (328 total minutes) in 53 regular-season games during his three seasons with the Denver Nuggets.

The injury and lack of playing time concerns didn’t faze the Magic, who’ve prioritized developing younger players as part of their rebuild. Orlando’s brass saw Bol’s talent and potential even though he hadn’t had many chances to show it.

Now he’s getting his chance and he’s making it count.

“It’s very difficult but it’s part of the game — have injuries, be on teams you don’t play,” Bol said. “It depends on your situation. I’m just happy to be in the right spot for me now.”

Tip off is 7 p.m and can be watched on Bally Sports Florida/Bally Sports+ or listened to on FM 96.9 The Game.