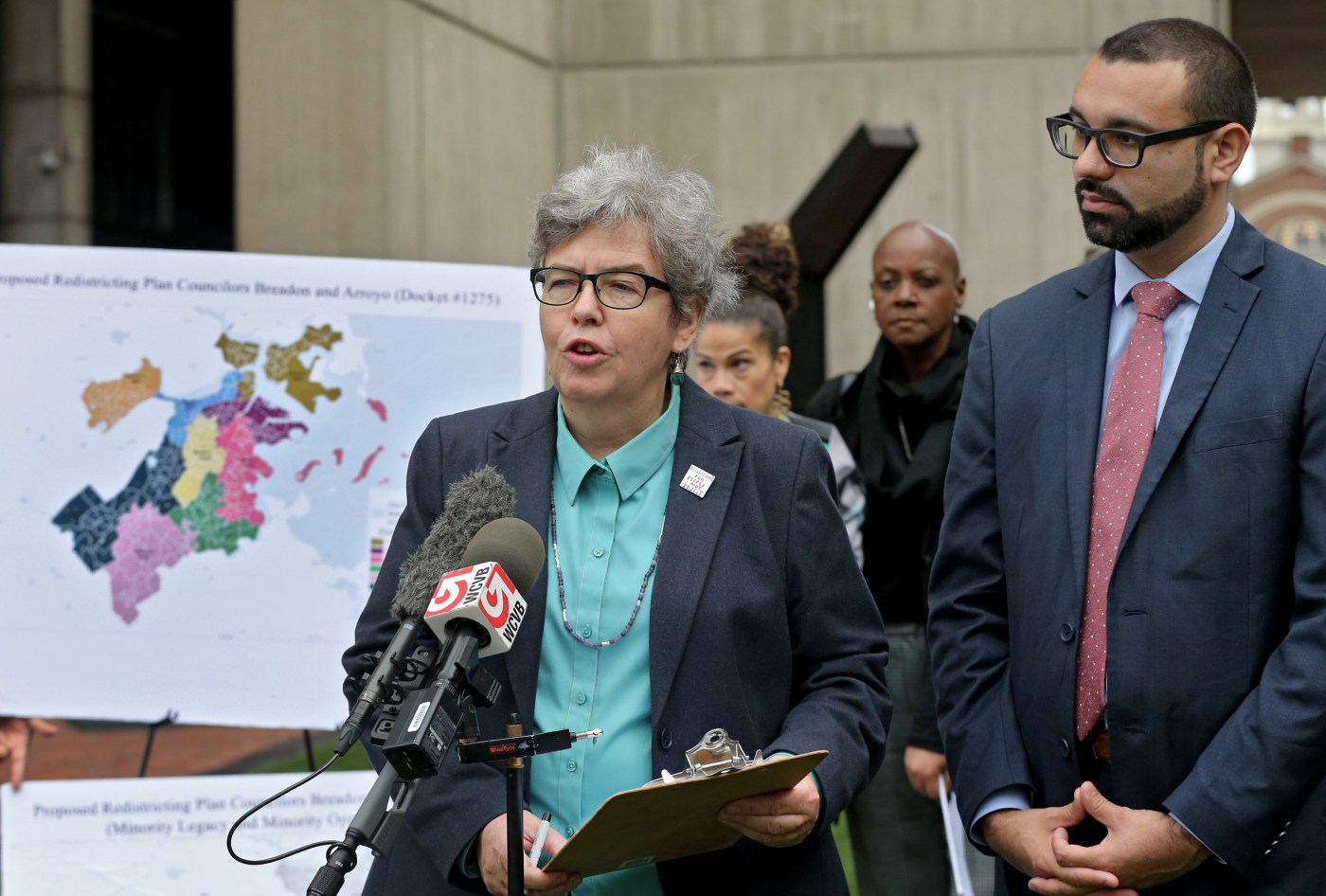 The city council appears set to vote Wednesday on a redistricting map — though quite what that hotly-debated artifact of cartography is going to look like is still up in the air.

“We will present a docket in a new draft tomorrow,” City Councilor Liz Breadon, the redistricting committee chair, said after another full day Tuesday of working sessions in which the communal huffing and puffing hung heavy as the muggy haze outside.

Some elements of agreement did begin to coalesce around the so-called “unity” map cooked up by Breadon, City Councilor Ricardo Arroyo and various advocates that’s generated so much debate.

“I think it would make sense to keep that South Boston public housing in D2,” said Bok, agreeing with some of the concerns that had made Flynn so angry upon the introduction of the map.

A group of Southie civic organizations has filed an open-meetings law complaint about the process and is trying to get more hearings before a vote.

The other area of focus outside of the Dot-Southie borderlands is on the other side of D3, where the map as originally proposed would swing the Cedar Grove/Adams Village neighborhoods from Baker’s D3 to City Councilor Brian Worrell’s D4.

The justification, proponents say, is to bring more white people into Worrell’s heavily Black district to avoid concerns that the map might get into trouble for “packing” too many minority votes into D4.

“Our mandate is to strengthen opportunity districts,” Arroyo said.

That said, though, the federal Voting Rights Act experts that Breadon had speak on Tuesday did say that the current districts in use now don’t appear on first blush to have problems in this regard.

Neither Worrell, who fears that this alongside the ongoing gentrification of Mattapan would dilute Black voting power in his district too far, nor Baker, who views all of this as an attack against him and doesn’t want his neighborhoods split up, is particularly keen to make this full swap.

“I’m on the menu,” Baker complained. “This district that you guys are all forcing on District 3 is laughable.”

Baker, who found himself increasingly on a political island only populated by himself and City Councilor Erin Murphy, who both argued with Breadon for large portions of the day.

The morning was taken up with questions and answers with the experts and then something unusual happened in the council that introduced five maps: Right around 24 hours before the meeting at which they’re slated to vote, members began to discuss possible trades and compromises.

For about two hours they put their heads down and haggled over the D2/D3 line and the D3/D4 line, trying different arrays of precincts, with different councilors putting forth assorted ideas.

But then they had to break up to go to a different hearing in City Hall and several headed off to a meeting about anti-violence efforts with the mayor in Franklin Field — and the momentum left with them.

The 3:30 p.m. restart of the meeting came and went with few councilors back in the room besides the fuming Baker and Murphy. Baker used his phone and the public-address system to play Frank Sinatra’s “A Man Alone” to the largely empty room, and then circular arguments resumed when other councilors trickled back in.

Breadon eventually called the meeting to a close around 5:30 p.m., saying, “At this point we’re not actually advancing the conversation,” and that she’d have a committee report with a final proposal for Wednesday’s meeting.

She told Baker to wrap it up as he tried to shoot some more questions at Flynn — causing Baker to storm off, saying, “I thought you were going to be fair.”