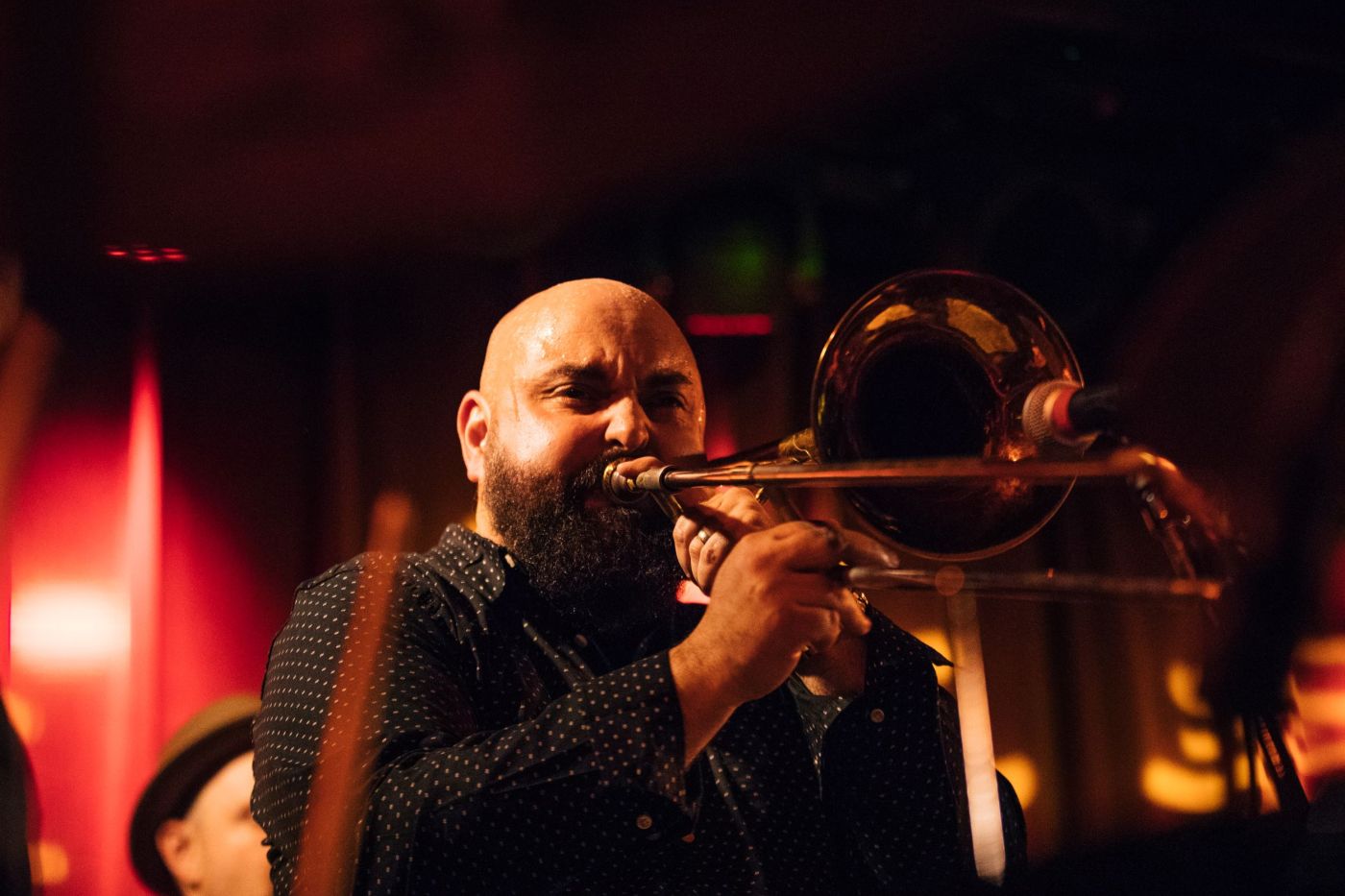 In the ’60s, Manhattan hosted some of the greatest jazz music ever performed: Count Basie at Birdland, Thad Jones at the Village Vanguard, Miles Davis anywhere and everywhere. But back then Brian Thomas’ dad spent more time across the river.

“My father talks about living in Manhattan and heading over to New Jersey to hear bands based in the Hammond B3 tradition, like Groove Holmes, Jack McDuff, Jimmy Smith, Jimmy McGriff,” Thomas told the Herald. “So when I started listening to jazz a lot of my first exposure, even before Miles Davis or some of the more traditional gateway musicians, was to this stuff.”

Thomas’ pop’s love of the soul-jazz masters can be heard all over “On the Bone,” trombonist Brian Thomas’ new album, out Jan. 27.

The younger Thomas grew up in upstate New York but much of his education took place in Boston, specifically at Wally’s, the city’s legendary jazz club. During the early 2000s (and beyond), Thomas graduated to touring and recording with a host of Boston (or Boston adjacent) acts – reggae outfit John Brown’s Body, blues/roots/hip hop act G. Love & Special Sauce, jazz funk kings Lettuce and more.

Tracing a similar path as millions of American kids, Thomas moved through the jam band scene and toward more traditional jazz. A lot of his more recent stuff with the BT ALC Big Band – an 18-piece ensemble he co-leads with trumpeter Alex Lee-Clark – nods heavily to soul-jazz. But “On the Bone,” Thomas’ first album under his own name, charges right into the retro grooves of his first love.

“Soul-jazz has a different feel, a different pop to it,” he said. “In some ways, I feel jazz lost its way when it became more formalized and there was less interaction with the crowd. I love when you hear some of these old soul-jazz records and you can hear the audience hootin’ and hollerin’ in the background.”

Translation: You can dance to “On the Bone.”

Thomas has a strategy for writing in a style with a distinctive sound yet not sounding flat or derivative.

“You have to keep in mind the instrumentation and the power of the organ, the kind of bass lines that are written for the organ instead of for the bass,” said Thomas, who also directs all of the instrumental ensembles at Canton High School. “I start with playing on an organ I have in my basement and come up with a chord progression or a groove or a bass line. Often for this kind of stuff, that comes before the melody.”

“It’s got to feel good,” he added. “One of the keys is settling in on how (a song) feels… how does the vibe make the musicians feel, how does it make the audience feel.”

The audience is going to feel great, partly because the musicians sound like they are digging the tunes. The core band on “On on Bone” features local aces Darby Wolf on Hammond B3 organ, guitarist Johnny Trama, drummer Tom Arey, and percussionist Yahubu Garcia-Torres. Thomas spotlights two saxophonists on the record, alto player Scott Mayo and tenor Mike Tucker.

Another special guest, the vibe of his dad’s old record collection. One song, “Orange Bug,” is even named for an orange cassette tape Thomas loved as a kid, a set by tenor sax player Willis Jackson.

“There’s no question my father was the first to expose me to these sounds,” Thomas said.