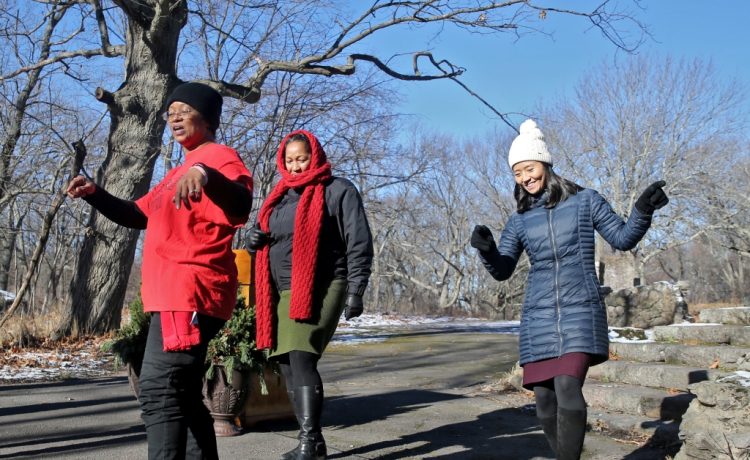 An “action plan” for Franklin Park proposes a park administrator, a reconfiguration of Circuit Drive and widespread general sprucings-up to what’s by far the city’s largest green space as safety concerns continue.

“Our goal is to ensure that Franklin Park today is as beautiful and accessible as any space in the city,” Wu said in a press conference on Tuesday.

The 527-acre park — which contains, among various other fields and features, a zoo and a golf course — right in the middle of Boston is in line for a facelift years in the making and with a still-to-be-determined price tag. The city dropped a lengthy “action plan” this week and is taking public input for the next two months about what exactly it should involve.

But in the tome that is the plan, there’s talk about “restoring” various parts of the park, fixing up neglected areas, getting rid of invasive species and fixing up the Overlook Ruins where the press conference was held and the nearby Elma Lewis Playhouse.

“The recommendations in this plan will make the park more inviting to both longtime users and new visitors,” Ryan Woods, the city’s aptly named parks commissioner, said. He added that the city plans on focusing on making entrances and edges to the park clearer and more inviting.

At a whopping 455 pages — the first couple hundred are largely throat-clearing about how we got to this point — the Franklin Park “action plan” dwarfs even the 362-page Boston Common master plan draft that the city lugged out in October.

Both of these projects, in theory, will happen contemporaneously over the next several to many years, with the opening items showing up in the coming fiscal year’s capital budget that has to be passed by July. Each already has a large bit of seed money, with a parking-garage sale downtown kicking $23 million to the Common and $28 million to Franklin Park.

The city has been loathe to put a price tag on either, though the Common is expected to end up costing north of $100 million.

“That’s definitely not going to be enough,” Environmental Chief Mariama White-Hammond said of the $28 million for Franklin Park, adding that the city really needs to get past the public-comment period to get the full picture.

Many of the locals who bundled up and came out to the press conference at the Overlook Ruins in the western portion of the park in Boston’s Emerald Necklace — and subsequently were treated to five minutes of guided yoga to open the presser and then the mayor participating in a line-dancing session to wrap it —  murmured happily as Wu and others including Woods and White-Hammond talked about what’s to come.

But not all were so thrilled. Renee Welch, who said she’s lived near the park her whole life and recently helped start a “Keep Franklin Park Safe” Facebook group, said safety fears abound in the huge park, where she said she has cleaned up needles from people shooting up there.

“I don’t come to the park,” she told reporters after the press conference, in which she asked Wu and company to talk about what they’re doing to keep it safer. “Why would I come to the park if I don’t feel safe?”

In October, longtime Boston activist Jean McGuire, 91, was assaulted in the park as she walked her dog.

Officials said improved lighting and signage will help with safety, but Wu added that addressing the “root causes” of issues such as drug use and homelessness will also play a big part because, she said, “Our public parks have always been that final kind of catchment area for the needs that are spilling over, where they’re not being met in other places.”