Bowtied bumkissers out to rewrite history, their way – Boston Herald 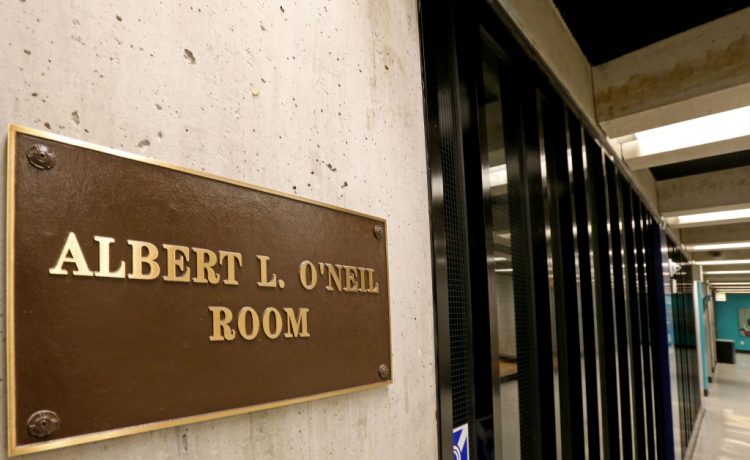 First they came for Tom Yawkey and I said nothing.

Then they came for Christopher Columbus and I said nothing.

But then they came for Dapper O’Neil and – now you’re walking on the fightin’ side of me, hoss.

In case you missed it, an obscure former coat holder for a forgotten-but-not-gone former Boston city councilor named Charles “Don’t Call Me Chuck!” Yancey is demanding that the city pull the name of former City Councilor Albert Leo “Dapper” O’Neil from a hearing room at City Hall.

Another non-negotiable demand was that the name of another deceased city councilor, Jimmy Kelly, be removed from the Broadway Bridge.

No one paid much attention to the original news, but then the blow-in drifters at the failing Boston Globe decided to get in on the gag. The legacy hires from the protected classes ran an editorial blasting “Ole Dap,” as the license plate on his automobile read, just to the right of the bumper sticker that said:

As Billy Bulger used to say, “Dapper O’Neil is a city councilor at large… in more ways than one.”

So the comrades at the dying broadsheet don’t much like Dapper O’Neil. They never did.

But remember, these are the same trust-funders who not so long ago named Monica Cannon Grant “Bostonian of the Year” – just before the feds charged the larger-than-large BLM grifter with mail fraud, wire fraud, etc. etc. In all, an 18-count indictment.

So yeah, the Globe really knows how to pick ‘em.

Just to select one line at random from the second paragraph of the Dapper indictment, I mean editorial:

“One council staffer filed a sexual harassment suit against him.”

Are the blow-in drifters in the employ of 73-year-old John Henry and his 44-year-old third trophy wife not aware that there is an empty mausoleum of a building in Boston known as the Edward M. Kennedy Institute for the U.S. Senate?

Do they understand that that white elephant is a monument to a politician, a Democrat like Dapper, who in fact drowned one of his brother’s former staffers while driving drunk? Does it ever occur to the pablum-puking rump swabs that their longtime hero is the only politician with an actual confirmed kill in the War on Women?

That “institute,” which annually hemorrhages almost as much money as the Globe itself, is right down Morrissey Boulevard from where the Globe used to be printed when it was still (almost) a real newspaper.

Has the Globe ever suggested stripping Fat Boy’s name off that preposterous monument to Democrat drunkenness and depravity?

Then there’s the late Rep. Gerry Studds. Boy, did the Globe worship that fiend, even after (or perhaps especially because) he was censured on a 420-3 vote by his US House colleagues after he was found guilty of plying an underage male Congressional page with alcohol and then sodomized him.

Before he started grooming young boys at the Capitol, Studds was grooming them as a “master” at St. Paul’s School in New Hampshire. Do not doubt me – the school chronicled the Democrat statesman’s sordid list of perversions in a report that identified him as “Faculty 20.”

After that report, several of Studds’ victims sued “the haven for sexual predators,” as they called the elite prep school. I’d quote from the complaint about the unspeakable acts Studds performed upon them if I weren’t concerned about giving all the Beautiful People and assorted man-buns at the Globe a bad case of the vapors.

The point is, the feds named 842 square miles of the Gulf of Maine after this pederast – the Gerry E. Studds Stellwagen National Marine Sanctuary.

Has the Globe demanded that Studds’ name be removed from the Atlantic Ocean by the National Oceanic and Atmospheric Administration (NOAA)?

Poor Dapper. He doesn’t have NAMBLA or BLM or some such group to run cover for him at City Hall the way some of these other reprobates do. There seems little pushback from the mau-mauing against the Dap.

Jimmy Kelly, on the other hand, still has a constituency of sorts in Southie, almost 16 years after his death.

But Dapper was from Roxbury. His base is long gone. Later he moved to Roslindale, Ward 18 – “God’s country,” as he called it.

Monica Cannon Grant, the Globe’s Bostonian of the Year, grew wealthy on her radical-chic flim-flams and white-guilt scams. As for Dapper – he never owned any property. He lived in a rented third-floor walk-up on Washington Street.

Likewise, he never opened a checking account. He was just following in the footsteps of his hero, James Michael Curley.

I remember the night Dapper finally lost. It was 1999. He’d always relied on a big vote out of Wards 6 and 7, but that year Southie was trying to elect one of its own, Michael “Baby Flats” Flaherty, to the Council.

So the word went out – give “Baby Flats” the bullet, meaning, only use one of the four votes you had for at-large Council candidates. Dapper’s vote collapsed (it didn’t help that he was almost 80, and sick) and he lost his seat.

As the results came in, a few of us went to his office to break the news to him. There was Mayor Menino, and Jimmy Kelly and me. Dapper just sat in his chair, under the portrait of Curley. He said nothing, but the tears were rolling down his cheeks.

None of us knew what to say. There was nothing that could console him. The job was his whole life. His sister Gert was dead, his dog Roger was dead, he lived alone. He had no children.

“Dapper, you didn’t do anything wrong. You didn’t change. The city changed.”

Jimmy was right. The city had changed, and boy has it changed even more since then. But one thing hasn’t changed – the bow-tied bum kissers at the Boston Globe.

They were wrong then, and they’re wrong now.