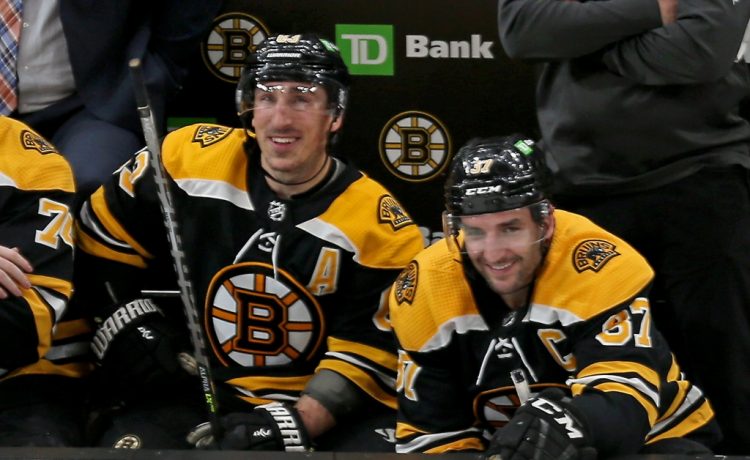 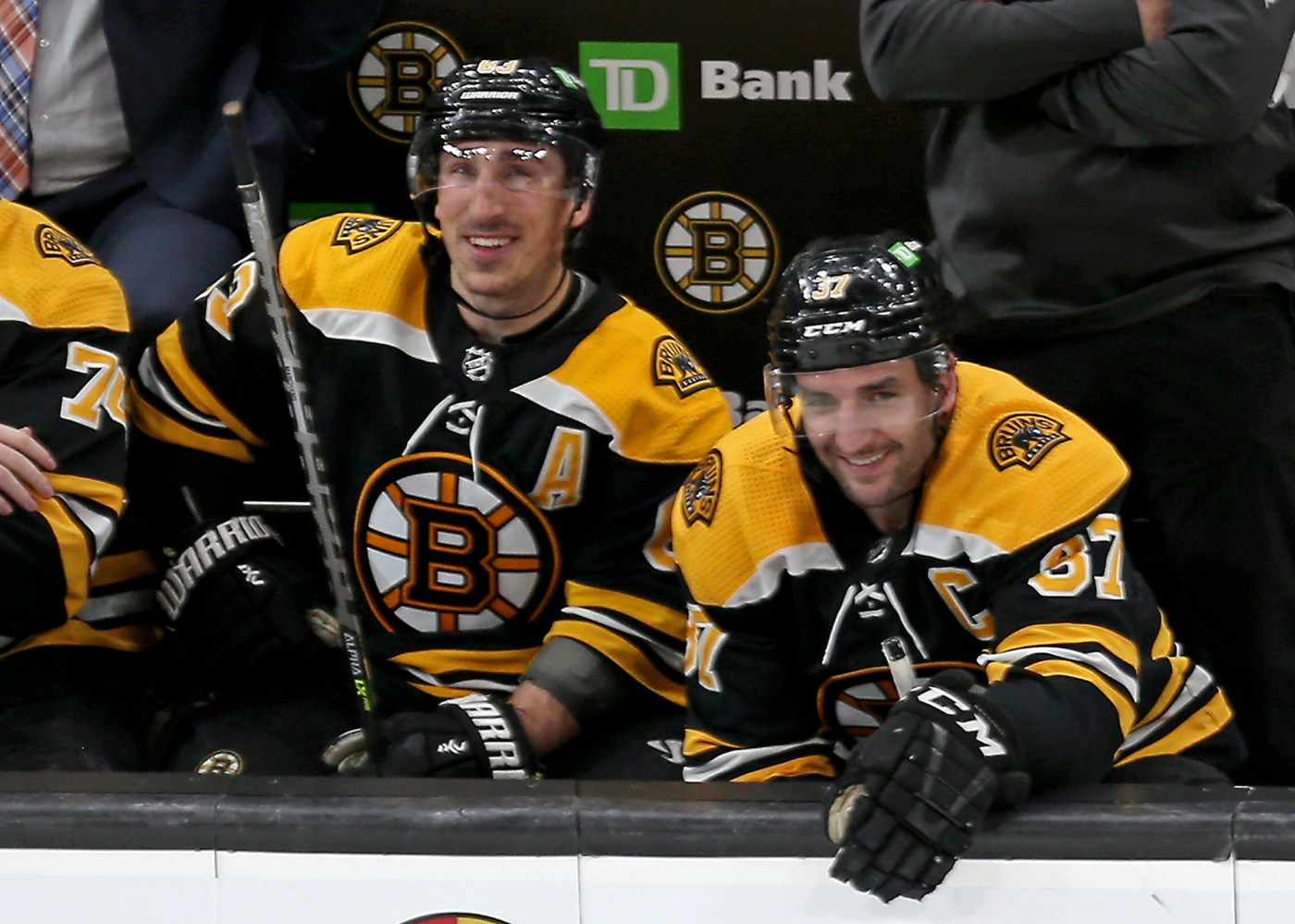 PLYMOUTH–Brad Marchand had a few words of advice for Pavel Zacha, who will be taking over Marchand’s familiar spot on the left side next to Patrice Bergeron to start training camp.

“Just get open and you don’t have to backcheck. He’ll do it for you,” said the Bruins’ star left wing.

Marchand, recuperating from double hip surgery, laughed when he said that. But he knows very well the plum gig that Zacha’s being given. It is a spot Marchand has inhabited for over a decade, but will not be able to play until around Thanksgiving, if all goes well.

After a slow rehab process throughout the summer, Marchand plans to take his first skate on Friday. From there, it will take a couple more months of work to get game-ready. It will have been four months since he’s skated, the longest he’s ever had to go without lacing them up.

“It’s going to be pretty much like learning how to skate again. It’s going to be really light for the first little while and hopefully progress each each week,” said the 34-year-old Marchand, speaking at the club’s annual golf tournament at Pinehills Golf Club.

Marchand said that the hips had been bothering him for a few years along with myriad core issues. He underwent a long put-off abdominal surgery two summers ago. Then it was a matter of when, not if he’d need the hip surgery.

“For me, what it came down to was trying to get as many years of my body being good and to do that, I had to do it sooner rather than later,” said Marcahnd. “That’s why we did it this year, and we finished (the playoffs) earlier than we thought we were going to. I figured that it was a good time to do it. And camp’s a little bit later this year as well, so it made sense to do it.”

Two players not expected in town until early next week before training camp officially opens on Tuesday with off-ice testing are David Pastrnak and David Krejci. The future of Pastrnak is the most pressing issue heading into camp. He’s in the final season of his contract. There’s plenty of speculation on whether he’ll sign an extension to stay in Boston, but both Marchand and Taylor Hall said that they haven’t tried to pry into Pastrnak’s thought process.

“Whatever way he’s leaning, even if he’s potentially looking at moving on, that’s not something he wants to talk about,” said Marchand. “If he’s going to sign, it’s going to get done. We’re not worried about it. The team clearly wants to get it done and has been very vocal about that. It’s obviously something we want to happen but we don’t need to add pressure on him to talk about it in the room., If he wants to, he’ll bring it up and that’s kind of how you leave it.”

Hall has gone through his share of contract issues before he arrived in Boston and knows to keep his distance.

“That’s his stuff,” said Hall. “I know that he loves being a Boston Bruin, I know he loves playing for fans and he’s an integral part of this city and really the fabric of sports in this city. I love playing with him. I have two more years after this year on my contract and I’d love nothing more than to play shotgun with David Pastrnak. So when I see if he brings it up, I’ll be interested to see what he says. But he’s got a lot of stuff that he has to negotiate and we’ll go from there. But he’s going to be ready and he’s going to be lights out like he always is.”

A “softer” approach under Montgomery?

Hall expressed surprised over the Bruce Cassidy firing, but was interested to see what new coach Jim Montgomery will be able to bring and possibly get out of some players.

“He seems like a guy that wants to have (a two-way dialogue) and maybe he wants to communicate a bit more,” said Hall. “And I don’t want to speak out of turn, and with Bruce, I had a lot of good moments with him. but there seems to be maybe more of a soft touch (with Montgomery). I don’t know. So we’ll see. I’m 30 now and I’ve played in the league a long time, so I can handle a lot of different styles of coaching so I’m interested to see what we have as a group.”

Marchand also spoke of a possible “softer” approach by Montgomery after the demanding Cassidy.

“It’s not something you ever want to see. You always take it personally, you feel like you could have done more, especially as a leader, to help out and get any message across that he’s trying to push,” said Marchand. “But in hockey at times, sometimes it’s just about a change. (Cassidy) was here for a long time and sometimes it’s just good to get a new voice and kind of switch it up, especially for the newer generation of players. They’re a little bit different and sometimes they need a little softer voice. That’s part of it all and unfortunately we’re all going to go through that at some point where there’s going to be a change or your time’s up. But it’s never fun to see.”

Hall excited, but proceeding with caution

Hall is clearly excited about the prospect of playing with David Krejci and David Pastrnak. One of the few offseason communications with Montgomery was a text that simply asked “Is Krejci coming back?’”

But Hall didn’t want to get too far ahead of himself dreaming about the pinball numbers the line could produce.

“The goals will come and the plays will happen, but for us, we have to get the puck back. We have to be a line that can be relied on defensively and in all three zones,” said Hall. “It’s given me a boost in my step to know that that could be a line that could do a lot of damage this year. That’s not to say that with (Erik) Haula last year we didn’t do some really good things because we did. But Krech is a great player and hes been a lifelong Bruin. He’s a guy that has a lot of stature in our locker room. And we’re going to rely on him to play well, play well defensively, to give us leadership.”

Hall said he had no health issues coming into the season. He also knows the onus will be on players like him to keep the team above water while Marchand, Charlie McAvoy and Matt Grzelcyk get healthy.

“I don’t have any excuses coming into the season. I’m not dealing with anything,” said Hall. “There’s obviously a lot of opportunity for me personally. There are some players out who are marquee players for our team. For guys like myself, there’s going to be a lot of opportunity – opportunity to lead, to play prime-time spots and it’s really exciting for me. I’ve got to take advantage of that. And there’s a little bit of pressure on guys like myself to fill those spots and to come into the year and be a guy that can be relied on.”