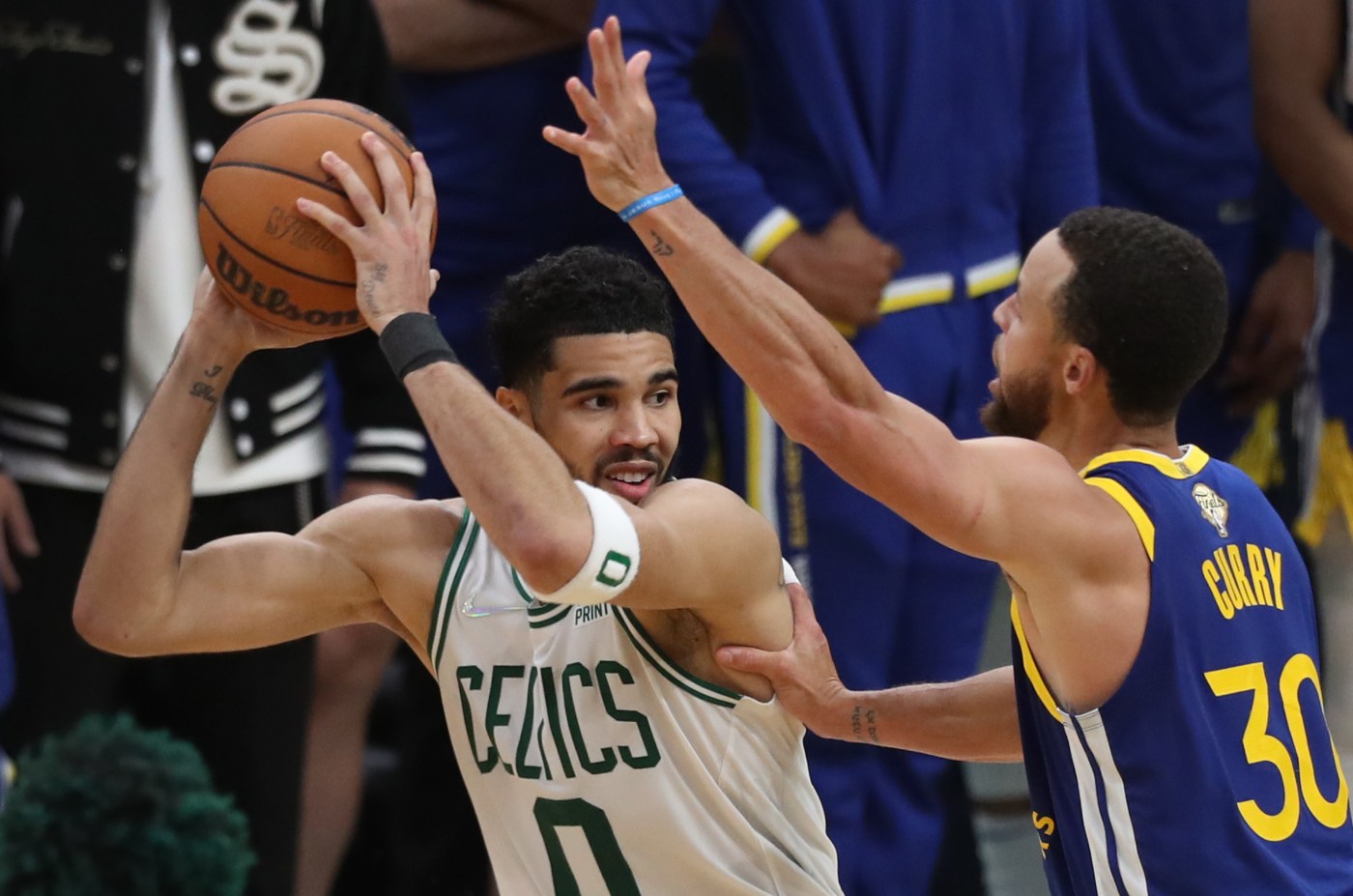 By Brad Stevens’ own estimation, Celtics management has to thread a needle this summer.

By coming within two wins of the 18th NBA title in franchise history, after executing the grandest in-season turnaround in franchise history by going 33-10 after Jan. 6, when they fell to 18-21 after blowing a 29-point lead in New York, the Celtics president of basketball operations now finds himself in a strange in-between state where improving the team is concerned.

They did just about everything right after Jan. 6, starting with the acquisitions of Derrick White and Daniel Theis at the start of the trade deadline. They finally started playing defense the way rookie coach Ime Udoka demanded, and led the league with a choking network of switches as a result. They started moving the ball, and became a Top 10 offensive team. They swept the Nets in the playoffs, weathered a pair of grueling seven-game series against the Bucks and Heat and, well, had their weaknesses exposed by Golden State in the Finals.

So Stevens has to strike a narrow balance when making decisions this summer. He may have to trade a beloved player — yes, maybe even Marcus Smart or Grant Williams — to make this team better.

Maybe he adds a valuable free agent without disrupting his core.

“Draft, develop and deals,” Stevens said earlier this week. “You just look for things that make the most sense within your group. I think we have to walk a fine line a little bit. I think teams are fragile. I think the way teams work together and operate together are fragile. And I think your identity as a team, when you find one that’s successful, which we did this year on the defensive end of the floor and when we were at our best sharing the ball offensively, those things are fragile.

“So just to add doesn’t mean that you’re not taking something away from the group. And to change significant pieces in the group doesn’t mean that that might not totally take your identity and shift it in a direction that’s not as successful,” he said. “And so it’s quite a fine line.”

But it’s clear to Stevens that those Finals issues of ball security, playmaking and shooting depth have to somehow be addressed.

“If you ask me right now what we need, I’d like to have a little bit more scoring – consistent scoring – off the bench,” he said. “I think we have some short-term needs there, but I believe in a couple of the guys that didn’t get a chance to play as much, that they will continue to improve and be knocking on that door soon. So we have some development opportunities within our own organization and we’ll continue to scour and look at what our opportunities are with our trade exceptions and the draft and our limited resources in free agency.”

Aaron Nesmith has been two things – a whirlwind of promising defensive energy with great promise as an off-the-ball scorer, and a great practice shooter who can’t buy a bucket in regular-season games. As the 14th pick in the 2020 draft,  he was considered the best pure shooter of the lot, and that’s still why there’s hope for him cracking a role off the bench.

“I’m still very confident in my shot. I’m a phenomenal shooter and I know that, the team knows that, coaching staff knows that,” he said last week. “So just wasn’t there this season. In practice, it’s there. In workouts, it’s there. It’s just as soon as the game starts, it’s mental of pressing and putting a lot more pressure on each shot that I take because I haven’t been making them, instead of just shooting the ball the way I shoot it every single day. So that’s why I just say I’m needing to take that mental break and get back to doing what I do at a high level during games.”

That would fill a big need for Stevens, whose quest for more shooting is also likely to take him out on the free agent market this summer.

But he was right this season about Payton Pritchard, and had confidence in trading Dennis Schroder to Houston with the belief Pritchard could fill that shooting void. Sure enough, Pritchard’s shooting off the bench played a major role last spring until, like everyone else, he got swallowed up by those offensive breakdowns. Alas, the Celtics got five points from their bench in Game 6 of the Finals. If there’s growth in that lineup – Sam Hauser and Matt Ryan are promising shooters – it hasn’t quite sprouted yet.

Roughly $19 million of the $26 million Al Horford would be due next season is guaranteed, but his value to the Celtics at both ends considered, would the savings be worth moving on from the 36-year-old? Beyond being packaged into a trade for a young big – Atlanta’s John Collins’ name has popped up across the league – he’s more likely to stay put.

And the stashed prospects still need time. Yam Madar showed offensive development as a point guard for Partizan in Belgrade, Serbia, but his physical (thin) limitations point to another season overseas. He’s certainly not ready to help an NBA finalist. Juhann Begarin has what Madar does not – tremendous physical upside, especially defensively and at the rim – but did little during his time with Paris Basket to show he’s advanced beyond a raw prospect.

Madar will work with the Israeli national team this summer; Begarin will be on display at the head of the Celtics’ roster in the Las Vegas Summer League in early July.

Stevens’ tools include a pile of traded player exceptions, with a $17.1 million TPE – courtesy of last year’s Evan Fournier sign-and-trade with the Knicks – the prize in the event of a major trade. He’ll also have a taxpayer’s mid-level exception that will be approximately $6.1 million, and, of course, some valuable trade assets.

Any lingering talk about a Jaylen Brown/Bradley Beal swap should finally be buried, and not just because the latter seems committed to re-signing with Washington. Brown has to work on his handle, but he’s an elite three-level scorer and the Celtics’ most dynamic option at the rim when they get out in transition. Though Jayson Tatum faded in the Finals, he is, indeed, the franchise – a legitimate Top 5 talent without a ceiling in sight.

Rob Williams could also be close to untouchable, especially as he continues to work on his toughness and availability. He is, at least as much as the NBA’s defensive Player of the Year, Marcus Smart, the reason the Celtics defend at an elite level.

And as much as he hates it, Smart will find his name in trade talk once again. Though Grant Williams is coming along nicely as Horford’s understudy – he’s eligible for a rookie extension this fall – here, too, is a player who would drum up significant interest elsewhere. Both are also part of the solution.

Beyond a major trade, though, when Stevens dips into the free agent market he’ll be looking for depth, not something transformative. He’s mentioned playmaking as a primary need, though this doesn’t necessarily mean the arrival of another point guard.

The passing and ball-handling issues emanated to a great degree from the mistakes of Tatum and Brown, though Smart and Derrick White did indeed have trouble calming down the unit late in the Finals. Smart and White also guard the position better than just about anyone who will be available with $6.1 mid-level exception.

Dallas’ Jalen Brunson is the cream of the crop, outside of Kyrie Irving’s anticipated availability, and he will command a max level price the Celtics probably aren’t willing or able to pay under cap restrictions. Ricky Rubio would fit what they can offer, though considering the defensive demand Udoka puts on his players, the veteran point guard may not be up to the challenge down the other end. Tyus Jones (Memphis) has playoff experience and has played his way up the ladder behind Ja Morant on a defensively gritty team. At this point Goran Dragic has played everywhere BUT Boston.

But as one of the league’s foremost proponents of positionless basketball, Stevens isn’t necessarily doing all of his math at point guard. Memphis’ Kyle Anderson, a 6-foot-9 playmaking forward/jack of all trades type who came off the bench for the Grizzlies this season, was considered by Danny Ainge with the 20th pick in the 2014 draft, before opting to pick James Young instead. Even then, the quest was for shooting. Udoka knows Anderson well, going back to their time together in San Antonio.

In truth, though, free agency could take the Celtics in any direction as they attempt to build offensive depth. Malik Monk celebrated his contract year with the Lakers by shooting 47.7% from 3-point range, and is probably worth more than the Celtics – at least up front – can afford. But he would fill a major need.

But for all of the calls on the outside for change, Stevens knows he’s not that far away from a title, with some tweaking of the lineup and perhaps nothing more on the horizon.

In truth, of course, what he needs is for Tatum and Brown to take the next step in their still-ridiculously young careers.

“You’ve gotta look at it and say, OK, big picture-wise, we finished the regular season as a Top 6 or 7 offense. We finished (with) obviously a great defense,” he said. “Our defense was good enough to win throughout the entire playoffs. Even though we slipped a little bit in the Golden State series, a lot of those baskets that separated being a great defense from a little bit below that were the fact that they scored in transition because of the turnovers. So I think that you have to take it all into account.

“That said, I think to improve, obviously I thought that we struggled against their switching, we struggled against their overhelp and their great, great activity, but there were a lot of factors that contributed to both the turnovers and to the 2-point shooting. If you would have told me going into the Golden State series that we’d shoot 41 percent from three, I would have thought that we’d have a heck of a chance of winning, obviously, but came up short.”

It won’t take much to get back there, either.